Joko Widodo’s government launched a manhunt for pro-independence fighters last month, deploying hundreds of troops to its contested easternmost territory after Indonesia’s intelligence chief was killed in an ambush on April 25.

The latest conflict has come with West Papua’s special autonomy status due to expire this year, sparking fresh calls for independence. 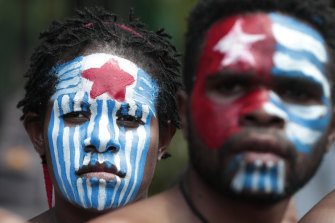 Papuan activists with their face painted in the colours of the separatist Morning Star flag rally in Jakarta last year.Credit:AP

Tensions have been high since the separatists’ shooting in April of two teachers suspected of being Indonesian spies and the burning of three schools in Beoga, Puncak.

Bambang Soesatyo, the speaker of the upper house in Jakarta, has called on Indonesia to “exterminate” the TPNPB and “talk about human rights later”. In May the Joko government designated the group as terrorists. 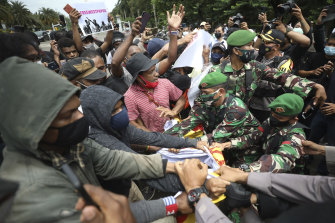 West Papuan activists scuffle with Indonesian soldiers and police officers trying to confiscate their banner during a rally calling for the remote region’s independence in Jakarta in December.Credit:AP

Speaking to The Sydney Morning Herald and The Age from Jayapura, Catholic priest Father John Djonga said community leaders had told military and police at a meeting in the Papua provincial capital that the new label would only intensify conflict.

“The church and the people strongly opposed the decision and asked the government to revoke the decision on classifying KKB as a terrorist group,” Djonga said using the Indonesian forces’ name for the armed groups.

“By treating them as terrorists, the military will be free to shoot anyone who is suspected as KKB.” 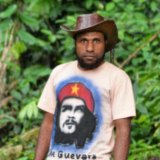 The meeting came in a climate of continuing suspicion over weeks of internet blackouts which Indonesia said were the result of a damaged underwater cable.

Indonesia’s crackdown in its resource-rich outpost has also included the detention of pro-independence leader Victor Yeimo, who was arrested last month, accused of organising the biggest mass demonstrations in years in 2019.

There has been low-level insurgency there since it was absorbed into Indonesia in 1969 by the so-called Act of Free Choice, a process disputed as a sham by independence advocates because the 1025 people selected to vote were chosen by then president Suharto’s military.

In 2001, special autonomy was granted to Papua and later West Papua province – the two are often referred to simply as West Papua. It allowed a local administration to “regulate and manage the interests of the local people” – excluding matters relating to foreign affairs, safety and defence, monetary and fiscal policy, religion and justice – and for Indonesia to support development with funding, which has totalled $9.5 billion since 2002. 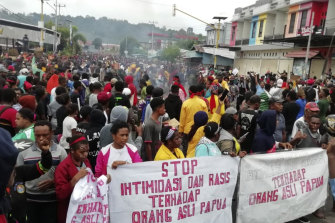 People display banners that read “Stop intimidation and racism towards indigenous Papuans” during a protest in Manokwari last year.Credit:AP

However, it was opposed by independence leader Theys Eluay, who was soon after assassinated by members of Indonesia’s special forces, and with the 20-year special autonomy term running out in November pro-independence Papuans have protested against its extension, arguing it restricts political freedoms in its existing form and offers no prospect of a future breakaway from Indonesia.

Indonesian authorities, meanwhile, have given themselves six months to pursue the 170 targeted rebels in Puncak, Intan Jaya and Nduga.

Arief Fajar Satria, the spokesman for security forces sent to Papua last month, said the joint police and military operation consisted of 1128 personnel and their strategy was “to wait for them to come out from their hiding” in the mountains.

“We have mapped out these fugitives based on their vital roles,” he said from Jakarta, to where he has returned along with many of the reinforcements. “They often do a bit of a hit and run strategy, just like when they put schools on fire.

Victor Mambo, a senior editor at media outlet Jubi Tabloid, said the number of people displaced had increased significantly since the declaration of the TPNPB as terrorists. Nudga and Intan Jaya, he said, were “like dead cities”, with no government activities or schools open and security forces using them as posts.

He cast doubt on whether security forces would be able to identify and capture the rebels on their wanted list.

Even if they are successful, however, it will do nothing to end a perennial crisis of trust.

“Until today, Papuans still see the Act of Free Choice as an act of annexation,” Mambo said.

“As long as we don’t settle this historical issue, nothing can be solved.”

The only way to achieve that is dialogue, according to Adriana Elizabeth, an expert on Papuan issues at the Indonesian Institute of Sciences who bemoans the fact there has been precious little of it over the years.

Having herself gathered representatives from different parties from 2011 to 2016 for informal discussions, she has suggested Jakarta should conduct talks with individual Papuan tribes as well as with the TPNPB.

Formal talks have, however, never materialised.

“To me, that is not the kind of dialogue they should have. I think they should first come together to discuss each of their problems.”