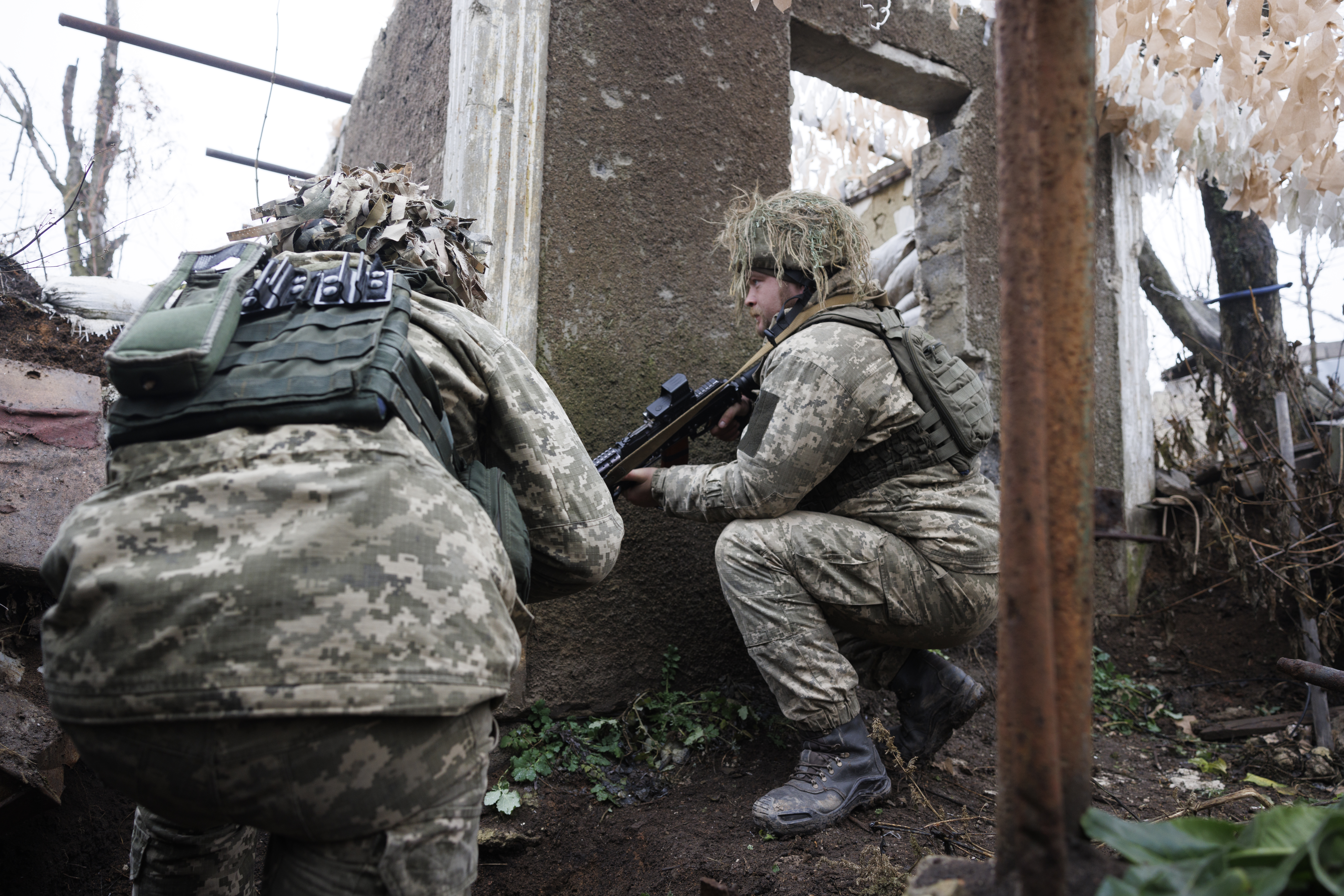 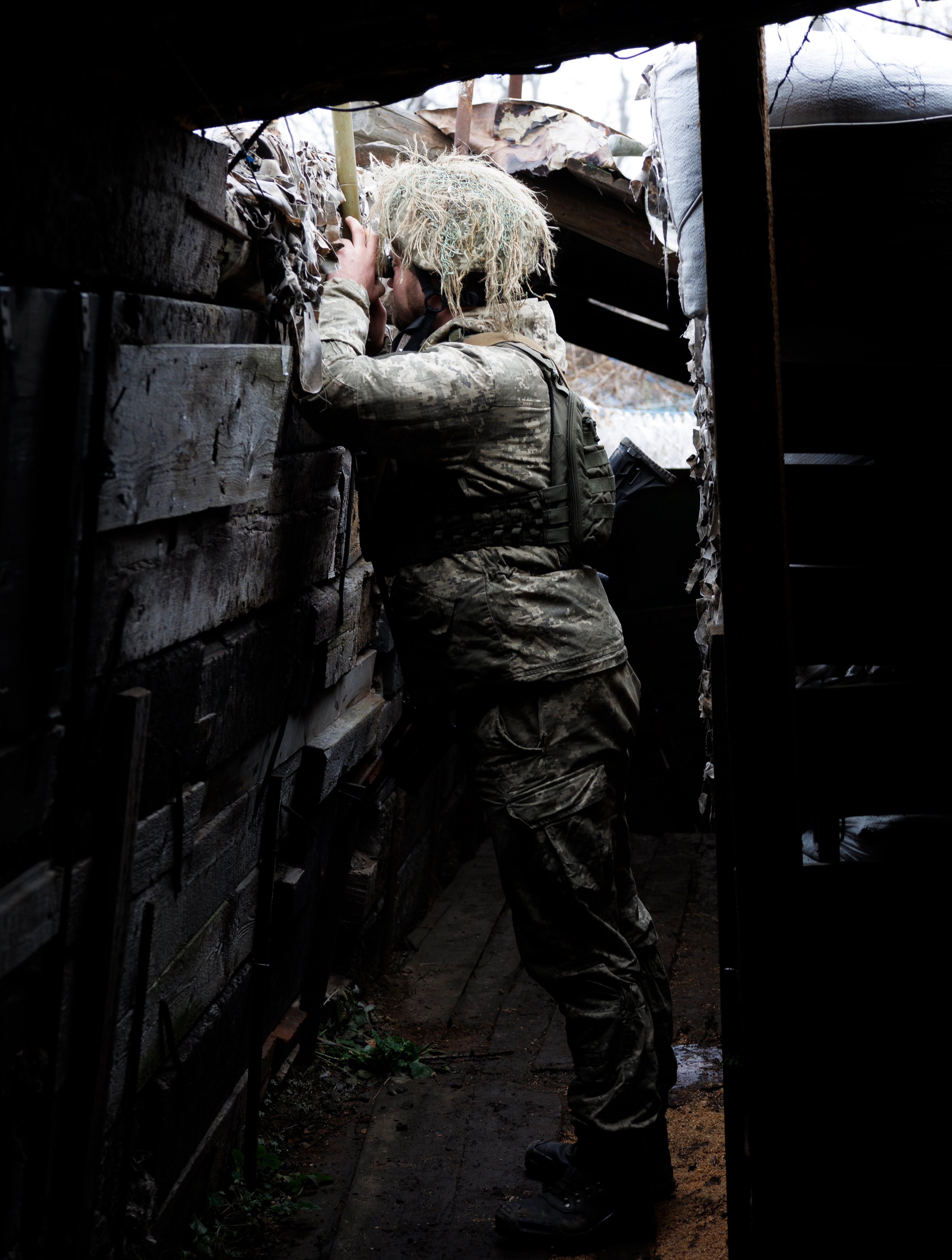 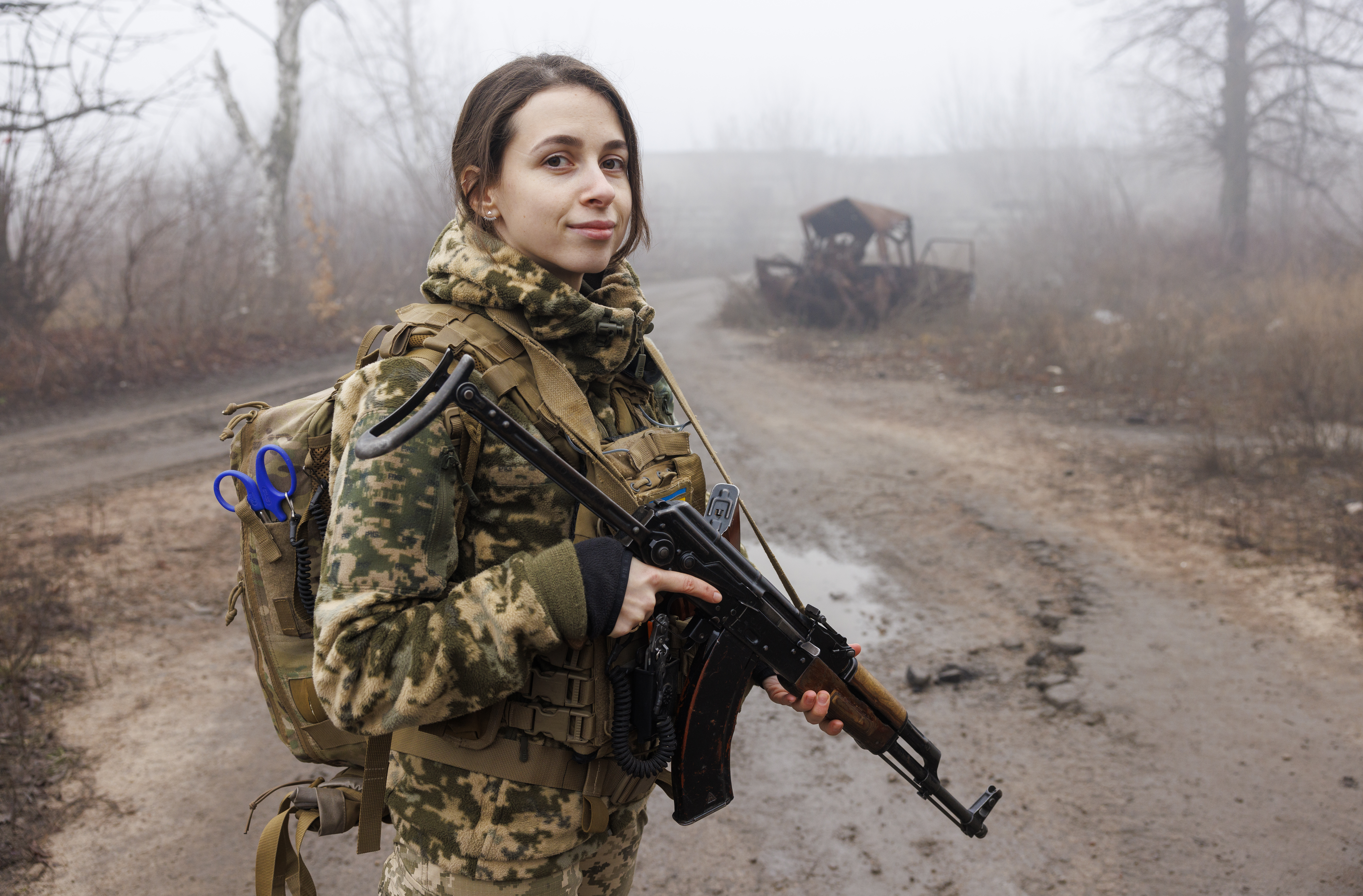 And shots rang out as the outgunned and outnumbered defenders vowed to hold back the menace threatening to trigger a World War III escalation.

A Russian heavy machine gunner opened up over the maze of barbed wire and sandbag defences through a pall of freezing fog as we took cover in a bunker.

But a burly Ukrainian lieutenant grabbed his Kalashnikov assault rifle to counter the threat – and shrugged: “The bastards are sending us their Christmas cards again.”

The quip typified the incredible resilience of the band of fighters who have held back the might of Russian-backed separatist forces for nearly eight years.

More than 13,000 from both sides have died in the bloody conflict which has evolved into a Somme-like stand-off along a 250-mile “contact line” snaking through contested Donbas.

The world has held its breath in recent weeks as Putin ordered his huge high-tech force ever closer to Ukraine’s borders.

Tensions had risen yesterday to the point where 444 breaches of a long-ignored ceasefire were recorded within 24 hours.

WELCOME TO THE WORLD

Military experts believe the defenders will be quickly overrun by the sheer scale of Russia’s land, sea and air power.

But Ukrainian morale was high in the dank trenches in the frontline town of Avdiyivka yesterday.

Crack 25th Airborne Brigade soldiers have built an astonishing array of hybrid fortifications around the ruins of a bomb-blasted industrial estate.

Commanders communicate using antique wind-up phones wired together in mud-clogged trenches lined with duck boards which are identical to the trenches of 100 year ago.

The primitive phones are used because it is impossible for the Russians to hack into calls.

Yet the zig-zagging defensive line is ringed with hidden cameras relaying every movement of the enemy to batteries of computer screens.

And drones from both sides fill the sky ensuring no soldier can operate without the scrutiny of a hovering electronic eye.

Senior Lieutenant Mihail, 25, who – like all troops serving here declined to give his family name – told The Sun: “It looks like we have turned the clock back more than 100 years.

“But technology and battlefield tactics have come a very long way since then and we have had eight years to prepare our welcome for the Russian forces should they attack.

“We are well trained and know exactly how we will respond – and can guarantee we will take many lives.

“There is shooting here every day and there is never a single moment when you feel safe but we are fired up and ready to resist.

We joined surveillance teams amid a bullet-riddled jumble of smashed factory machinery in hides just a few feet from the Russians and peered through periscopes at the enemy.

The device was proffered with the warning that raising your head to peek through a window at such close quarters invites instant death from a sniper’s bullet. 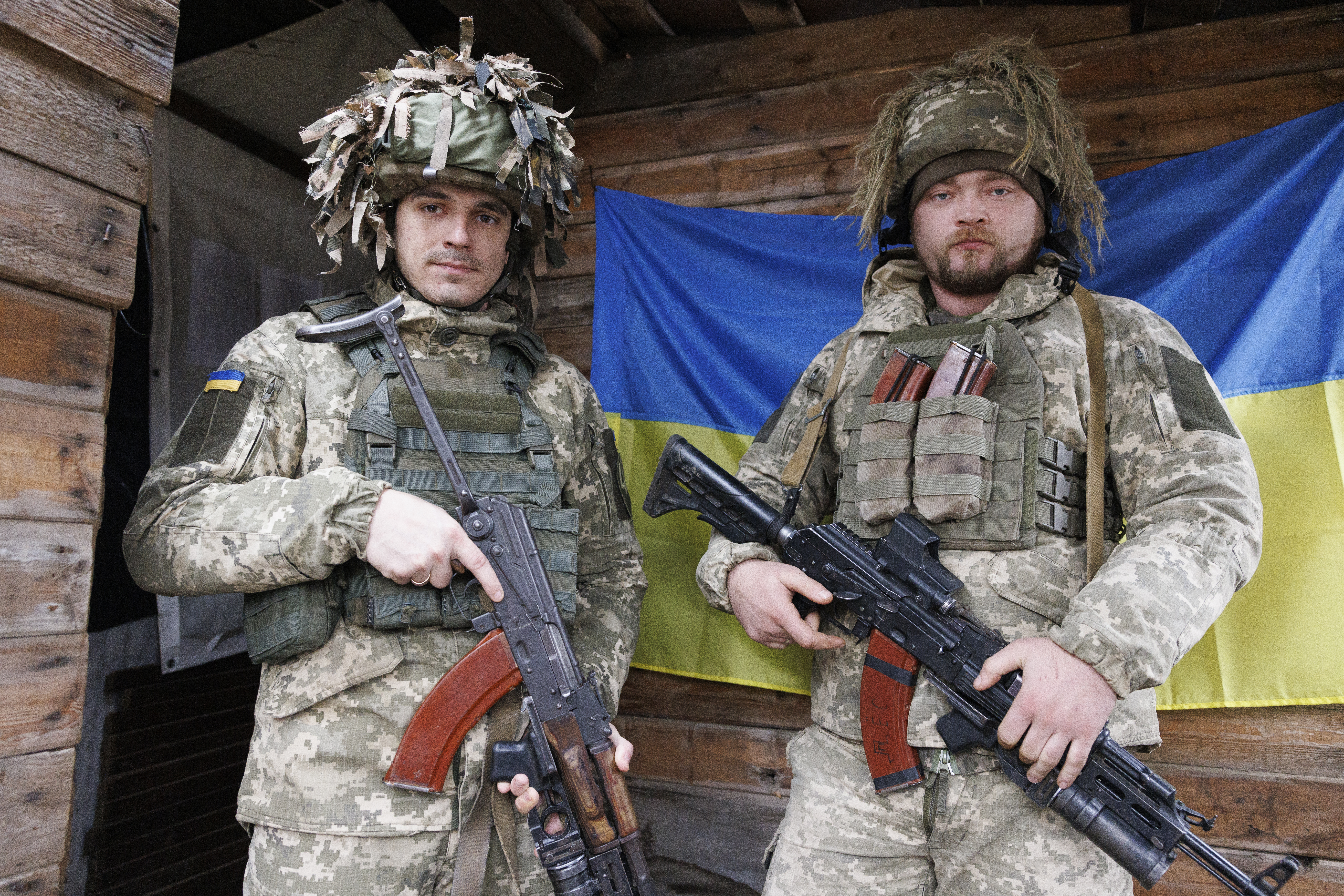 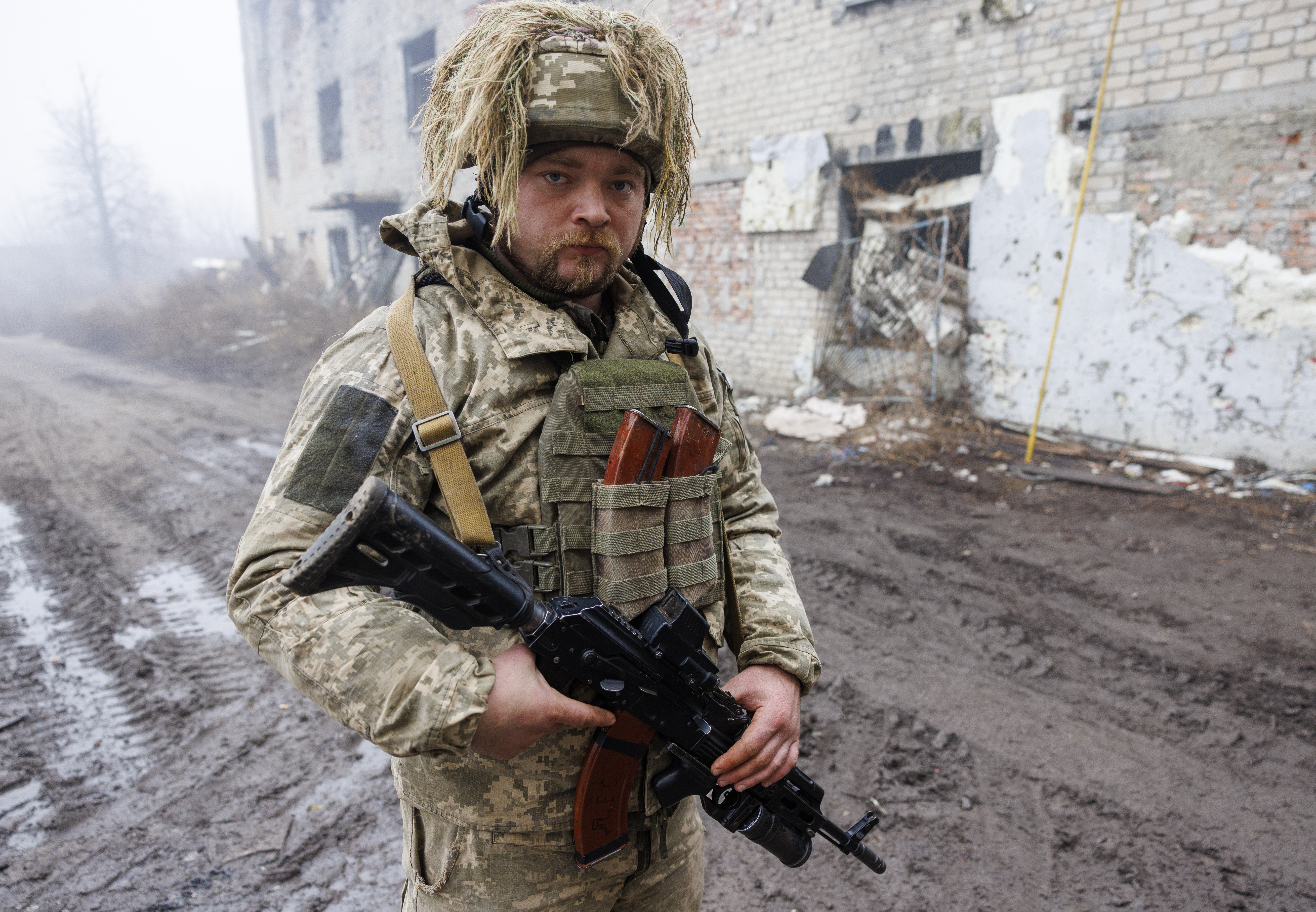 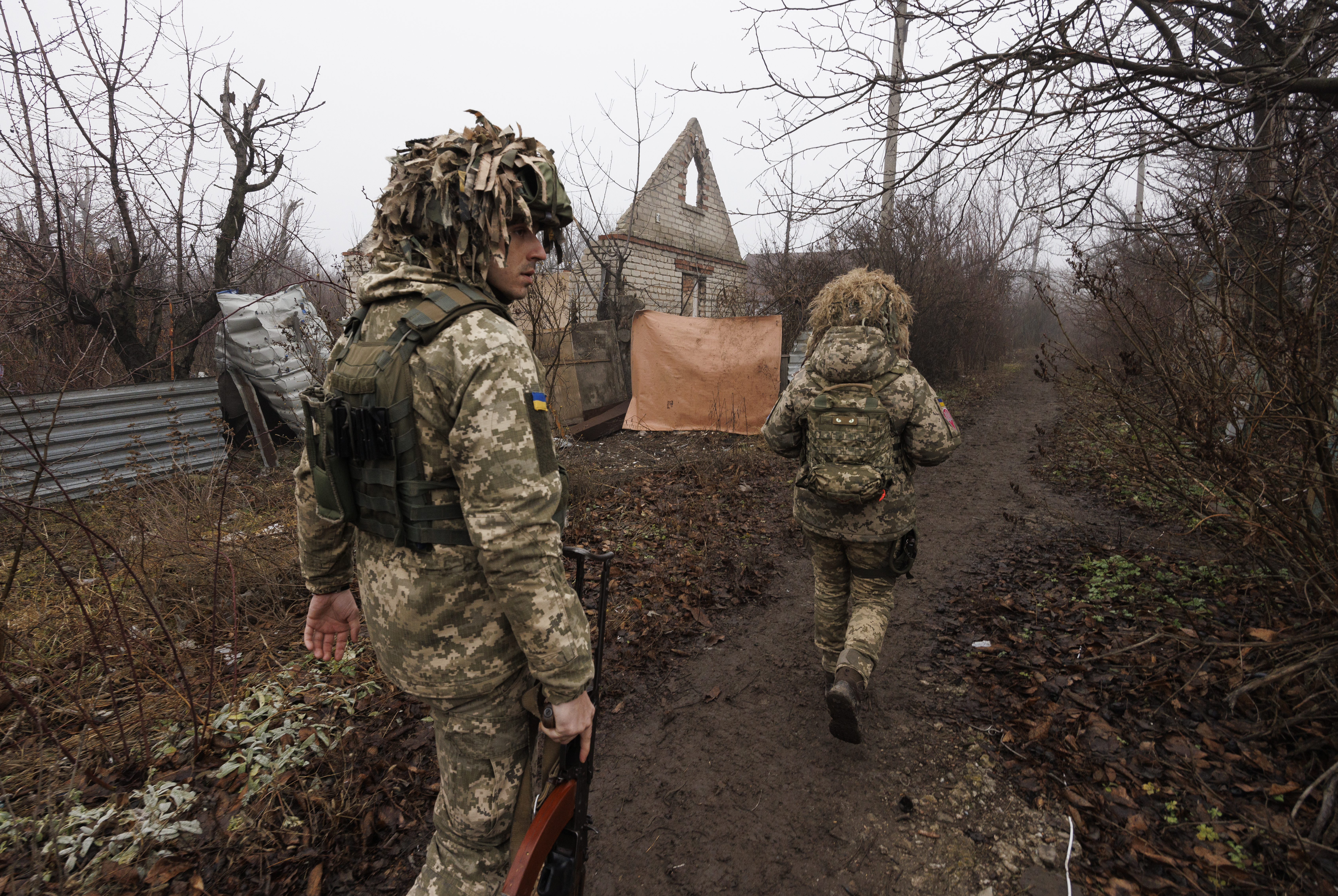 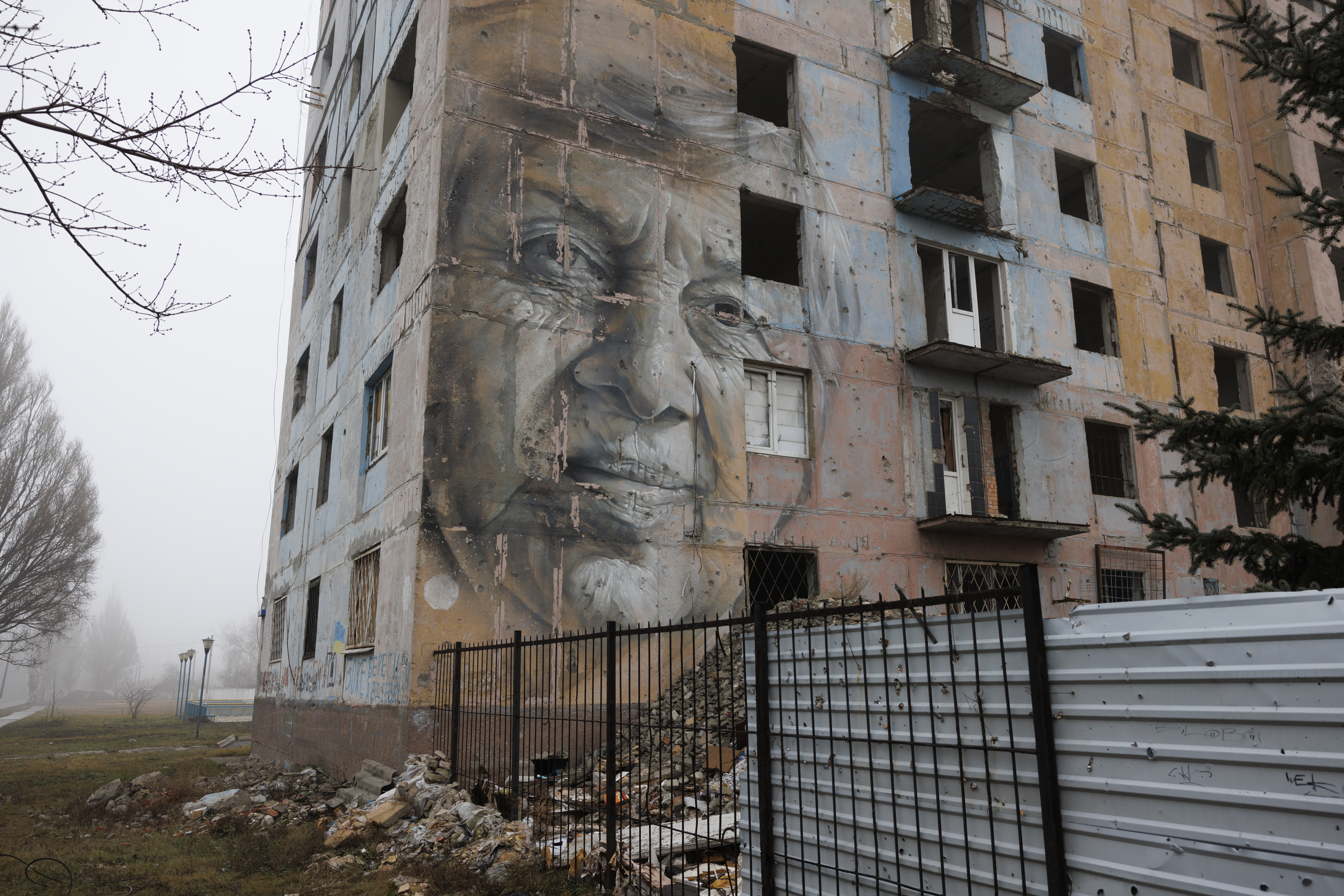 Bearded Airborne Brigade Lieutenant Alexander, 27, guided us through a swamp of mud and spent bullet casings to a trench with a clear line of sight to the enemy 100 metres away.

He said: “It’s trench warfare like you see in movies about World War One – but with drones, hidden cameras and computer screens.

“They recently detected one of our CCTV cameras watching them and let us know by sending a drone to do a little dance in front of its lens.

“So we blew their drone out of the sky immediately – and sent a fiery hello to its operator after locating his position.

“The Russian know we are defending this position rather than attacking and have even sent men to taunt us by actually banging on the metal door between us and them.

“We are like next door neighbours who hate each other and try to kill each other every day.”

A steady trickle of casualties on both sides threatens to turn into a flood should full-scale war erupt again. At least 52 Ukrainians have been killed in the trenches since July.

Putin – seeking to distract from covid and economic woes at home – has painted his most western neighbour as a rogue state conspiring against him.

More than 1,000 tanks and armoured vehicles and more than 2,000 military personnel have joined live fire exercises just 22 miles from the Ukrainian border.

In an even more worrying sign, Russian chiefs ordered field hospitals to be built closer to the border, suggesting a bloody conflict was imminent..

And fears of a wider global conflict spiralled as Russia yesterday carried our a new test on its “unstoppable” 6,670 mph hypersonic Zircon missile.

Putin’s forces now surround Ukraine along its eastern, northern and southern borders amid fears his aim is to march on capital Kiev.

His invasion would begin with a warjet, rocket and artillery blitz aimed initially at ammunition depots and up to 15 brigades of dug-in Ukrainians leading the defence.

Pro-Russian separatist soldiers in Donetsk and neighbouring Luhansk will then lead a ground offensive – while pro-Putin forces from Belarus in the north strike out towards Kiev.

But at least 300,000 Ukrainian veterans have vowed to take up arms and fight a house-to-house guerilla war.

And Britain, the US and their NATO allies will come under enormous pressure to weigh in with military backing and “boots on the ground”.

A frontline Ukrainian commander told The Sun last night The West must help hold back the Russian tide – or face being overrun, in turn, by Putin’s hordes.

Brigadier General Anatoly Shevchenko told The Sun: “If Putin’s soldiers take Ukraine, the whole of Europe will know the smell of war we have endured for eight long years.

“For us it is a fight we must not lose – to live our lives like civilised people in western Europe – or be trapped forever in the shadow of Russia.

“We will never be slaves to Putin and will fight to our last breath and our last bullet to stay free, no matter what the odds.

“They have superior numbers and firepower but we have high morale and right on our side – and an army of civilians ready to rise up and fight for every millimetre of ground.”

Shevchenko – a war hero whose crack commandos pushed back Russian invaders in 2014 until a shaky ceasefire deal was brokered – added: ”Putin should be under no illusion that hundreds of thousands will die if this conflict escalates.

“And I vow today that many of those dead will be Russian if that happens.”
Tensions spiralled further as British troops were given the green light to join forces with Ukraine in a move which infuriated the scheming strongman Putin.

Brits will stand shoulder-to-shoulder with crack units from the US, Poland, Romania and other nations in 10 major war game battles alongside Ukrainian comrades.

More than 11,500 military personnel from foreign nations will team up with 21,000 local troops in the military operations next year.

Ukrainian President Volodymyr Zelenskiy announced the show of strength knowing it would rile Russian strongman Vladimir Putin – who could now order an invasion from the east within days.

Putin has demanded a cast-iron assurance from the US and Britain that Ukraine will not join the NATO alliance of Western powers while threatening to invade.

US President Joe Biden and Boris Johnson refused to back down and said membership would be decided by Ukraine and NATO.

NATO vowed to do everything necessary “to defend and protect” Ukraine yesterday (Thurs) amid mounting fears of a Russian invasion.

Secretary General Jens Stoltenberg said: “We see no sign that this build-up is stopping or slowing down.

“It is provocative. It is destabilising. And it undermines security in Europe.” 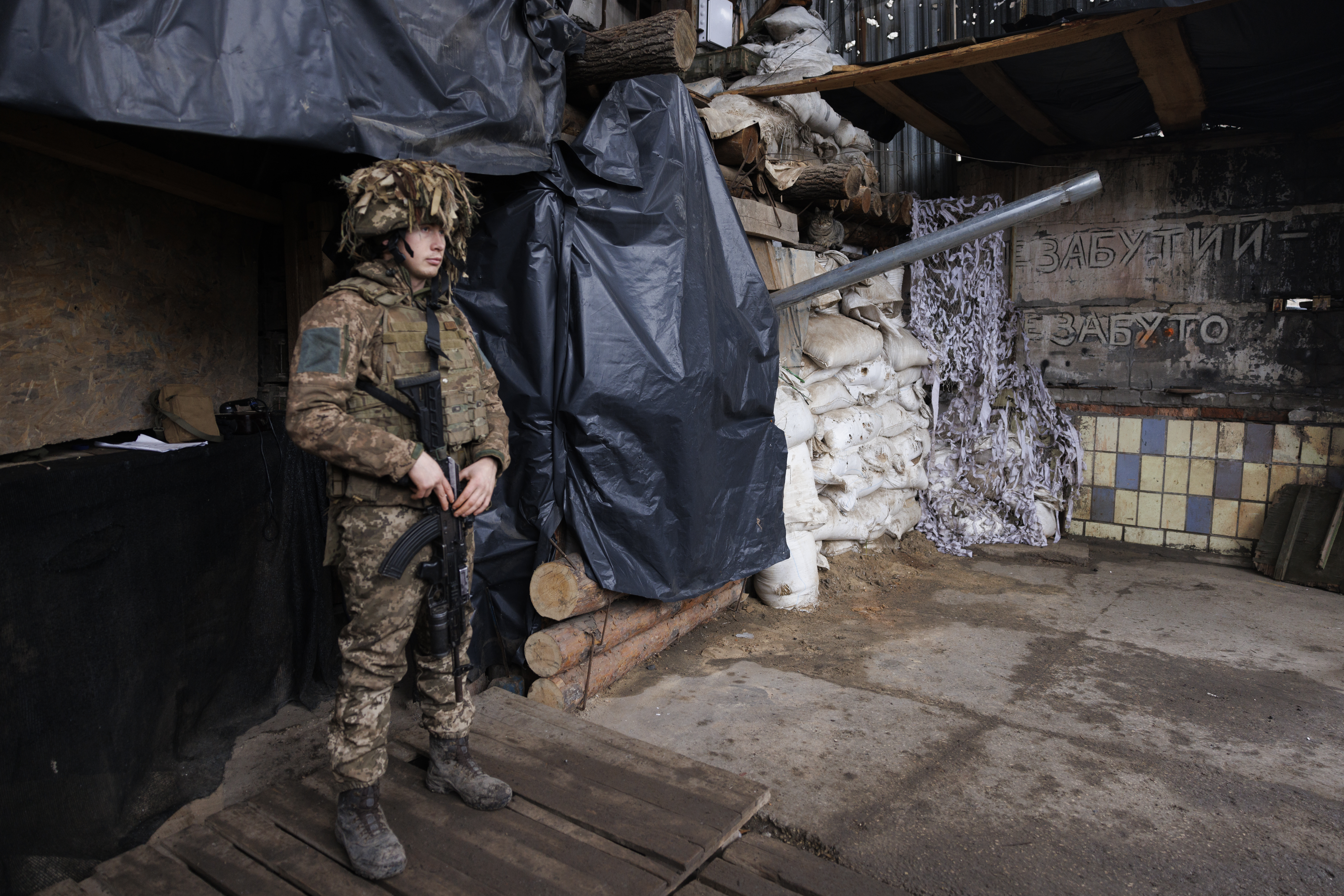 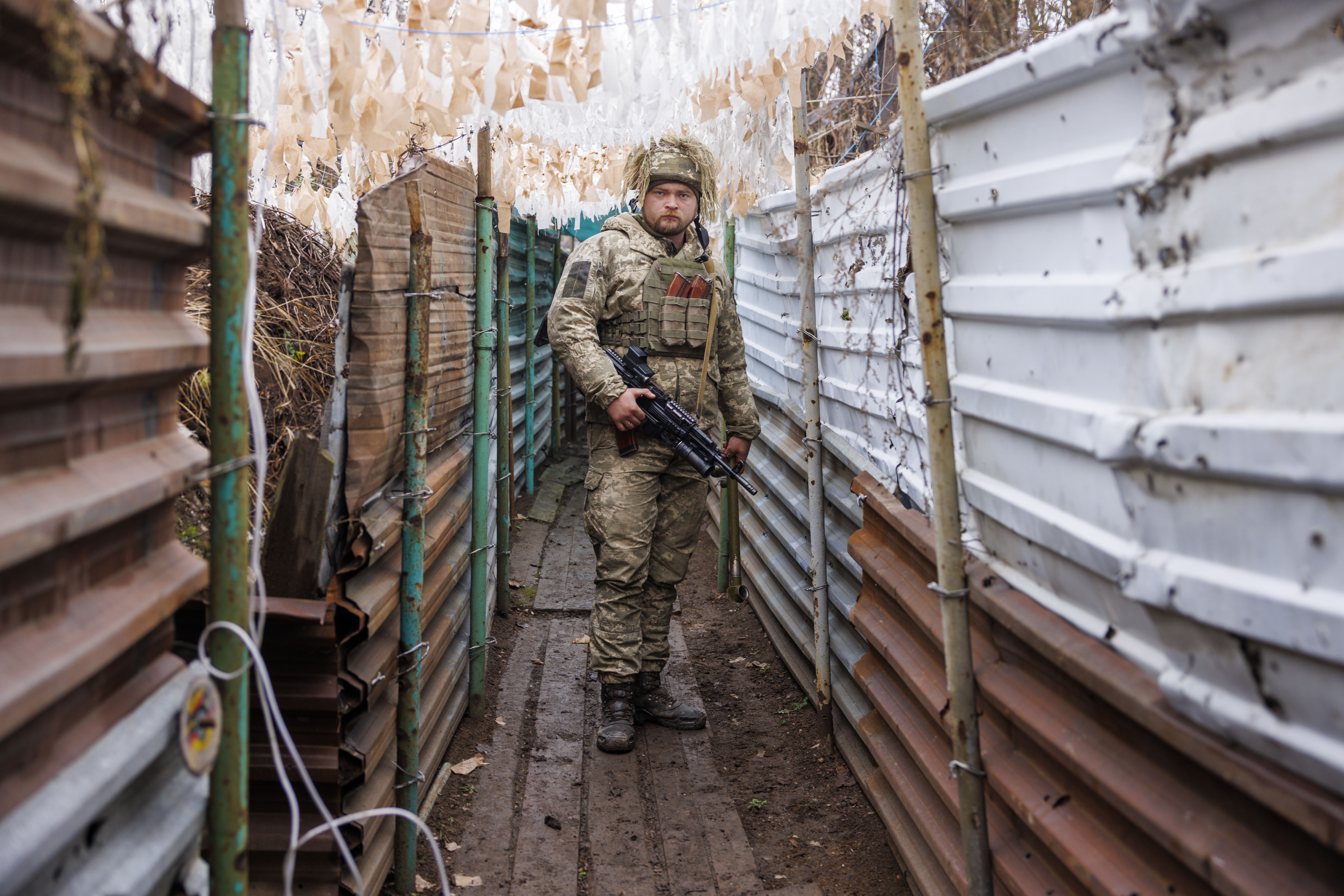 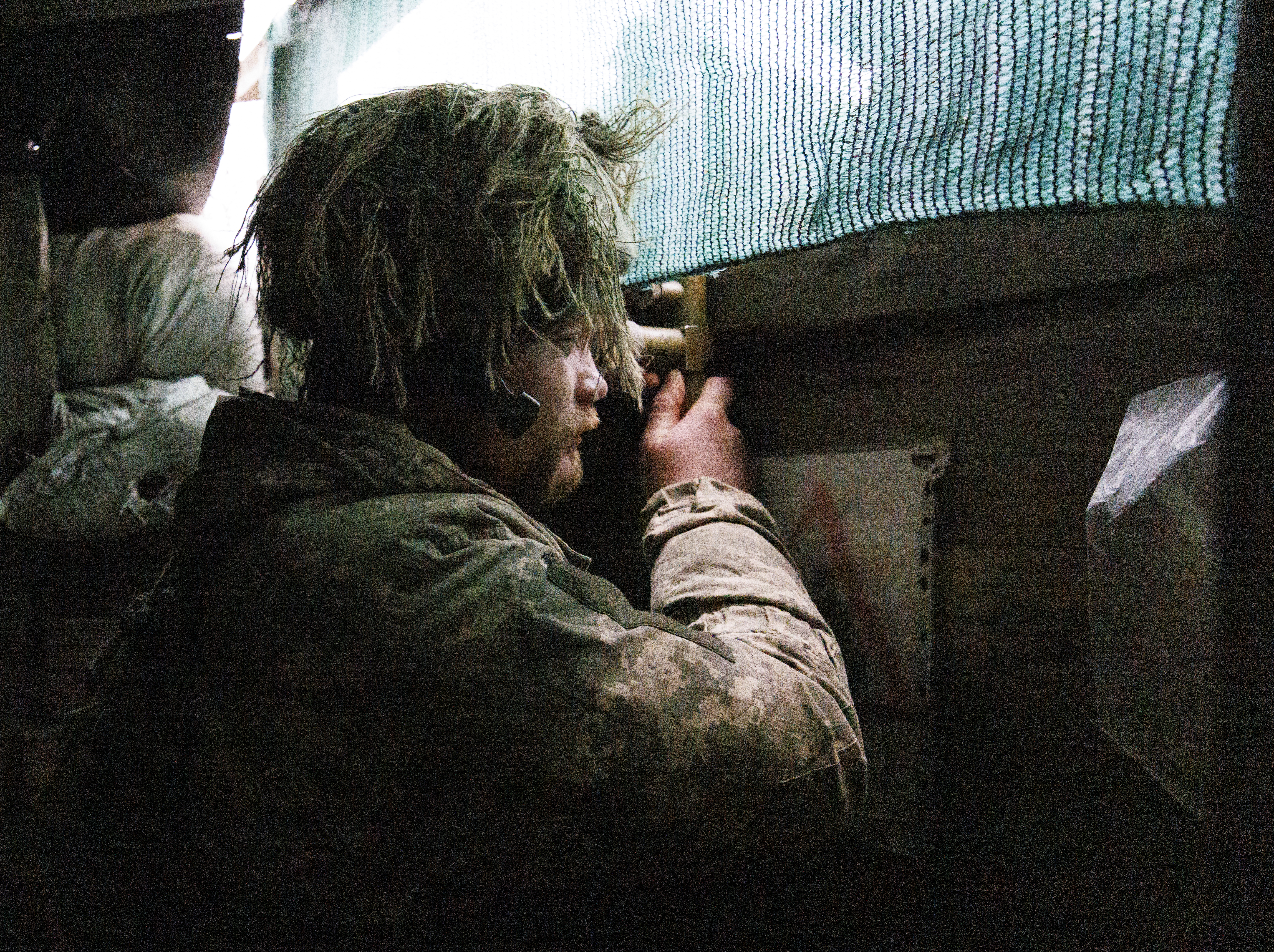 Afghan women claim to be ‘controlled’ by West in videos