Instagram bombards women and girls who suffer from eating disorders with images and videos of exceedingly thin females and others afflicted with anorexia, according to research done by the app’s parent company Facebook.

Internal documents leaked to the New York Post revealed that Instagram’s algorithm curates options based on searches and preferences of users who express interest in dieting, weight loss, and thinness.

Instagram researchers this year conducted an experiment in which they typed in terms like #skinny and #thin are then offered to browse through other accounts that feature dangerously emaciated women and girls.

Experts in eating disorders say that it is unhealthy for young girls and women who suffer from anorexia and bulimia to be exposed to images of those with similar afflictions since it would reinforce body-related insecurities.

Teens are especially vulnerable to what’s known as ‘thinspo’ – which is short for ‘thinspiration.’

Instagram bombards women and girls who suffer from eating disorders with images and videos of exceedingly thin females and others afflicted with anorexia, according to research done by the app’s parent company Facebook 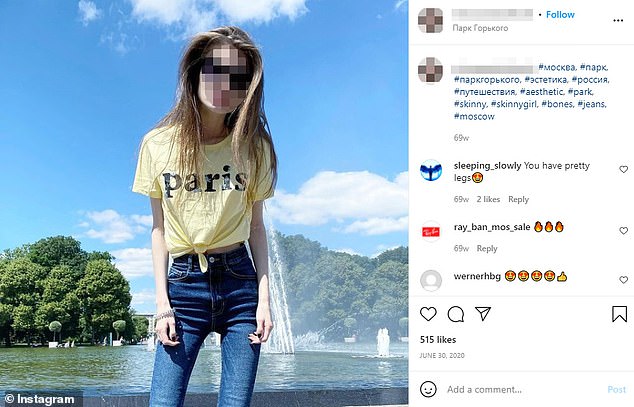 Instagram researchers this year conducted an experiment in which they typed in terms like #skinny and #thin are then offered to browse through other accounts that feature dangerously emaciated women and girls. Some of the account names include ‘_skinandbones_’, ‘applecoreanorexic,’ and ‘skinny._.binge.’

In an apparent attempt to crack down on the proliferation of images that could exacerbate eating disorders, Instagram has attached disclaimers and warnings of potential content that could be deemed problematic 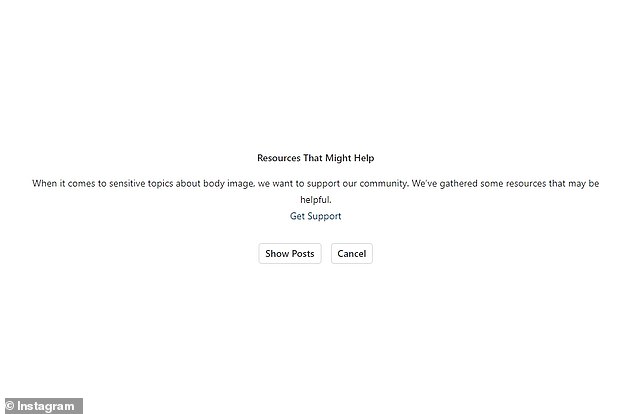 In online lingo, ‘thinspiration’ is a combination of the words ‘thin’ and ‘inspiration.’

The idea behind ‘thinspo’ is to motivate young girls and women to lose even more weight or to stay thin.

‘Even people with anorexia nervosa can identify that a person is too thin – but there still can be some element of that image that’s appealing to them,’ said Dr. Andrea D. Vazzana, a psychologist at New York University’s Langone Health system who has worked with eating disorder patients.

Vazzana said that 99 percent of her patients reported that their conditions were in some way affected by prolonged exposure to social media platforms like Instagram and TikTok.

She said those with eating disorders are especially susceptible to images of models. One who suffers from anorexia might see a model’s cheekbones and seek to lose even more weight in order to mimic the body type.

In an apparent attempt to crack down on the proliferation of images that could exacerbate eating disorders, Instagram has attached disclaimers and warnings of potential content that could be deemed problematic.

Last month, a company whistleblower leaked documents to The Wall Street Journal which showed that Facebook executives were aware of the potential harm that prolonged exposure to Instagram was causing young girls. 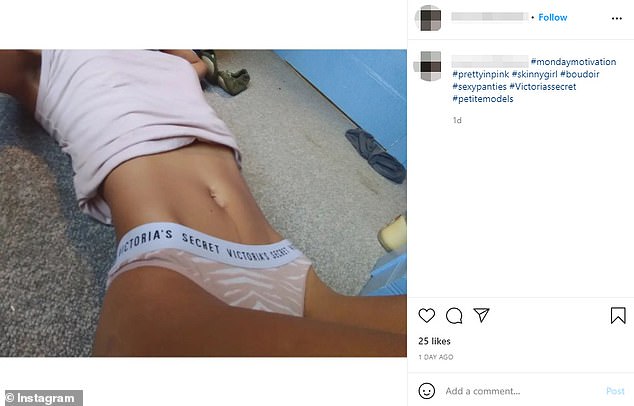 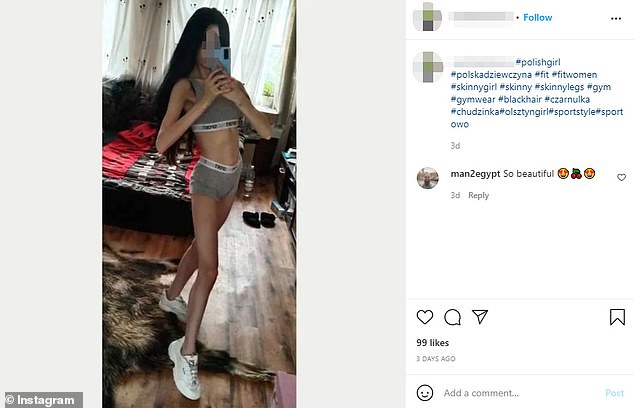 The image above shows a young girl whose post includes the hashtags #skinnygirl, #skinny, #skinnylegs, and #fitwomen 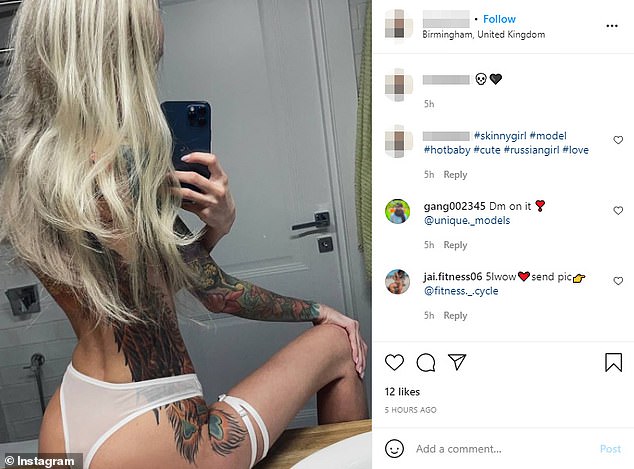 Earlier this month, the whistleblower who turned out to be the source of the documents obtained by the Journal testified before Congress.

Frances Haugen, a data scientist who says she left the company in disgust, accused her former bosses of putting profits over safety.

She accused the company of failing to make changes to Instagram after internal research showed apparent harm to some teens and being dishonest in its public fight against hate and misinformation.

Haugen’s accusations were buttressed by tens of thousands of pages of internal research documents she secretly copied before leaving her job in the company’s civic integrity unit.

But she also offered thoughtful ideas about how Facebook’s social media platforms could be made safer.

Haugen laid responsibility for the company’s profits-over-safety strategy right at the top, with CEO Mark Zuckerberg, but she also expressed empathy for Facebook’s dilemma.

Haugen, who says she joined the company in 2019 because ‘Facebook has the potential to bring out the best in us,’ said she didn’t leak internal documents to a newspaper and then come before Congress in order to destroy the company or call for its breakup, as many consumer advocates and lawmakers of both parties have called for. 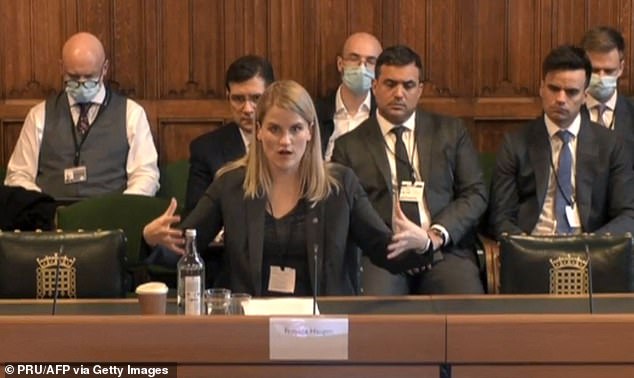 Haugen is a 37-year-old data expert from Iowa with a degree in computer engineering and a master’s degree in business from Harvard.

Prior to being recruited by Facebook, she worked for 15 years at tech companies including Google, Pinterest and Yelp.

Question of the things you’ve felt in the last month, did any of them start on Instagram? Select all that apply

Down, sad or depressed

Wanted to kill themselves

Wanted to hurt themselves

Question: In general, how has Instagram affected the way you feel about yourself, your mental health?

‘The company’s leadership knows how to make Facebook and Instagram safer but won’t make the necessary changes because they have put their astronomical profits before people.’

‘Congressional action is needed,’ she said. ‘They won’t solve this crisis without your help.’

In a note to Facebook employees, Zuckerberg disputed Haugen’s portrayal of the company as one that puts profit over the well-being of its users, or that pushes divisive content.

‘At the most basic level, I think most of us just don’t recognize the false picture of the company that is being painted,’ Zuckerberg wrote.

He did, however, appear to agree with Haugen on the need for updated internet regulations, saying that would relieve private companies from having to make decisions on social issues on their own.

‘We’re committed to doing the best work we can, but at some level the right body to assess tradeoffs between social equities is our democratically elected Congress,’ Zuckerberg wrote. 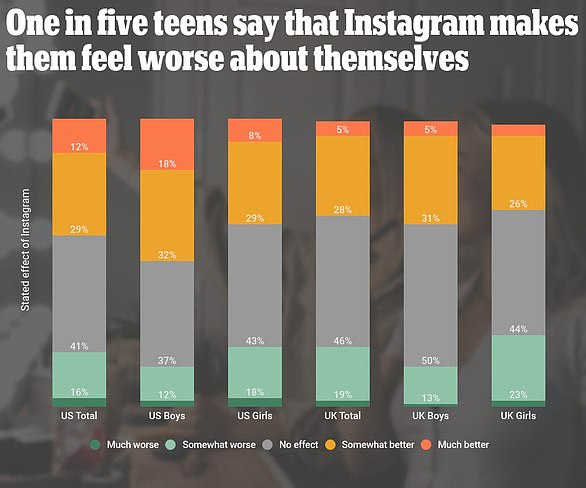 According to the documents given to The Wall Street Journal, Facebook had known for two years now that Instagram is toxic for young girls but continued to add beauty-editing filters to the app, despite six per cent of suicidal girls in America blaming it for their desire to kill themselves

Facebook last month pushed back against claims that it has long known that its subsidiary Instagram was harmful to teenage girls’ mental health – arguing instead that the app actually makes most of them feel better about themselves.

The Wall Street Journal, citing a review of internal company documents that included research reports, online employee discussions and drafts of presentations to senior management, said that although Facebook researchers have identified ‘the platform’s ill effects,’ the company failed to fix them.

The most damaging and widely reported claim centered on a statistic showing Instagram made a third of teenage girls surveyed feel worse about their body image.

‘It is simply not accurate that this research demonstrates Instagram is “toxic” for teen girls,’ Raychoudhury writes.

‘The research actually demonstrated that many teens we heard from feel that using Instagram helps them when they are struggling with the kinds of hard moments and issues teenagers have always faced.’

Raychoudhury writes that the Journal did not note in its story that while girls did struggle with body image after exposure to Instagram, they said they felt better in other areas, like loneliness, anxiety, sadness, and eating issues.

‘Body image was the only area where teen girls who reported struggling with the issue said Instagram made it worse as compared to the other 11 areas,’ Raychoudhury writes.

‘But here also, the majority of teenage girls who experienced body image issues still reported Instagram either made it better or had no impact.’

Raychoudhury claims that the Journal ‘implied that we were hiding this research and that the results are surprising, but that is simply not accurate.’

Facebook claims that the newspaper failed to ‘put specific findings in context’ and that the research cited ‘did not measure causal relationships between Instagram and real-world issues.’

It also cited the number of teens surveyed for some of its findings, claiming that just 40 youngsters provided answers to some questions, meaning it was impossible to report their concerns as a definitive criticism of the social media site.

Raychoudhury cites other studies from Harvard and Pew which show that young people have an overall positive view of social media. 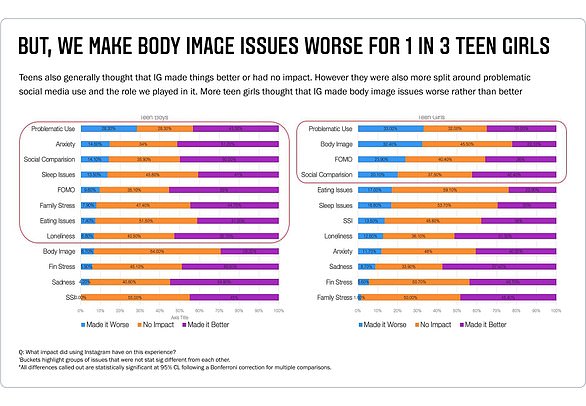 The company published a blog post last month arguing that teenage girls who use Instagram actually end up feeling better about themselves. As evidence, it cited the above chart

A Pew Internet survey found that 81 percent said social media helps them connect with one another, though 43 percent said they felt pressure to post things that make them ‘look good.’

Raychoudhury writes that Facebook has used the internal research cited by the Journal to ‘inform changes to our apps and provide resources for the people who use them.’

Among the changes that the company has introduced include ‘new resources to support those struggling with body image issues’ as well as removing ‘all graphic content related to suicide.’

Raychoudhury also touts a new feature which ‘allows people to protect themselves from bullying.’

Just 9 percent said the app made them feel worse, according to Facebook.

Facebook also took issue with the Journal’s claim that 13 percent of British users and 6 percent of Americans ‘traced the desire to kill themselves to Instagram,’ citing an internal company presentation.

‘When we take a step back and look at the full data set, about 1 percent of the entire group of teens who took the survey said they had suicidal thoughts that they felt started on Instagram,’ according to Raychoudhury.

‘In addition, some of the same research cited by the Journal in the slide above shows that 38 percent of teenage girls who said they struggled with suicidal thoughts and self harm said Instagram made these issues better for them, and 49 percent said it has no impact.’

The Journal articles say that Facebook exempted high-profile users from some or all of its rules, played down the negative effects on young users of its Instagram app, made changes to its algorithm that made the platform ‘angrier,’ and had a weak response to alarms raised by employees over how the platform is used in developing countries by human traffickers.

The company disagrees, claiming that teens using Instagram in the US and UK are roughly three times more likely to say that Instagram makes them feel better about their life rather than worse about it.

The social network posted a rebuttal to The Wall Street Journal’s investigation which cited internal company documents stating that its engineers knew Instagram was having adverse effects on teens’ body image.