On Monday, a Russian Soyuz rocket with three astronauts aboard will depart for the International Space Station in one of the most high-stakes launches in years. If the rocket does not reach the ISS as planned, the station is likely to be left temporarily abandoned by the end of the year.

Monday’s flight will be the first time a manned Soyuz rocket attempts to launch into space since one failed in mid-air in October, forcing a Russian cosmonaut and an American astronaut to eject roughly 30 miles above the earth’s surface around 2 minutes after takeoff.

The October launch was the first failure during a manned Soyuz flight in more than 30 years, and prompted Russia to suspend all its crewed flights, temporarily cutting off the only route to the space station.

Monday’s launch from Russia’s Baikonur spaceport in Kazakhstan will attempt to restart flights to the space station, about a month after the Russian space agency, Roscomos, identified the fault that caused the accident. Investigators found that a sensor in the rocket had been damaged during its assembly at Baikonur, causing it to separate incorrectly and crash into a booster engine.

With the cause identified, the next Soyuz flight was moved up by two weeks to Nov. 3. Onboard will be American astronaut Anne McClain, the Canadian Space Agency’s David Saint-Jacques and Russian Oleg Kononenko.

The accelerated itinerary reflects this flight’s unusual stakes. An unsuccessful launch would obviously be a danger to rocket’s crew, but it would also pose a threat to the ISS itself, which would almost certainly be left empty for the first time in its 18-year history.

“If this Soyuz, for whatever reason, does not make it to orbit, the crew will have to come down by the end of the year,” Shannon Walker, a NASA astronaut, told ABC News on Sunday.

Three astronauts are currently aboard the ISS: Russian Sergey Prokopyev, Alexander Gerst of the European Space Agency and Serena Aunon-Chancellor of NASA. Since the space shuttle’s retirement in 2011, Russia’s Soyuz rockets have been the only method used to ferry astronauts to the ISS, and there is no other way to relieve them.

The current ISS crew has enough supplies to last for several months. But the problem is that the Soyuz capsule that brought the astronauts up in June and serves as their emergency life-boat to return to Earth can only spend a limited time in space. The Soyuz, which NASA estimates can spend 200 days in orbit, is fast approaching that limit, after which the crew must evacuate.

Walker said the deadline could theoretically be pushed by 10 days. However, if Monday’s mission fails, the ISS crew would probably have to return shortly after Christmas.

The Soyuz is considered one of the most reliable space rockets in history, and a malfunction during Monday’s flight is considered extremely unlikely. The last manned Soyuz failure was in 1983. 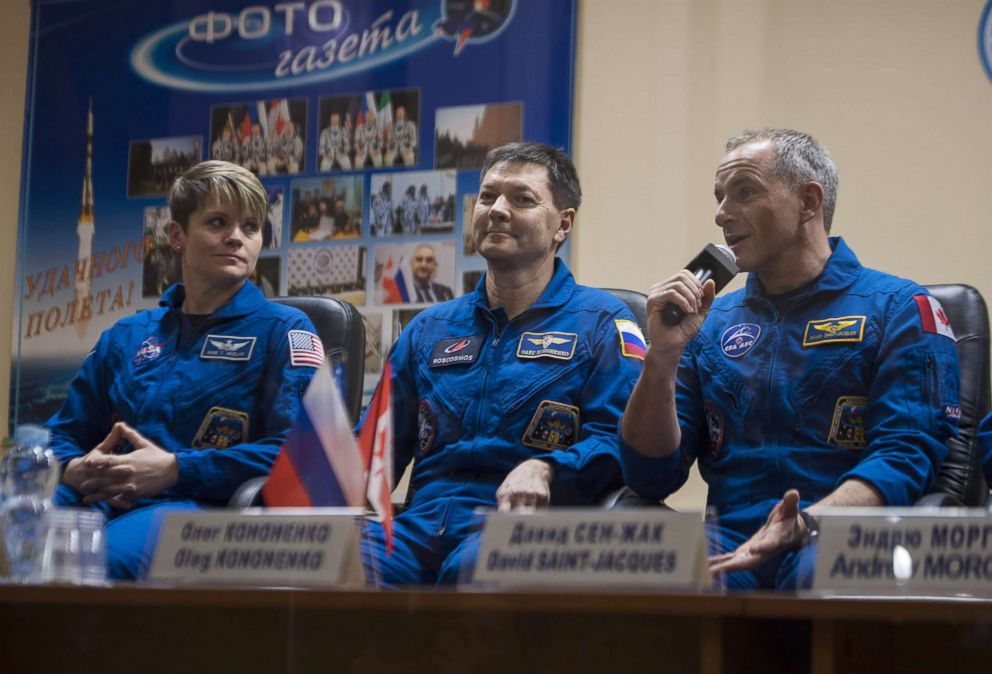 But NASA has been making contingency plans since October’s accident. Engineers have been hurrying to figure out how to put the ISS into stasis, NASA representatives said.

“It is serious,” said Walker, who spent 163 days aboard the ISS in 2010. “But NASA being NASA, we do a lot of planning, a lot of what-ifs, and so we’ve had a team working ever since the last aborted mission to plan for such a situation,” Walker said. She added that the station is capable of operating unmanned for long periods, with many systems able to operate automatically or by control from the ground.

NASA has expressed full confidence in Roscomos’ investigation and ability to get the astronauts to the station, amid criticism that the crash underlines broader dysfunction in Russia’s space program.

McClain and her crewmates at a pre-flight press conference said they were not concerned.

“Risk is part of our jobs,” said McClain, who was sitting with the other astronauts behind glass to protect them against infection. She noted multiple unmanned launches had happened since the problematic October launch, and that independent agencies had thoroughly evaluated the accident before this mission was greenlit.

Canadian astronaut Saint-Jacques, who watched October’s botched launch as back-up crewmember in Baikonur, told reporters that in some ways it had reassured him, demonstrating the Soyuz’s remarkable safety mechanisms. “Even in such dire circumstances,” he said, “still they came back.”

A delay on Monday could also impact NASA’s long-term efforts to restart its own manned space program from the U.S. Elon Musk’s SpaceX and Boeing are developing rockets for NASA, and are due to begin testing them in 2019. In January, Space X is scheduled to make its first test flight with its Falcon 9 rocket carrying an empty spacecraft to the ISS.

McClain and the other astronauts are due to receive that craft, which would be the first commercially-crewed flight. But should the station be abandoned, it’s unclear if that test could go ahead. There are separate doubts the Space X flight will take off as scheduled.

Monday’s launch is scheduled for 6:31 a.m. Eastern Standard Time. The flight to the ISS normally takes around 6 hours.

Saint-Jacques told reporters he had begun to fantasize what it would be like in space. McClain said they had already put October’s accident out of mind.

“We are ready to go,” McClain said. “We’re not thinking about that.”

Staten Island beauty queen comes out as bisexual ahead of St. Patrick’s Parade