Few would dispute that the decision to re-open Australia’s borders to (fully vaccinated) international visitors on February 21, just shy of two years since they closed, is encouraging news. 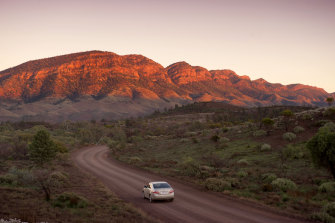 Our tourism industry is hoping border openings will revive its prospects.

Not only is it a milestone in our emergence from the pandemic, it ends months of uncertainty for families with loved ones overseas and, crucially, will revive our $60 billion tourism industry, all but flattened by closures, lockdowns and, most recently, fears about the Omicron variant.

As Patrick Hatch reports, even domestic tourism numbers fell nationally by around a quarter in the 10 months to October 2021. Those more reliant on international custom have seen their livelihoods shattered.

Before the pandemic, tourism directly employed 666,000 people, according to federal government figures, making up close to 5 per cent of the workforce. As of September last year, the number employed in the industry had fallen by around 20 per cent, or more than 100,000 jobs, according to the Tourism and Transport Forum, an industry lobby group.

There are few easy fixes for the challenges they now face.

Foremost among them is a severe labour shortage that is likely to remain an issue until overseas students and young travellers return to fill the gaps.

The hospitality sector has already endured the trial by fire of rebooting dormant businesses without enough workers, or with inexperienced staff, and it is not encouraging. Will we be offering a world-class experience to overseas visitors, or do we risk damaging Australia’s “brand”?

From the visitors’ perspective, there will likely be continuing confusion around vaccination and quarantine requirements that could be deal-breakers.

The current requirement, according to Scott Morrison’s announcement, is for a full course of a vaccine. But is that two doses or three? The Victorian government has suggested it may require arrivals to have had two doses and a booster.

Unless the messaging is absolutely consistent – and unfortunately, given our history of COVID messaging in this country, we have little confidence it will be – prospective tourists may well nurture a nagging doubt that they could be turned away on arrival, or worse – be kept hostage, as was Novak Djokovic.

Prospective tourists then have to navigate our disparate federation. Australians may be painstakingly up to date on each state’s quarantine requirements, but visitors planning a holiday here are unlikely to dwell on that level of detail – do they even know we have states? – or will be spooked to discover that while they can fly into Sydney without issue, on their way to WA’s Cable Beach they’ll need to spend seven days in self-quarantine.

The sooner these disparities are resolved, so we can present a united and uncomplicated front to the rest of the world, the better.

Meanwhile, cruise ships are still banned and we are unlikely to see Chinese nationals return in serious numbers. Even ignoring geopolitical tensions, until China drops its mandated 14 days quarantine for inbound travellers we will have to learn to live without what was once 15 per cent of our market.

Facing these hurdles, and no doubt others too, our tourism industry should rightly expect more support from the government while it staggers back to its feet: small business loans, Jobkeeper-style payments, assistance with promotion and the like would not be unreasonable.

Nor is the suggestion by John O’Sullivan, former managing director of Tourism Australia, that the organisation’s funding should be increased, from around $200 million annually to up to $300 million to drive a post-COVID revival.

For, after what the industry has endured, it will not be enough to simply throw open the doors and declare Australia open for business.

These mothers called 911 to seek help for their struggling sons. Their children ended up dead.