Piped into his suit, is Wayne Rooney wondering how he got into this mad, Wag farce? JANE FRYER is on Wagatha Watch as she observes Day 2 of sensational trial

Rebekah Vardy once, rather brilliantly, compared quarrelling with Coleen, Queen of Wags, to ‘arguing with a pigeon’.

‘You can tell it that you are right and it is wrong, but it’s still going to s*** in your hair,’ is how she put it.

So maybe, just maybe, she should have heeded her own wise words before issuing her libel action against Coleen Rooney and hurling herself into the multi-million Wagtastic ding-dong currently unfolding at the Royal Courts of Justice.

Because with the blizzard of her own WhatsApp messages and a cross-examination so vigorous it nearly wrecks her sturdy blusher, at times it’s hard to remember Rebekah is the claimant, not defendant. 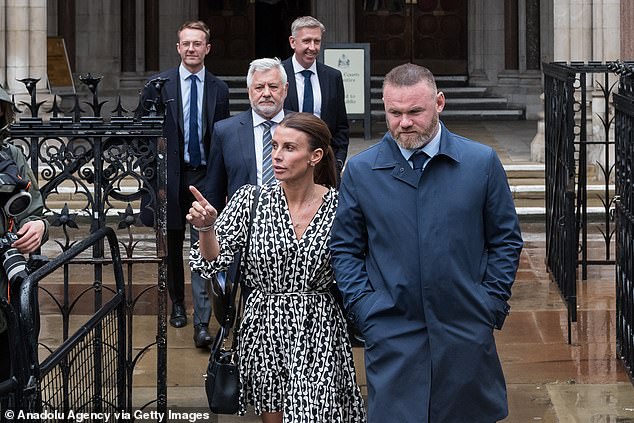 Rebeka Vardy arrives at the Royal Courts of Justice Coleen Rooney vs Rebekah Vardy trial. She is accused of betraying her friends and her husband’s teammates yesterday as she was grilled over WhatsApp messages in the ‘Wagatha Christie’ libel battle

That it is she – supposedly the wronged party – who is here to clear her name and salvage her reputation.

Which, to be fair, after five hours on the stand, feels increasingly frazzled and frayed.

Certainly, the Right Honourable Mrs Justice Steyn – more accustomed to hearing cases about Guantanamo Bay prisoners, Saudi arms deals and allegations that the Home Secretary is a bully – would be forgiven if she felt she’d hit peak Wag.

She’s already learned more than she could ever have wished about the meaning of emojis, the proportions of certain intimate anatomies, who was or was not called a **** by Vardy, the art of selling stories to The Sun and the ins and outs of life as a relentlessly self-promoting footballer’s wife.

In jam-packed Court 13, however, there’s no respite as Rebekah – in a black Dynasty-style £1,245 Alexander McQueen power jacket that looks suspiciously like the one Coleen wore a day earlier – continues to give evidence.

Six feet away, Coleen – in a £32.99 Zara dress paired with a single £2,000 Chanel loafer and aircast boot – gives her daggers and scrawls furiously on an A5 pad. Oh yes, and somehow doesn’t blow her top as the court hears messages in which she is referred to as a d*** and a ****.

Beside her, Wayne looks like a suicidal bouncer. In clothes so tight he could have been piped into them, he glares miserably at the floor, perhaps wondering how, as England’s top goal scorer, he ended up the chubby pink pig in the middle of this mad, Wag farce. 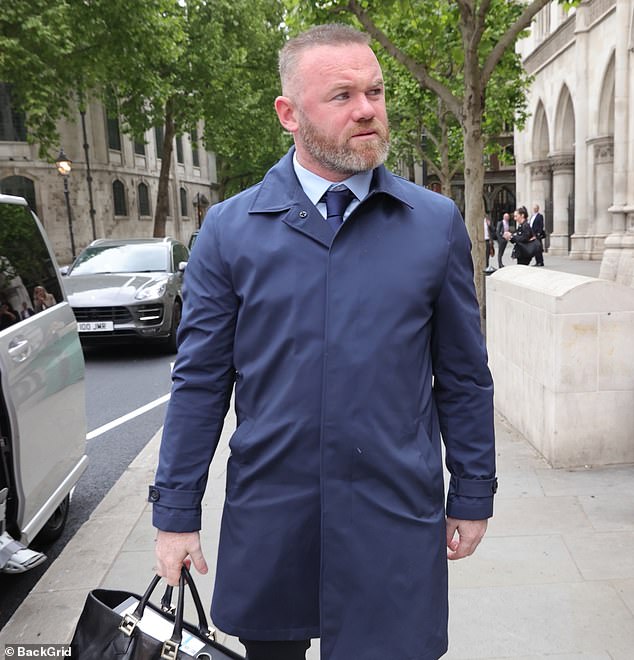 Coleen and Wayne Rooney arrive at the High Court Picture. The £3million libel trial heard extraordinary details of life inside the Wags’ bubble, including lurid claims of extramarital affairs, bitter rivalries and back-stabbing

On and on it goes, with Vardy denying selling stories about footballer Riyad Mahrez, model Danielle Lloyd’s miscarriage, the extramarital affair of an unnamed high-profile celebrity, lying on oath about all of the above and sobbing at the horror of the trolls who threatened her family.

By mid-afternoon, no amount of clever contouring can conceal how knackered everyone is. Clearly, they had a bad night.

And we can all imagine the pillow talk chez Rooney Towers (worth £20million).

‘What were you thinking, Coleen – all our dirty laundry in public?’

Meanwhile, as Vardy weeps, Coleen scowls and poor old Wayne wishes he was safely down the pub, social media is awash with everything Wagatha and the nation has split into Team Vardy and Team Rooney.

Remember, this is only Day Two of the Great British Wag Off. There are five more to go! For now, though, one thing’s certain – there’s an awful lot of pigeon s*** in Vardy’s hair. But tomorrow’s another day – possibly even with Coleen on the stand.

So before we jump to conclusions, let’s see what it brings for her beautifully balayaged locks.

By Vanessa Allen and Alice Wright

Rebekah Vardy was accused of betraying her friends and her husband’s teammates yesterday as she was grilled over WhatsApp messages in the ‘Wagatha Christie’ libel trial.

In five hours of gruelling cross-examination, which at one point left her in tears, Mrs Vardy denied she encouraged her agent to ‘stalk’ Coleen Rooney’s private Instagram and leak stories about her and other Wags.

Mrs Vardy, 40, was confronted with messages in which she discussed leaking and selling stories, and faced repeated accusations that she was lying to the court to protect the ‘last shred’ of her case against Mrs Rooney.

She rejected accusations she had revealed ‘juicy information’ to settle scores with rival Wags, while courting positive publicity by arranging staged photographs and interviews to promote her image.

Mrs Vardy, a mother-of-five, broke down in tears as she was confronted with one such interview, in which she told how vile online trolls had threatened to rape her daughter. 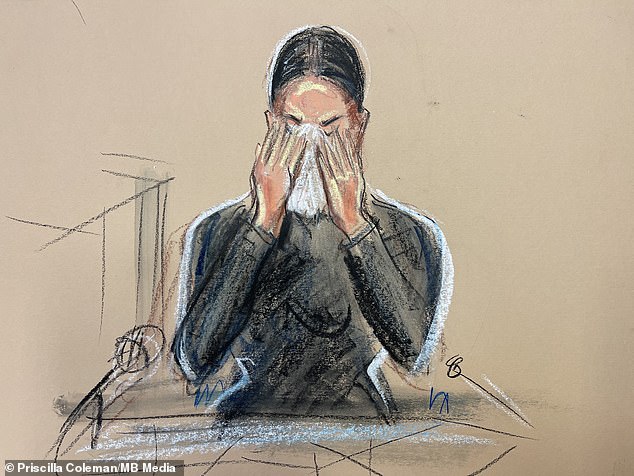 A court drawing shows Rebekah Vardy crying in the witness box. Mrs Vardy, a mother-of-five, broke down in tears as she was confronted with one such interview, in which she told how vile online trolls had threatened to rape her daughter

The £3million libel trial heard extraordinary details of life inside the Wags’ bubble, including lurid claims of extramarital affairs, bitter rivalries and back-stabbing.

The case centres around a 2019 social media post by Mrs Rooney in which she said she had planted fake stories on her private Instagram account and accused Mrs Vardy of leaking them to The Sun newspaper.

Mrs Vardy denied the claim, and launched a libel case when Mrs Rooney refused to take down the post.

Mrs Vardy, who is married to Leicester City star Jamie, admitted she had been willing to leak a story about his teammate Danny Drinkwater’s arrest for drink-driving.

The court heard a series of WhatsApp exchanges between her and her agent Caroline Watt, in which Mrs Vardy said: ‘Story… Danny Drinkwater arrested… crashed his car drunk with [two] girls in it… I want paying for this.’

Mrs Watt said she had contacted The Sun but the newspaper already knew about the arrest, and Mrs Vardy replied: ‘Holy f***… I am fuming that I didn’t give this to you earlier.’ Mrs Watt said: ‘Me too, that would have been a fortune.’

Asked yesterday if she had wanted payment for leaking the information to The Sun, Mrs Vardy said it was a ‘fleeting thought’ and denied it was part of a regular pattern in which she instructed Mrs Watt to leak stories for payment.

Lawyer David Sherborne, for Mrs Rooney, said: ‘Despite him being one of your circle, you were prepared to pass on private information about him?’ Mrs Vardy replied: ‘Yes, on that occasion, because of his behaviour.’

Mrs Rooney, who wore a £32.99 patterned Zara dress and Chanel shoes, watched intently as Mrs Vardy gave her evidence, and scribbled notes in a pad. Mrs Vardy opted for a £1,847 Prada black dress, a £1,245 McQueen jacket and a £1,650 Givenchy handbag.

She was asked about her messages with Mrs Watt about an Instagram story involving damage to Mrs Rooney’s car.

Mrs Watt messaged her on WhatsApp, asking if Mrs Rooney had crashed her Honda. Mrs Vardy replied: ‘She defo has… Go in the Instagram.’

Mrs Watt messaged again, saying: ‘I would have tried to have done a story on Coleen but the evidence has been deleted.’

Mr Sherborne said Mrs Vardy and her agent maintained a ‘constant commentary’ about posts by Mrs Rooney, and claimed they were monitoring her Instagram for nuggets of information to leak.

The Sun later ran an article about Mrs Rooney’s car, and she blocked Mrs Vardy on her Instagram, suspicious someone was leaking information about her.

WhatsApp messages showed Mrs Vardy questioning why Mrs Rooney had blocked her, saying: ‘She thinks it’s me that’s been doing stories on her!… That **** needs to get over herself.’

Mrs Vardy denied she had leaked information about Mrs Rooney, or instructed Mrs Watt to do so.

But she was asked about a series of WhatsApp exchanges with Mrs Watt in which they did appear to discuss leaking information. 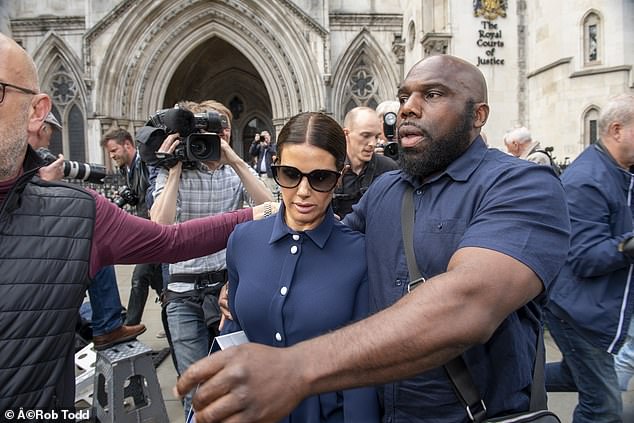 ‘JUST DON’T WANT IT COMING BACK ON ME’

Mr Sherborne said she had wanted to ‘do the dirty’ on her husband’s Leicester City team-mate Riyad Mahrez when he was refusing to train with the club. She contacted Mrs Watt, and the agent suggested she should tell a Sky Sports journalist.

Mrs Vardy replied: ‘Just don’t want it coming back on me.’ Mrs Watt then offered to contact the journalist. Mrs Vardy denied that she or Mrs Watt were behind any stories about Mr Mahrez.

She messaged Mrs Watt in 2018 saying: ‘OMG, have you seen how badly Mrs F is behaving.

I am absolutely disgusted by her. Leak the story about her s****ing G behind [her husband’s] back.’ Mrs Vardy told the court her words did not amount to an instruction to leak the story, but that she had been ‘joking’.

Mrs Vardy denied she had wanted to leak information about Danielle Lloyd, the former wife of ex-Tottenham player Jamie O’Hara, because the pair had a ‘spat on Instagram’.

Mrs Vardy said she was referring to an interview Miss Lloyd had given, in which she discussed going on honeymoon to the Maldives, and later suffering a miscarriage. She insisted she was not ‘privy to any information’ about Ms Lloyd.

‘DON’T GIVE HIM THE MR X STUFF’

The court heard that Mrs Watt asked Mrs Vardy why she had been blocked on Instagram, and if she thought Mrs Rooney suspected she was the source of stories.

Mrs Vardy replied: ‘Just don’t know how she would ever know that unless [Sun journalist Andy] Halls has leaked it in which case please don’t give him the Mr X stuff.’

Mrs Watt said: ‘I messaged him [Halls] and he said absolutely not and he would never say what his source was.’

The court heard Mr X was a married footballer who had fathered a child with another woman.

Mrs Vardy denied that she had instructed Mrs Watt to withhold information ‘until you’re sure that Mr Halls hasn’t grassed you up’, saying: ‘That’s my way of communicating with her not to give journalists information.’

She denied she had habitually given information to her agent to pass on to The Sun.

Thousands with prostate cancer will be denied life-extending drug