NEAR BAGHOUZ, Syria (Reuters) – Islamic State looked close to defeat in its last enclave in eastern Syria on Wednesday as civilians poured out and the U.S.-backed Syrian Democratic Forces (SDF) said the remaining jihadists wanted to fight to the death. 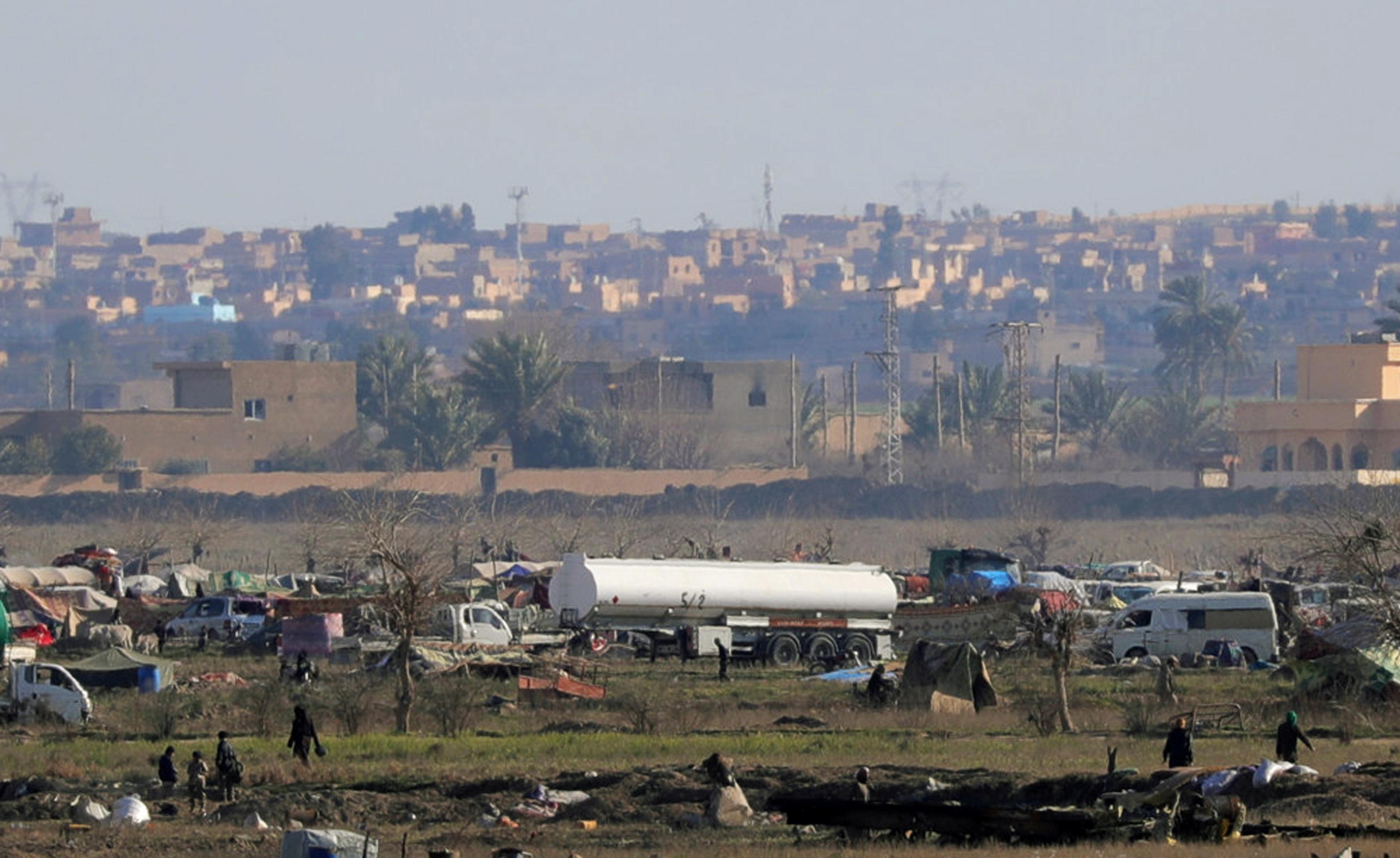 More than 2,000 civilians left the village of Baghouz in a convoy of dozens of trucks. Coalition warplanes could be seen overhead and the sounds of intermittent gunbattles could be heard from the area, which is completely surrounded by the SDF.

“The terrorists are entrenched inside, still betting on ending it militarily,” said Mustafa Bali, head of the SDF media office. “Our forces said from the start that they have two options: unconditional surrender or for the battle to continue until its end.”

The U.S.-led coalition said “the most hardened ISIS fighters remain in Baghouz”.

The village at the Iraqi border is the last scrap of ground left to Islamic State in the Euphrates valley region that became its final major stronghold in Iraq and Syria after a series of catastrophic defeats in 2017.

Taking it will nudge the eight-year-old Syrian war towards a new phase, with U.S. President Donald Trump having pledged to withdraw American troops, leaving a security vacuum that other powers would seek to fill.

The SDF could not be certain if some Islamic State fighters had left Baghouz with the civilians, Bali said, adding security forces were checking the identities of everyone leaving.

The SDF was working to evacuate some remaining civilians in Baghouz, he said. “We can’t storm Baghouz before confirming all civilians have been evacuated.”

SDF fighters, with troops of the U.S.-led coalition against IS, waited at a position on Baghouz’s outskirts to question the evacuees and record their names, a Reuters witness said.

Its fall marks a big moment in the group’s trajectory, from winning control over vast territories in 2014 and proclaiming the creation of a caliphate to rule over Muslims, to its stubborn demise under concerted military assault.

Few believe the capture of Baghouz will end Islamic State’s threat: some fighters still hold out in the central Syrian desert and it has managed to stage repeated guerrilla attacks in areas where its territorial rule was ended.

However, it will heighten attention on the promised withdrawal of some 2,000 U.S. troops who have deployed into Syria during the fight against IS, and with it the fate of the Kurdish-led region that the U.S. presence has helped to secure.

Trump on Saturday tweeted: “We are pulling back after 100% Caliphate victory.”

FATE OF KURDISH-HELD ZONE IN THE BALANCE

Turkey has repeatedly threatened an incursion because it sees the Kurdish YPG militia, which spearheads the SDF, as a terrorist group inseparable from the PKK which has waged a three-decade insurgency inside its own borders.

Facing this prospect, the YPG in December invited the Syrian government of President Bashar al-Assad to take over the westernmost part of its territory, around the city of Manbij, and seeks broader negotiations with him over the area it holds.

The SDF on Monday called for 1,000-1,500 international forces to remain in Syria to ensure that Islamic State’s territorial defeat is lasting. The head of U.S. army Central Command, General Joseph Votel, said he was still carrying out Trump’s withdrawal order.

Among the many civilians who have left Baghouz in recent days are families of Islamic State fighters, including some foreigners who went to Iraq and Syria to join its caliphate.

The SDF has complained that Western countries are reluctant to take back such people, who are seen at home as a security threat but might be hard to legally prosecute.

On Wednesday, Britain stripped citizenship from one of them, 19-year Shamima Begum, who ran away to join Islamic State as a schoolgirl in 2015.

Both the SDF and U.S. officials have said the presence of civilians in Islamic State’s last pocket at Baghouz, targeted by air strikes again on Tuesday night, has slowed their advance.

During years of steady retreats, Islamic State has honed its tactics of street fighting – sheltering among civilians, digging tunnels and laying innumerable mines and booby traps.

Reuters photographs have shown one part of the remaining Islamic State pocket, where fighters and civilians were gathered among scattered tents and vehicles on the edge of a village.

Many civilians who have previously escaped the group’s rule, including some of the thousands of Yazidis in Iraq kidnapped and forced into sexual slavery, still suffer trauma long afterwards.