A cold blast of polar air sweeping across south-east Australia is expected to bring icy temperatures and heavy rains to parts of NSW and Victoria next week, as well as a possible rare dusting of snow in southern Queensland.

The large mass of frigid air swirling around the Southern Ocean near Antarctica will push north into Western Australia and South Australia on Monday afternoon before moving east to Victoria, western Tasmania and NSW. 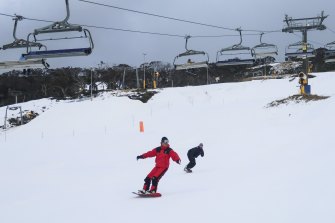 A polar blast will see more snow dumped on the Australian alps. Perisher opened a week early on Friday.Credit:Alex Ellinghausen

“We have a strong cold front crossing south-eastern Australia on Monday and Tuesday which will bring a polar air mass,” Weatherzone meteorologist Esteban Abellan said.

“There’s usually cold air circulating around Antarctica but this time one of the polar air masses is going to head into southern Australia.”

The chilly air is predicted to form a low-pressure system that will drive down temperatures and trigger gusty winds, heavy downpours and snow dumps on the Australian alps.

“The heaviest rainfall will be in eastern Victoria and south-east NSW on Wednesday and Thursday,” Mr Abellan said.

“This includes East Gippsland in Victoria, western Tasmania, the Snowy Mountains and the Illawarra and South Coast in NSW, south of Sydney. We could have [weekly] rainfall totals exceeding 100 millimetres by Friday.”

Between 10 and 20 millimetres of snow could fall on the NSW and Victorian alps. The cold weather prompted Perisher ski resort in NSW opened its Front Valley run on Friday, a week before the normal season launch date.

“It will be a good start to the snow season. We could also see snow in the Central Tablelands of NSW, a dusting of snow in the Blue Mountains, and the Northern Tablelands in NSW and southern Queensland,” Mr Abellan said.

“Snow in Queensland doesn’t happen very often – about once a year.”

Sydney is expected to miss much of the heaviest rainfall early in the week. The mercury is tipped to reach about 20 degrees on Monday and Tuesday, before dropping overnight, with an top of 15 degrees forecast on Wednesday.

“It’s going to be quite a change. And the wind chill will feel two to three degrees cooler. It’s going to feel very cold, with significant cloud cover, and we could see some showers.”

Mr Abellan said Wednesday and Thursday would be the coldest days, before the temperatures warmed up on Friday.

“By the end of the week Sydney could see tops of 19 or 20 degrees, just in time for the weekend.”

The icy blast is set to come after Sydney recorded its coldest day in five years on Thursday.

Temperatures in Melbourne are expected to reach a top of 18 degrees on Monday, before dropping to a maximum of 15 degrees on Tuesday and Wednesday.