For the 30 per cent of Australians who rely on Facebook as their primary source of news, they will have to find it elsewhere or live a fact-free life following the Big Tech behemoth’s decision on Thursday to purge journalism from its site.

Overnight, Facebook has removed access to its users from any site that smells like news: not only local major mastheads such as The Sydney Morning Herald and The Age, but also specialist sites like The Conversation and global leaders such as The New York Times. 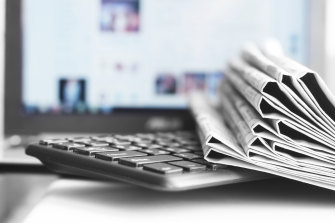 News blackout … Facebook is ignoring the public interest while acting in self-interest. Credit:iStock

It also seems Fire and Rescue NSW, the Bureau of Meteorology, MS Research Australia, Doctors without Borders and state health departments are among many placed on the blacklist, showing the scope of the Mark Zuckerberg edict from Silicon Valley.

This is an arrogant and reckless move that will be dangerous for all Australians who are relying on an evidence-based response to a global pandemic, but also self-destructive to Facebook. While Facebook argues it does not make much money from news in its network, it is wilfully turning a blind eye to its value. News provides the facts and evidence to anchor what it claims is a ubiquitous digital experience.

If there was ever any doubt about Facebook’s cavalier attitude to the network of users it has created, this news blackout is definitive. To Facebook, we are all merely pieces of data to be observed, exploited and monetised. As citizens we are worthless.

By rejecting the decisions of our elected representatives to implement the findings of the Australian Competition and Consumer Commission’s review of its monopoly power, Facebook is asserting its commercial interests should prevail over the public interest. Indeed, Facebook seems more comfortable with its networks supporting despots and dictatorships by algorithmically fomenting division than respecting a government working in support of democracy.

This decision was made hours after our elected leaders form across the political spectrum endorsed the work of experts to deliver a significant reform that will make our democracy stronger.

The News Media Bargaining Code, the brainchild of the ACCC and its chairman Rod Sims, was a systemic response to the monopoly power that Google and Facebook exert over advertising and its impact on public interest journalism.

Under Australian law there is now a legal mechanism to place a value on fact-based news within the digital platforms that have come to dominate our online world with their algorithmically powered engines of division, distortion and denial.

The spectre of the code – with its global precedence – has already begun to do its job. Google has rushed to finalise premium-content deals with media organisations. These deals will not only make the Australian media, which has shed more than 5000 jobs in the past decade, stronger; it will help address the built-in weaknesses of digital platforms that refuse to discriminate fact from fiction.

And they were only the first step in the program of digital platform reform that the ACCC has laid out to address the power of the Google/Facebook monopoly.

A review of privacy laws is currently under way, looking at the way Australians’ personal information is collected and monetised by online platforms with a view to designing consumer rights and protections. A separate process is focussing on the responsibilities social media should have to address harmful misinformation and disinformation, dispelling for good the myth that they are platforms with no broader social obligations for the harm they cause.

There’s also a review of the creepy world of ad-tech, where automated, virtual trading floors are running real-time auctions for our attention every time we visit a news page.

But this sort of expression on democratic reform is a red line for Facebook, which believes its network is stronger than our public institutions.

Australians need to respond with our mouses. We need to unfriend Facebook and find alternative places to connect and collaborate, free of its surveillance models and reckless self-interest.

Peter Lewis is the director of the Centre for Responsible Technology.

The most important news, analysis and insights delivered to your inbox at the start and end of each day. Sign up here.

Who is Lara Trump and who is she married to?

Spain turns 25 tourists away from Majorca straight after landing