How will Britain’s vaccine rollout cope with new Indian variant? Jab sites prepare for flood of patients as doses are accelerated for over 50s and clinically vulnerable amid surge in infections

Covid vaccine sites are preparing for floods of patients as health chiefs push to ensure all over-50s are jabbed to tackle the current surge in cases.

The Joint Committee on Vaccination and Immunisation (JCVI) yesterday advised ‘every effort is made to promote vaccine uptake’ in people who were in the top nine priority groups who have yet to have their first jab — despite all being invited for one a month ago.

Over-50s, health and social care workers and the clinically vulnerable will also have their second doses accelerated from 12 to eight weeks ‘where supply will allow’.

The plans to speed up second doses would require another 10million doses are handed out to over-50s in the next few weeks.

The JCVI insists that alongside the new measures to ensure all over-50s are jabbed, the general vaccine drive ‘should continue to be rolled out as quickly as possible’. And the Department of Health and NHS England both told MailOnline they are confident every adult will still have had a first inoculation by the end of July.

Ministers are confident they will be able to continue the roll-out at the same pace because most people waiting for second doses in their over-50s will be receiving an AstraZeneca jab while under-40s will receive Moderna or Pfizer vaccines.

But while there may not be an issue on the supply side, vaccine sites will have to be operating at full capacity to dish out the planned jabs to over-40s in the same time period as they boost second jabs to over-50s.

A screenshot shared on social media revealed that the message on the site added: ‘Lots of people are trying to book an appointment at the moment.’

New Covid cases in the UK have remained flat this week, falling slightly week-on-week yesterday by 0.97 per cent to 2,047 today.

But cases of the Indian variant have nearly doubled across Britain, becoming the dominant strain in four areas of the country and prompting fears of a third wave.

The Government’s scientists have said they are confident the strain is not more deadly and that vaccines will work well against it. But they warn the death toll could climb significantly by the fact it is able to infect more people than previous strains and there are still 30million unvaccinated Britons.

Surge testing is being deployed in 15 hotspots, mostly in the North West of England, in an effort to contain the strain and pre-empt a deadly third wave. 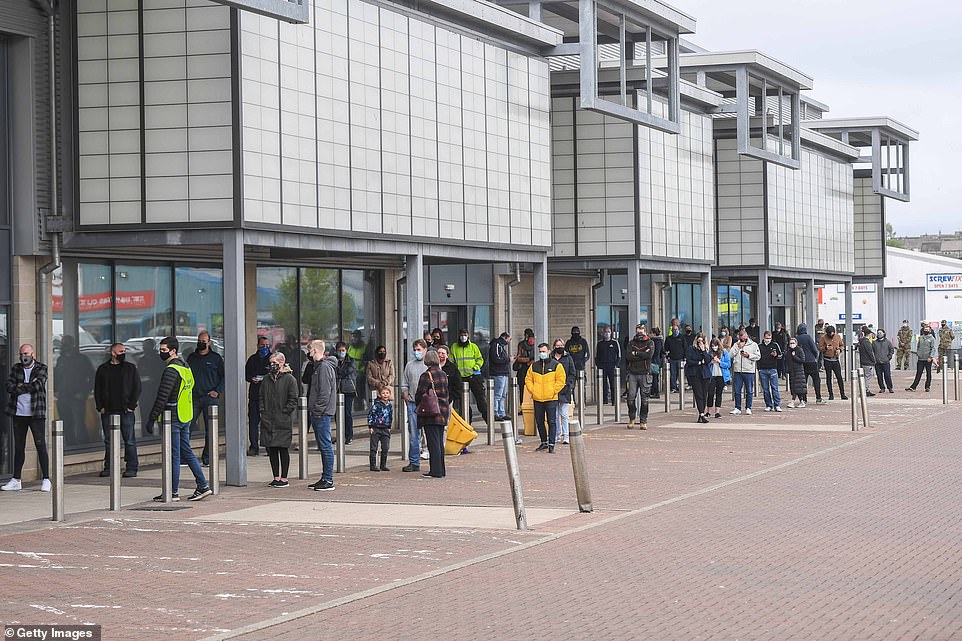 Covid vaccine sites are preparing for floods of patients as health chiefs push to ensure all over-50s are jabbed to tackle the current surge in cases. Pictured: Large queues for outside a vaccine centre in Elgin, Scotland, on Thursday 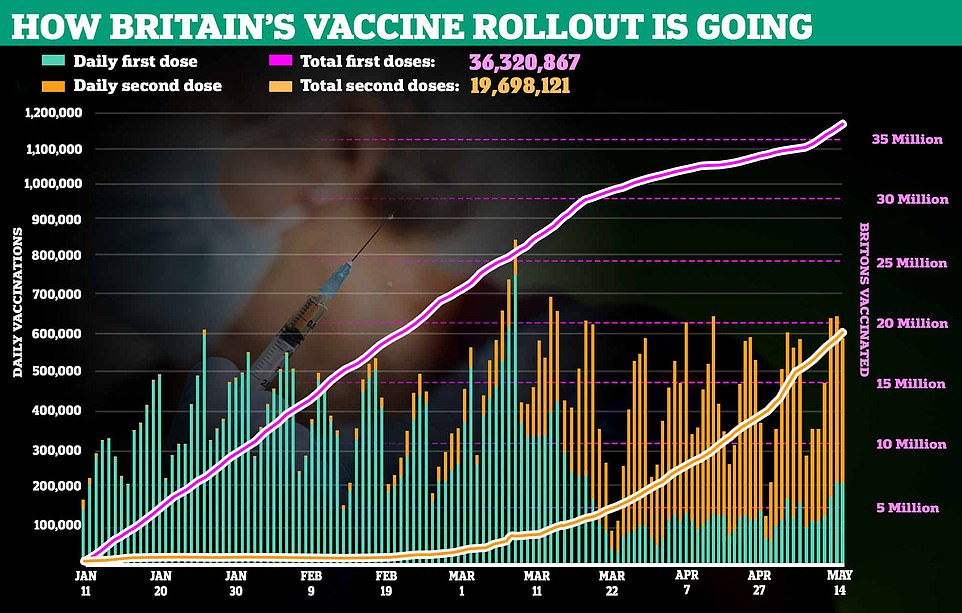 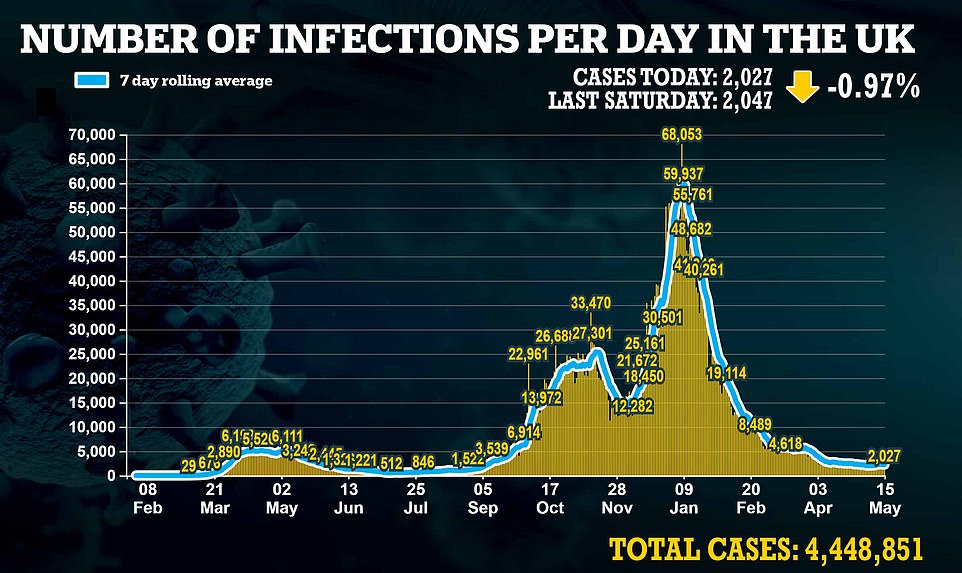 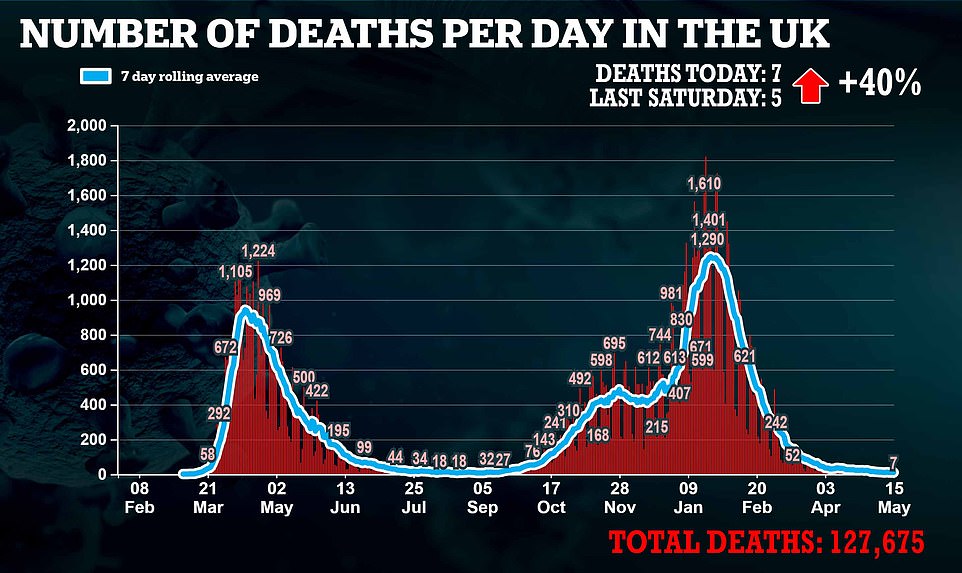 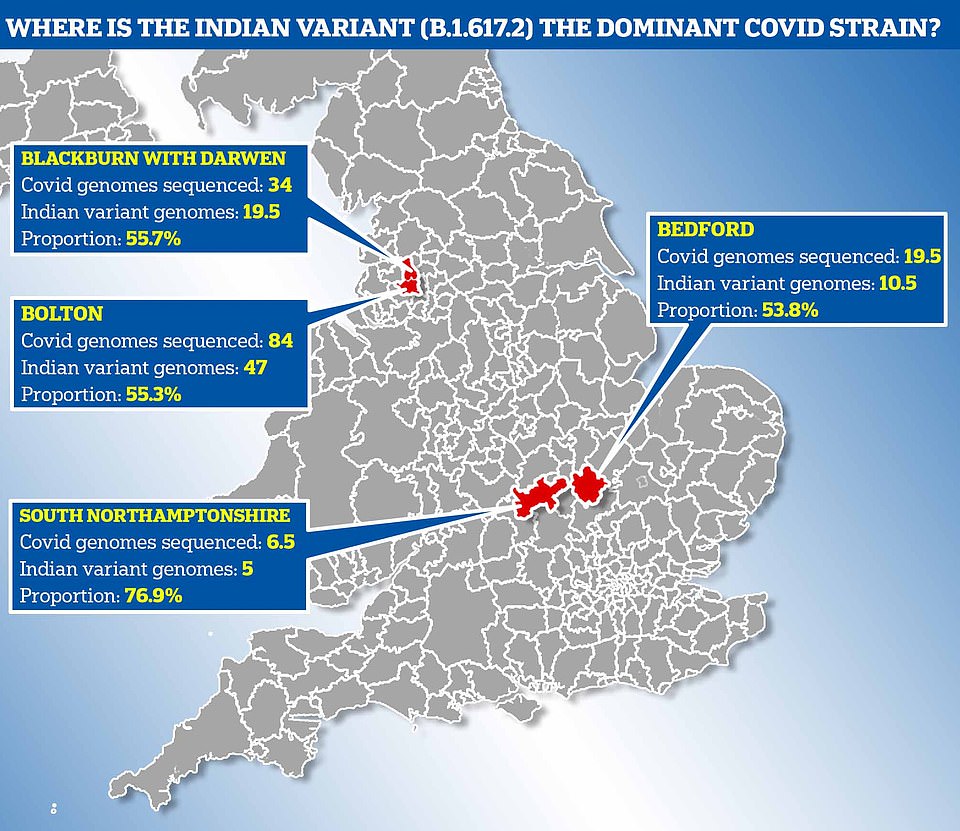 An emergency meeting will be held by experts at the Government’s Scientific Advisory Group for Emergencies committee on Thursday after it was found that India’s Covid variant is now dominant in five local authorities in England. There are mounting concerns that it is more infectious than the currently dominant Kent strain

There is a ‘realistic possibility’ the Indian Covid variant is far more transmissible than the Kent strain and could lead to up to a thousand deaths a day by summer, the Government’s scientists warned last night.

The SPI-M subgroup said it was confident the mutant B.1.617.2 strain was more infectious than the currently dominant variant, and that it could spread up to 50 per cent more easily.

It warned that pressing on with easing all lockdown restrictions on June 21, as is currently the plan for England, could lead to more than 10,000 more people being hospitalised with the disease daily by Autumn.

The bleak forecasts were presented to No10 this week after cases of the strain more than doubled in seven days and four people were found to have died from the variant.

Scientists advising SAGE this month estimated what a more transmissible strain could do to the country after lockdown is lifted in June and claimed it could trigger up to 20,000 hospital admissions per day in a worst-case scenario. January’s peak, which nearly crippled the NHS, was around 3,800 a day in England.

But there are still glimmers of hope, with experts saying it remains unclear whether the current variant spreads significantly quicker or whether it is a coincidence it sprung up in places that already had high transmission or simply emerged in clusters linked to people flying into the country from abroad.

Vaccines are still likely to work against the strain, research suggests, and there are no signs it is more deadly. But faster transmission means more people getting infected and more opportunities for ‘vaccine failure’ – when people get sick even after having a jab, which may happen to between five and 15 per cent of people.

The variant still only makes up a minority of cases nationwide – around 10 per cent – but it is growing quickly and particularly in hotspots such as Bolton, Blackburn, Bedford and Sefton in Merseyside, where it is confirmed to account for more than half of all positive tests.

Professor Wei Shen Lim, Covid-19 Chair for JCVI, said: ‘Due to the rapid rise in cases of the B1.617.2 variant of concern and notable transmission in parts of the country, the JCVI advises that every effort is made to promote vaccine uptake in those who remain unvaccinated in priority cohorts one to nine — these people remain at highest risk of severe outcomes from Covid-19.

‘Where vaccine supply allows, particularly in areas where B1.617.2 is a major threat, the second dose of vaccine should be brought forward from 12 to eight weeks.

‘This is only possible because everyone in the Phase One priority groups has already been offered a first dose.

‘Alongside these measures, the vaccine programme should continue to be rolled out as quickly as possible.

‘The capacity of vaccination centres should be maximised to enable rapid rollout.’

Professor Chris Whitty last night said there was no likelihood the move to fully vaccinate all over-50s as soon as possible will affect the roll-out to under-40s.

Chris Whitty said: ‘The prioritisation of second doses will not, we think, delay the situation, the rollout, for people who are in younger ages.’

It comes amid debate around whether Prime Minister Boris Johnson’s decision to press ahead with lockdown easing across England on Monday is safe given concerns around the Indian variant.

Professor Graham Medley, chair of the Spi-M subgroup of Sage and professor of infectious disease modelling at the London School of Hygiene and Tropical Medicine told MailOnline experts would assess the growth of the Indian variant over the next four days before deciding whether to go ahead with the June 12 date for going ‘back to normal’.

He said: ‘Decisions in epidemics are about balancing risks and harms.

‘The point of scientific advice is to help assess the risks and harms.

‘The risks of the epidemic and the harm caused by the virus have been reduced by the vaccines, but they are still there.

‘We will learn a lot more about the impact of the B.1.617.2 variant in the coming days and will re-assess the risks.

‘Step 4 of the roadmap out of lockdown is going to depend on how the risks look at the time.’

But other experts have argued the next stage of lockdown easing on Monday should have been delayed because of the risks posed by the variant.

Minutes released by the Scientific Advisory Group for Emergencies (Sage) from their meeting on Thursday said ‘it is highly likely that this (Indian) variant is more transmissible than (Kent) and it is a realistic possibility that it is as much as 50 per cent more transmissible’.

The experts warned there will be an even faster increase in cases if restrictions are lifted, suggesting a peak of infection can be expected after Monday’s easing, and certainly at step four of the road map in June, when all legal limits on social contact are due to end.

Sage said: ‘If this variant were to have a 40-50 per cent transmission advantage nationally compared to (Kent), sensitivity analyses in the modelling of the road map in England indicate that it is likely that progressing with step three alone (with no other local, regional, or national changes to measures) would lead to a substantial resurgence of hospitalisations (similar to, or larger than, previous peaks).

‘Progressing with both steps three and four at the earliest dates could lead to a much larger peak.’

Professor Christina Pagel, member of Independent Sage and mathematician at University College London, today told MailOnline the decision to open up on Monday ‘is going against scientific advice’.

She said: ‘Test 4 for easing the roadmap says: “Our assessment of the risks is not fundamentally changed by new Variants of Concern”.

‘It is crystal clear from Thursday’s SAGE meeting minutes that this test has not been met.

‘The Prime Minister and Chief Medical Officer both said that this variant could cause a significant new wave of not just infections, but hospitalisations if we move to step 3 of the roadmap.

‘Given that, the decision to press ahead is going against scientific advice and the tests.’ 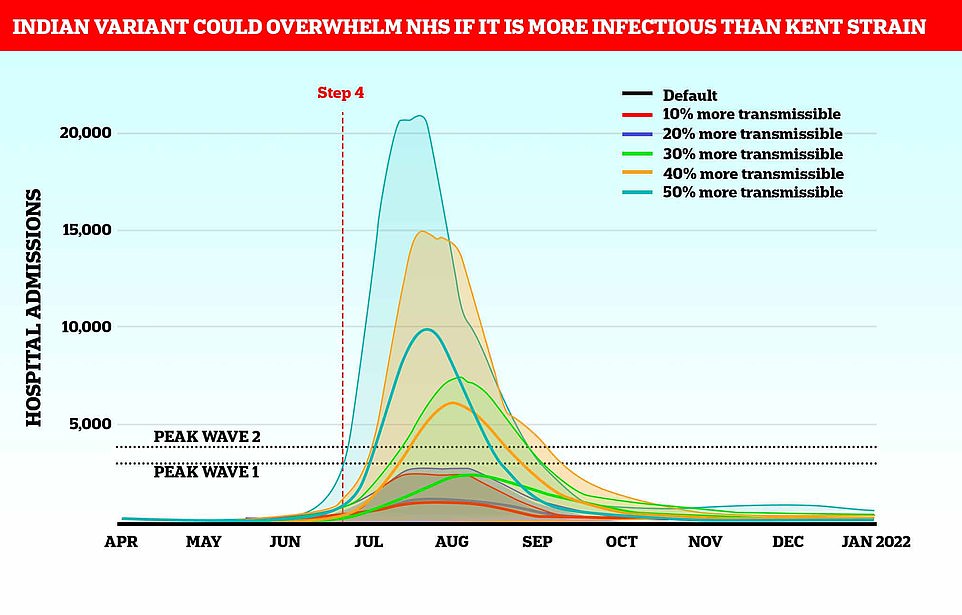 A Warwick University model of a more infectious variant after lockdown is completely lifted on June 21 suggests that any more than a 30 per cent increase in transmissibility compared to the Kent variant could lead to an August peak of daily hospital admissions that is higher than either the first or second wave. In a worst-case scenario with a variant 50 per cent more transmissible, hospital admissions could surge to 10,000 per day or even double that  (Thick lines indicate the central estimate while the thin lines are possible upper limits known as confidence intervals) 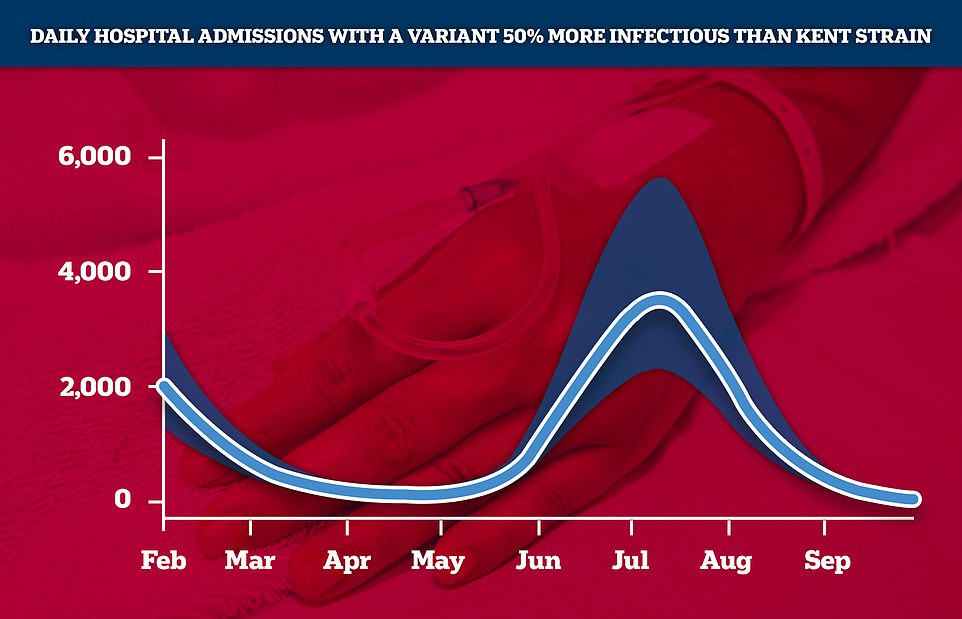 Similar but less grim modelling by the London School of Hygiene & Tropical Medicine suggested that a 50 per cent increase in transmissibility could trigger a peak of 4,000 admissions per day in July or August, possibly extending to 6,000 per day 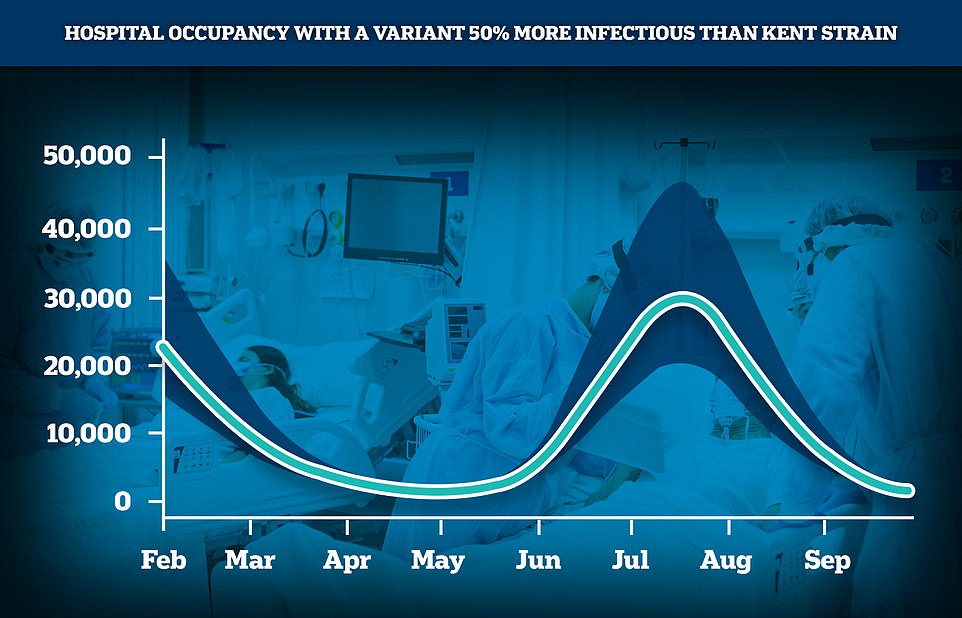 The LSHTM model suggested hospitals could have another 30,000 inpatients by the end of July – up to around 45,000 – compared to the current 845 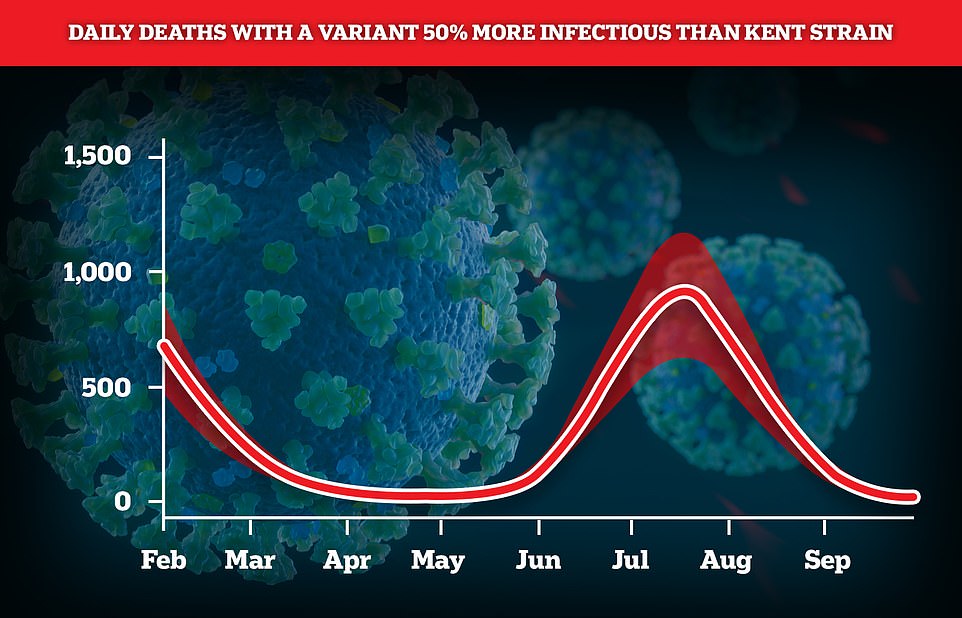 The LSHTM team suggested that there will be 1,000 deaths per day in August if the variant is 50 per cent more transmissible – which would be less than the 1,900 seen at the peak this January

Bomb threats reported at news outlets, government buildings across US