Jacob Rees-Mogg orders MPs ‘back to the office’ by June 21: Commons Leader says Parliament must not be behind nightclubs in Boris Johnson’s lockdown roadmap

Jacob Rees-Mogg today suggested MPs should be back to normal working in the House of Commons no later than mid-June.

The Commons Leader pointed out that nightclubs in England are due to reopen from June 21 under the final step of Boris Johnson’s proposed lockdown reopening.

The Tory frontbencher said the Commons must return to being a ‘proper chamber’ after months of social distancing, limits on numbers and the use of video screens.

Sir Lindsay told MPs he will be presenting his own roadmap for the Commons at a meeting of the House of Commons Commission next week, and denied he wanted the full reopening delayed until September. 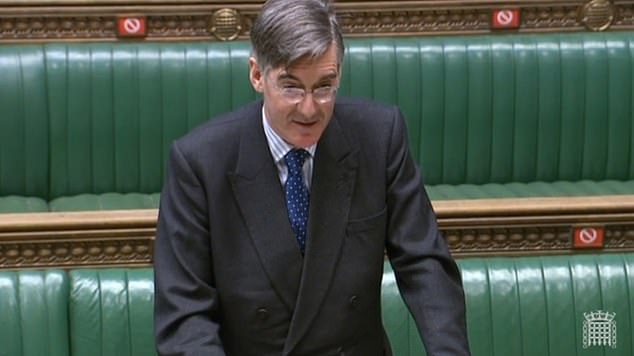 The Covid-19 pandemic has resulted in social distancing measures limiting attendance on the floor of the Commons chamber to 50 MPs, with many more contributing to proceedings via Zoom.

Conservative MP Pauline Latham told Mr Rees-Mogg that the Government’s roadmap is ‘slightly cautious’ and compared the Commons to a ‘ghost town’.

She added: ‘Can I be reassured by the Leader of the House that the House of Commons will go no slower than the roadmap out of lockdown that the public are going to have to follow, because if we do we’ll look completely out-of-touch?’

Mr Rees-Mogg said MPs have a constitutional right to access Parliament, adding: ‘I think as the restrictions are being lifted members may feel entitled, may desire, may want to exercise that right.

‘But I also agree with her point that we should go no slower than the country at large.

‘It seems to me that if nightclubs are opening on June 21 – which I think are more (Ms Latham’s) scene than they are mine, perhaps we should go there together – if they’re open then for heaven’s sake the House of Commons should be open properly. We can’t be behind nightclubs, Mr Speaker?’

Sir Lindsay added: ‘Nobody is stopping MPs from coming. What we’re saying is let’s do the right thing by each other, nothing else.

‘(Ms Latham) may have thought I only want to reopen in September, I want to reassure her that is definitely not the case, hence why I’m coming forward with a road map to the commission to make things happens absolutely in line with what’s going on.’

‘Debates with full interventions are much better than debates that are a series of monologues read out, pay no attention to what has been said beforehand and people just fill the airwaves for three minutes.

‘We want to get back to being a proper chamber and I hope we can do so in line with the general road map.’

Mystery virus could be killing hundreds of elephants in Africa