A jealous husband and his son have been jailed for four years after a savage ‘Rambo’ knife and hammer attack on his estranged wife’s new lover.

Craig Shortman, 43, and Dillon Gillott, 20, caused Neil Twist’s head to ‘explode’ with blood after the pair ambushed him as he walked down the street with Julie Gillott in Salford.

During the beating, Mr Twist, also 43, was stabbed by Shortman in the thigh and buttocks with a military-style hunting knife while Gillott struck the victim over the side of the head with the hammer.

Mrs Gillott, 43, tried to intervene but was unable to and blood poured from Mr Twist’s head. 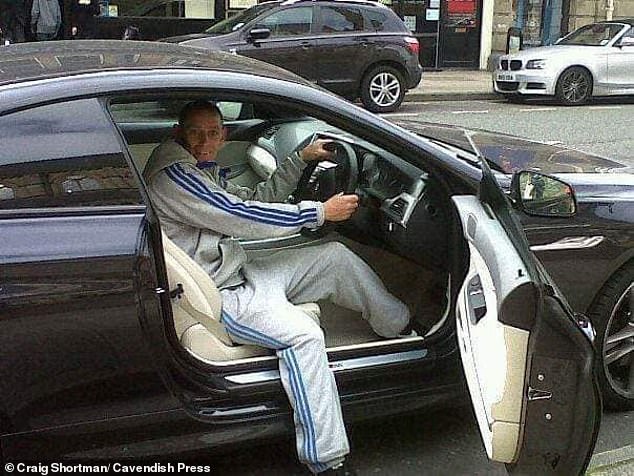 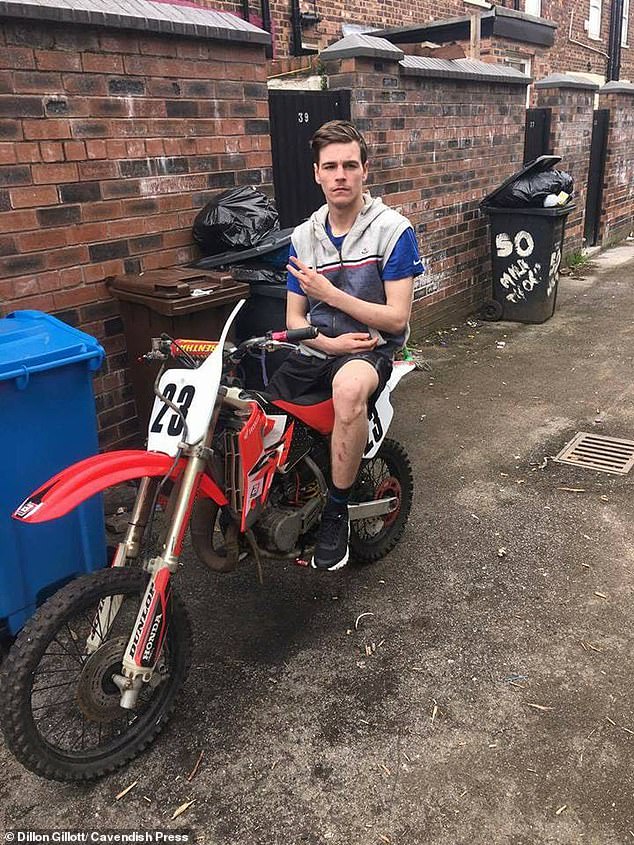 Dillon Gillott, 20, helped his father batter his mother’s new lover. Both father and son have been jailed for four years

A member of the public had to patch up the wound with a tee-towel while they waited for an ambulance.

The victim was treated at hospital for a hematoma and had wounds on his face, leg and buttocks.

At Manchester Crown Court, Shortman and Gillott jnr, both of Little Hulton, Salford, admitted inflicting grievous bodily harm and were each jailed for four years.

Prosecutor Robert Elias said: ‘Jealousy is often called the green-eyed monster. In this case the defendants are father and son, and the victim Neil Twist had started a relationship with Mr Shortman’s ex-wife and Mr Gillott’s mother several months before this attack.

‘Mr Shortman had not yet divorced from his now ex-wife and it is clear he was jealous of the new man in her life.

‘At around 4pm on 21 October 2019 the defendants got in their car armed with a knife and a lump hammer and came across the victim in Salford. 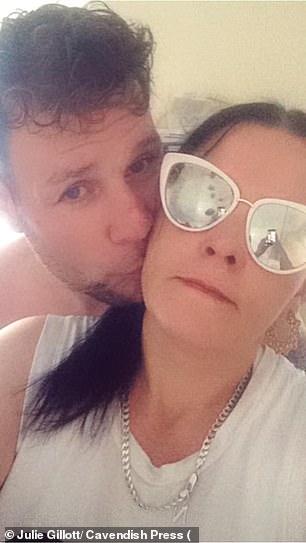 ‘They saw him walking down the street with his partner and attacked him using these weapons. Mr Shortman had a knife described as military-style and Mr Gillott had a lump hammer, hitting the side of the victim’s temple repeatedly in the same place.

‘At the same time Mr Shortman stabbed the victim in his left thigh and buttocks. His partner tried to intervene as the final hammer blow caused blood to explode from the victim’s head. She phoned for an ambulance.

‘A member of the public came along with a tee-towel to stop the blood and an air ambulance had to be called, but the victim was taken to Manchester Royal Infirmary by a normal ambulance.

‘The victim had a hematoma, blood had collected on the right side of his face and he had a 3cm laceration on his face, as well as wounds on his left buttock and thigh. The wounds were unpleasant, but the victim was lucky they were not substantially worse.

‘The defendants were both arrested at their home address the next day. As police came to the door Mr Gillott tried to escape through the window but was rugby tackled by the police. Mr Gillott replied ‘no comment’ at interview but Mr Shortman said his wife had made false accusations about him. He was trying to blame her but she was completely blameless.’ ‘

In mitigation Mr Shortman’s lawyer David Bentley said: ‘He understands custody is not the way forward for him and has started to better himself.’

For Gillott, David Bentley said: ‘Love can cause people to act in misguided ways.

‘There is an unfortunate background of domestic violence between the victim and the defendant’s mother although no allegations have been made to the police. This explains why he took part in the attack on the victim.

‘He is starting to grow up. He is remorseful for this offence.’

Sentencing Judge Suzanne Goddard QC told the pair: ‘You are father and son and it is a great tragedy that you appear in the dock together in relation to these serious allegations.

‘This wound was a serious injury and you were both lucky the victim did not sustain fatal injuries having been attacked with that sort of weapon. This was a particularly nasty incident in a public place in the middle of the afternoon.

‘There is little that can be said for either of you that would reduce the length of your sentences.’