A group of County Court judges is urging the state’s law reform body to give judges more discretion over who is placed on the sex offenders register.

In a submission to the Victorian Law Reform Commission, the County Court of Victoria said judges should have more powers to decide whether a convicted sex offender should be placed on the register and to expunge the registration of criminals who have previously been registered. 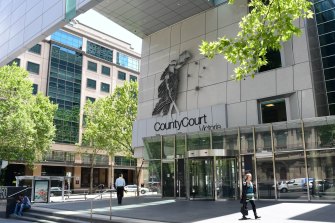 Some County Court judges have concerns with the sex offenders register scheme.Credit:Vince Caligiuri

The only current exemption is for offenders under 19, who can apply to be kept off the register if they were 18 or 19 when they committed the crime. The County Court wants this exemption to be extended to older offenders.

Under current laws, adults convicted of sexual offences are automatically listed for a minimum of eight years while minors face a minimum registration of four years.

“This is based on the notion and evidence that supports that many individuals do not reach their full maturity until mid to late twenties,” the submission says.

The Victorian Law Reform Commission’s review into how the justice system can improve its response to sexual offences asked legal bodies and courts to provide insights into the operation of the state’s often-criticised sexual offences laws.

One particular area – the sex offenders register – has been criticised by several bodies, including Victoria Legal Aid, the Law Institute of Victoria and Liberty Victoria, as out of date and overly punitive.

Liberty Victoria criminal policy committee member barrister Michael Stanton said judges are best placed to decide whether someone should be on the list because they have all the facts about a case.

“The best person to make that decision is a judicial officer that has all the facts, that has expert reports in relation to risk assessments,” Mr Stanton told ABC Radio Melbourne.

“The problem is, like all these mandatory provisions, whether it’s sentencing or registration, it’s using a sledgehammer to crack a nut.”

He said that self-reporting obligations can be too burdensome and policing breaches of the list a difficult exercise for police. Victoria Police does not support the changes proposed by the County Court.

The County Court submission also claims that the mere prospect of being placed on the register can discourage people accused of sexual offences from pleading guilty, leading to lengthy hearings that make up the bulk of the court’s trial work.

“The prospect of an accused admitting to conduct and then being placed on the sex offenders register, often for significant periods of time, can contribute to sexual offence charges not progressing to a plea of guilty,” the submission says.

“If there was discretion in general to the placing of an accused on the sex offender register, it might result in more guilty pleas.

“Some judges are of the opinion that there should be the ability to expunge the registration of certain individuals who have previously been registered.”

Judges from the court also expressed concern about how the scheme can affect the ability for young offenders to rehabilitate.

The County Court also opposes the establishment of a separate court to deal with sexual offence matters, saying judicial burnout is common among people regularly dealing with the confronting subject matter and that maintaining one court allowed judges to share the load.

The Victorian Law Reform Commission says the purpose of the register is to prevent people from reoffending, to make it easier for prosecutors if someone reoffends, and to protect children from convicted child sexual offenders.

Anyone who has committed certain sexual offences against a child must be placed on the register when they are released into the community.

A person on the register must report personal details to police, including contact information, their internet provider and profiles, employment, and contact with children.

The register is not available to members of the public.

World’s most expensive island on the market for massive £360million

What is the new Covid strain and will it affect vaccine?