The toe-curling reality of politics: Chief whip Julian Smith caught on camera being snubbed by Tory rebel after he invites a camera crew watch him try to drum up support for the Brexit deal

No10 suffered fresh Brexit embarrassment today after footage emerged of the chief whip being snubbed by a Tory rebel he is desperately trying to persuade to back the PM’s deal.

In an extraordinary move, Julian Smith invited ITV News to follow him around for a week as he tried – and failed – to persuade MPs to back the PM in next week’s crunch vote.

But in a toe-curling clip, the chief whip asked Tory MP Philip Davies if he would support the deal only to have the Tory backbencher reply ‘no’.

Mr Davies blasted the PM’s deal and said No10 could only win his support if Mrs May went back to Brussels to get more concessions from the EU.

Tory party bosses were slammed for allowing the camera crew to film the scenes – with one ex Tory aide branding the stunt a ‘monumentally bad idea’.

In a cringe inducing exchange filmed in a parliamentary office, Mr Davies said: ‘It’s the people against Parliament at the moment and the government should be on the side of the people.’ 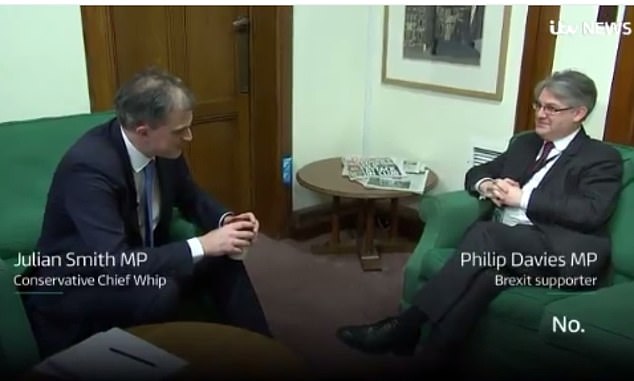 In an extraordinary move, Julian Smith invited ITV News to follow him around for a week as he tried – and failed – to persuade MPs to back the PM in next week’s crunch vote. But in a toe-curling clip, the chief whip asked Tory MP Philip Davies if he would support the deal only to have the Tory backbencher reply ‘no’

Mr Smith ploughed ahead, saying: ‘We are with this deal – and we have to get your support for it next Tuesday. So how do we resolve this by Tuesday? Because we need to get you…’

But Mr Davies, the MP for Shipley and a serial rebel, rebuffed the pleas, saying: ‘I’m not sure you can.

‘I don’t really see any alternative but for the Prime Minister to go back to the EU and saying we need something in here.

‘Because at the moment we have got a sittaion wheer it is easier to leave the EU than it is to leave this construct that we are putting together.

‘This is all about taking back control, and we are going to be in something that we can’t control.’

He added: ‘I always agreed with the Prime Minister that no deal is better than a bad deal, and to my mind this is a bad deal.’

The embarrassing exchange offers a rare glimpse behind the scenes of the work done by the whips – who are the enforcers of party discipline.

Their work – to persuade or pressure MPs to fall into line and back the Government – is usually shrouded in secrecy. 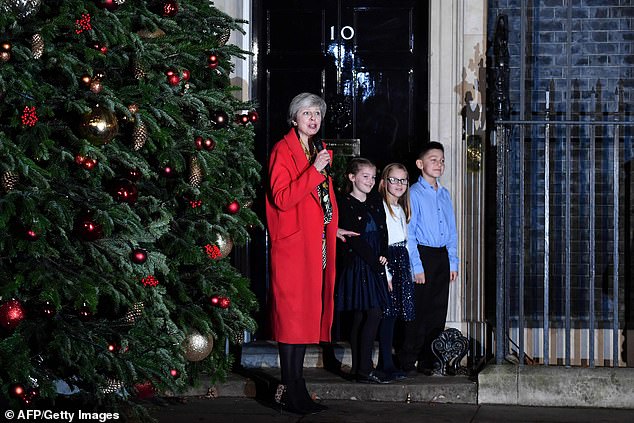 As her Brexit plans faced fresh turmoil tonight, the PM continued with her seasonal duties by tuning on the Downing Street Christmas lights and leading guests in a rendition of O’ Come All Ye Faithful outside No 10 tonight (pictured, the PM tonight)

But Number Ten were today slammed by former No10 aides and Tory advisers for  allowing the camera crews to follow the whip around as one of the most important parliamentary votes in decades looms.

Chris White, a former special adviser to William Hague, tweeted: ‘The Chief Whip, in the middle of the most important vote the PM has faced in her premiership, has allowed a TV crew in to film the inner workings of the whips office.

‘This is a monumentally bad idea.

‘Firstly, it’s a distraction. I was involved in the filming of the Michael Cockerell documentary Inside the Commons in 2014/15. It took ages – film crews asking for reshoots, the team ensuring nothing sensitive is said on camera that could be misconstrued.

‘Secondly, the Chief Whip needs to be focusing on improving the numbers.

‘Every moment of the whips time needs to be speaking to MPs, getting them onside, not doing interviews with journalists.’

Even frostier? Cambridges and Sussexes set for reunion at St Paul's