SUPER trooper Kate became the toast of the Scouts as she was presented with the group's highest prize for adults.

The Duchess of Cambridge heard youngsters trapped indoors had still managed to earn their badges during lockdown. 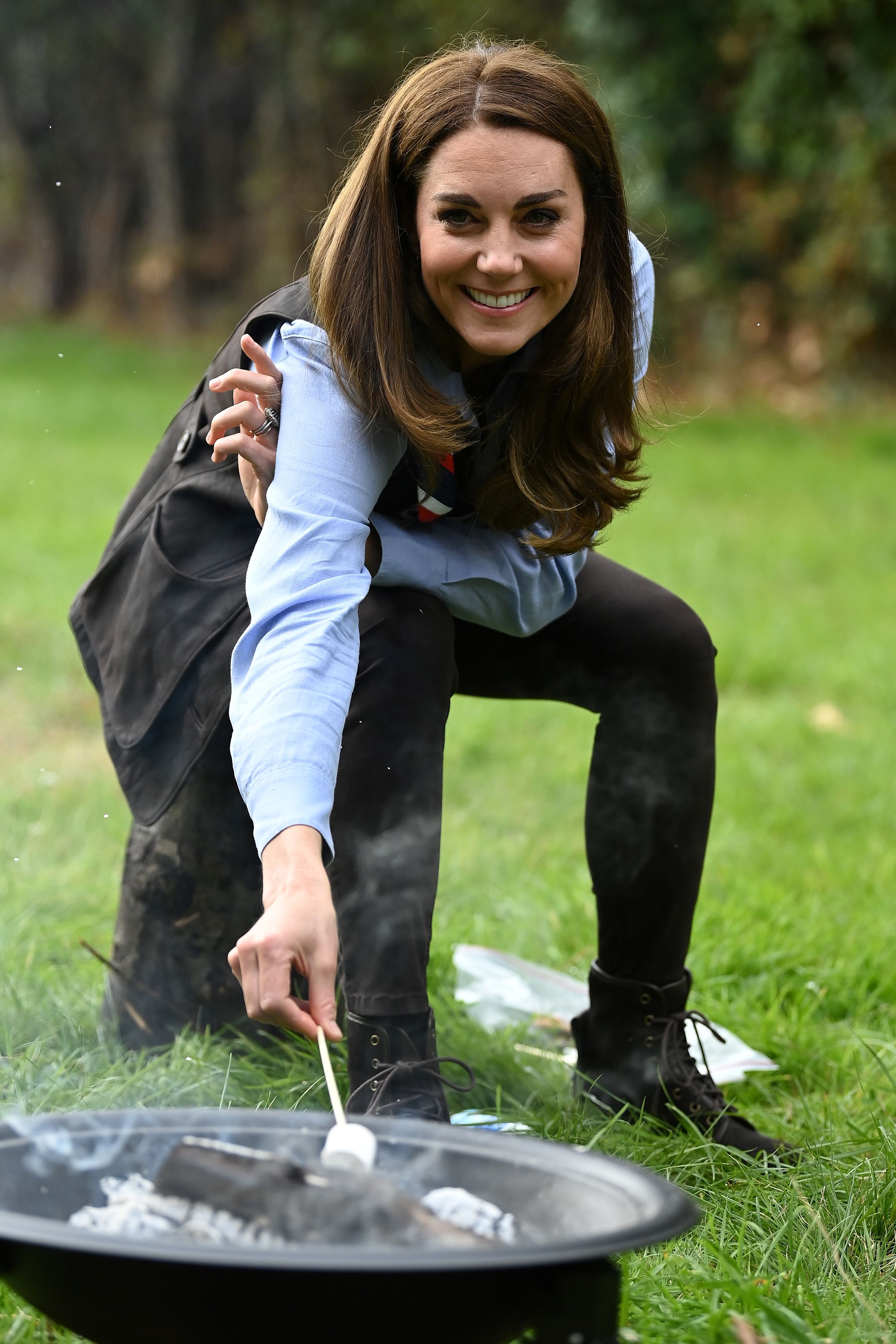 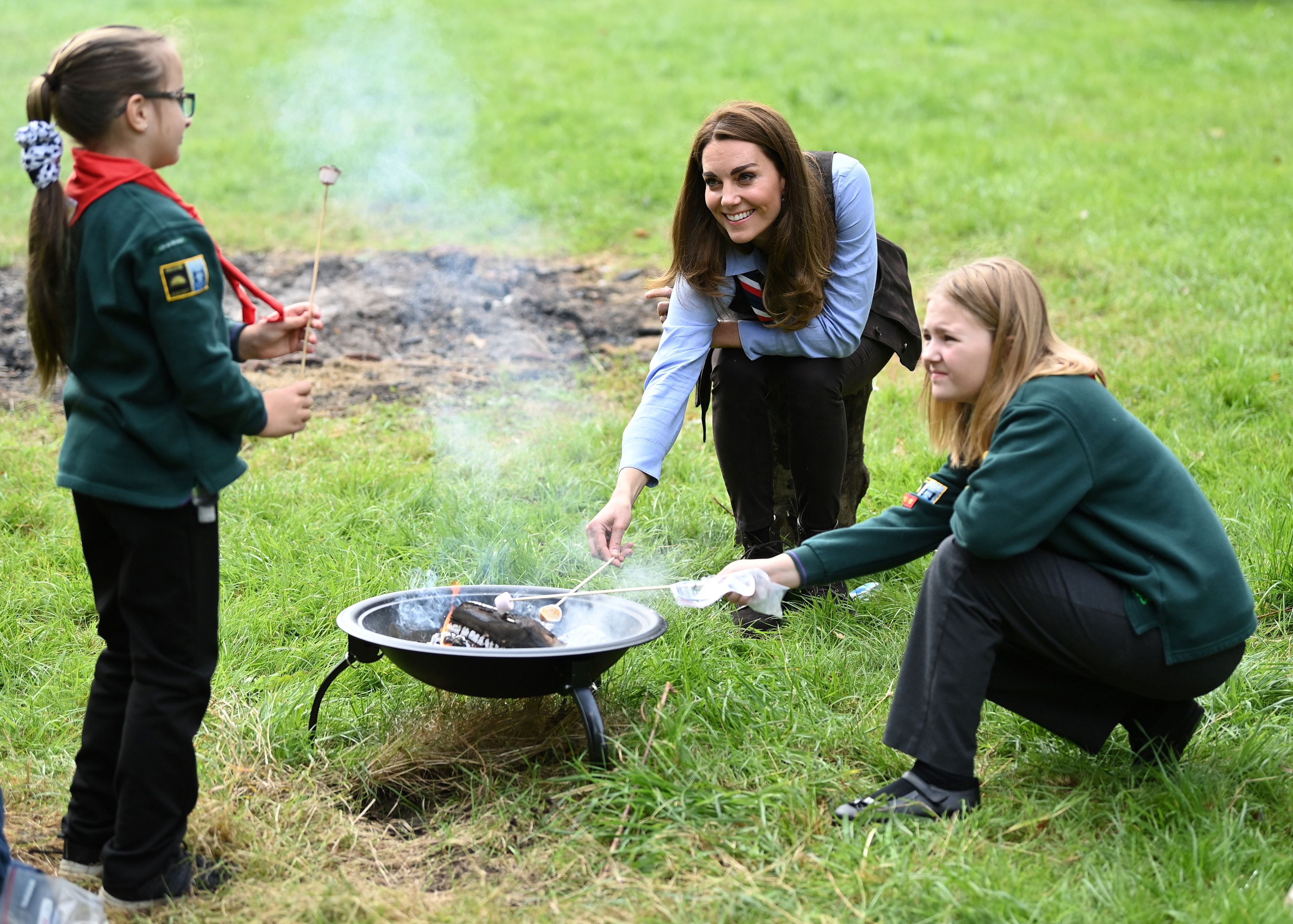 And how leaders held an indoor Scout camp for 110,000 youngsters stuck at home and a sponsored hike the distance to the moon.

Kate, 38, toasted marshmallows with Cub Scouts before picking up the Silver Wolf Award – the highest prize for adult volunteers.

She said: "I will wear it with pride."

Kate was also unveiled as the Scout's new Joint President of The Scout Association.

Dressed in brown trousers, boots and a gilet, with her Scout's UK Scarf, the duchess met youngsters from the 12th Northolt Scout Group in west London taking part in The Great Indoors during coronavirus.

She had previously volunteered for the Scouts in Angelsey eight years ago. 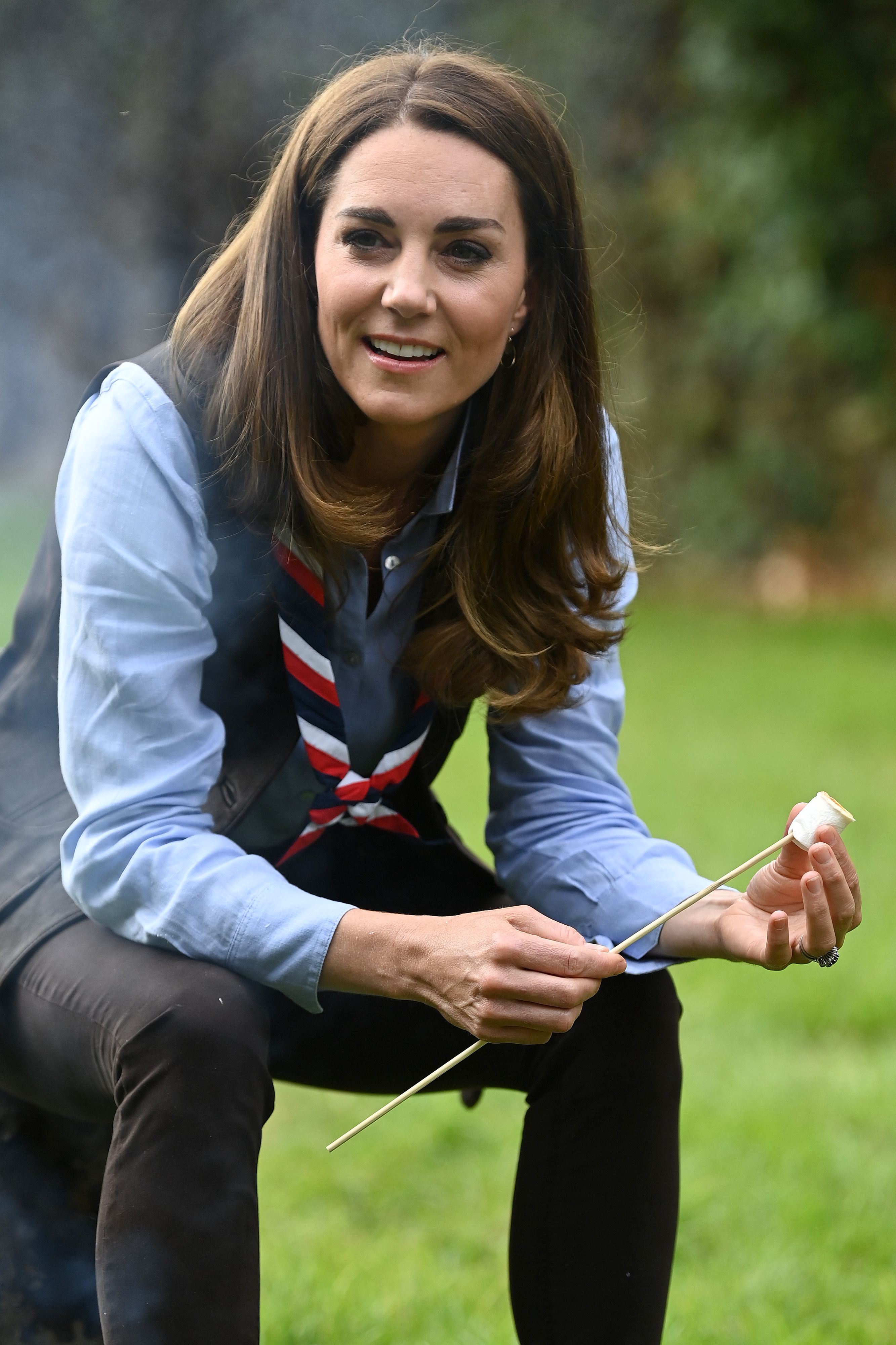 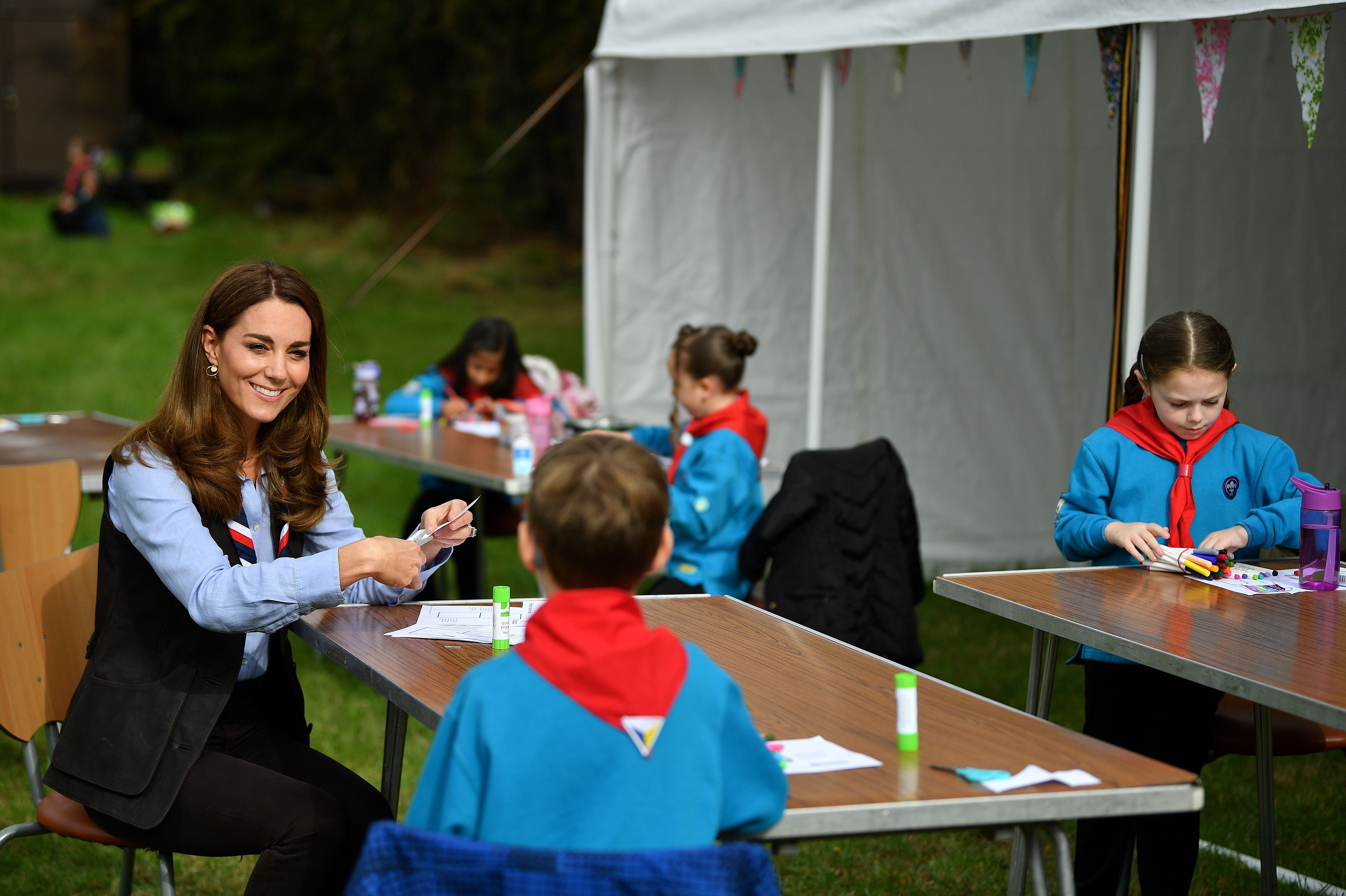 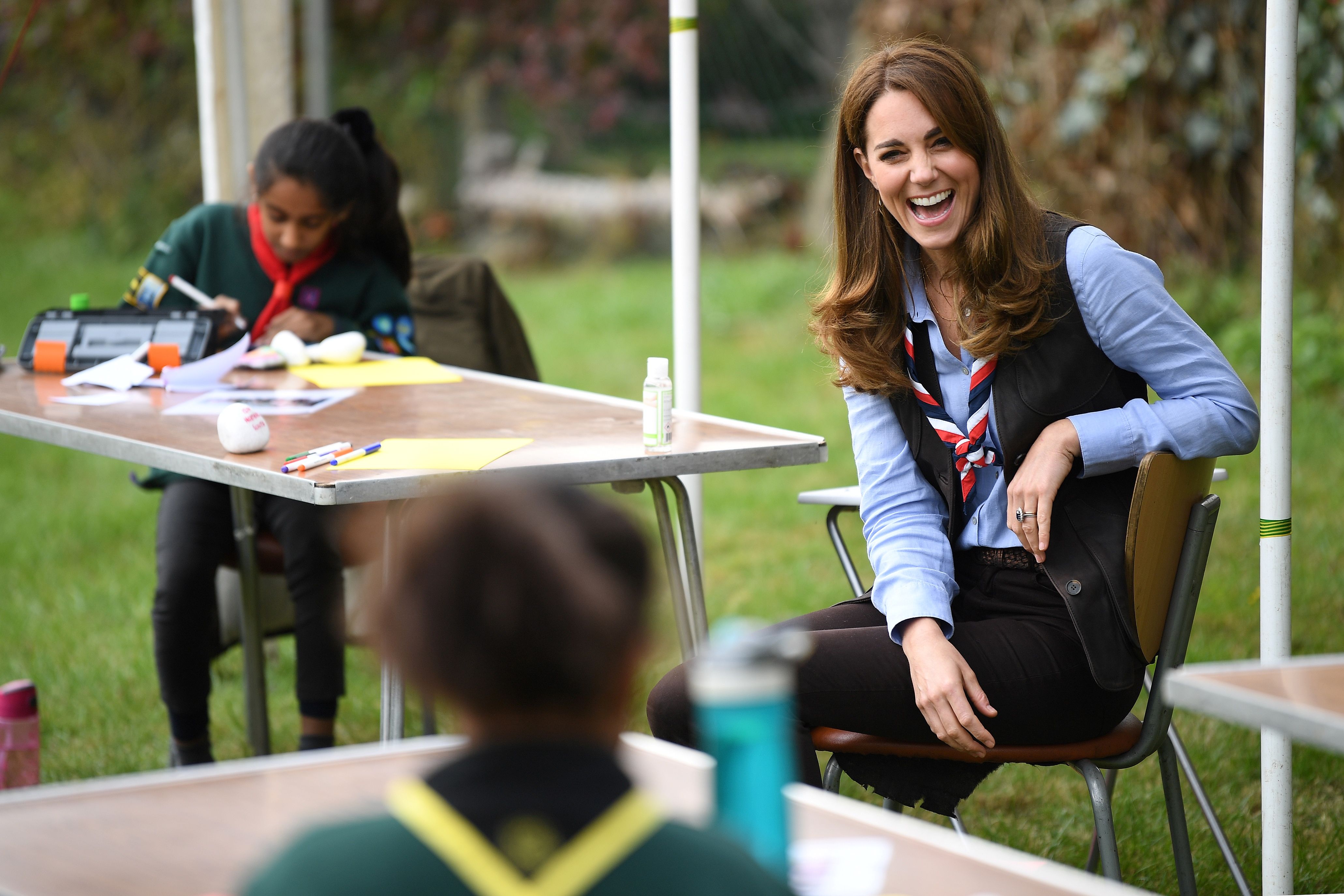 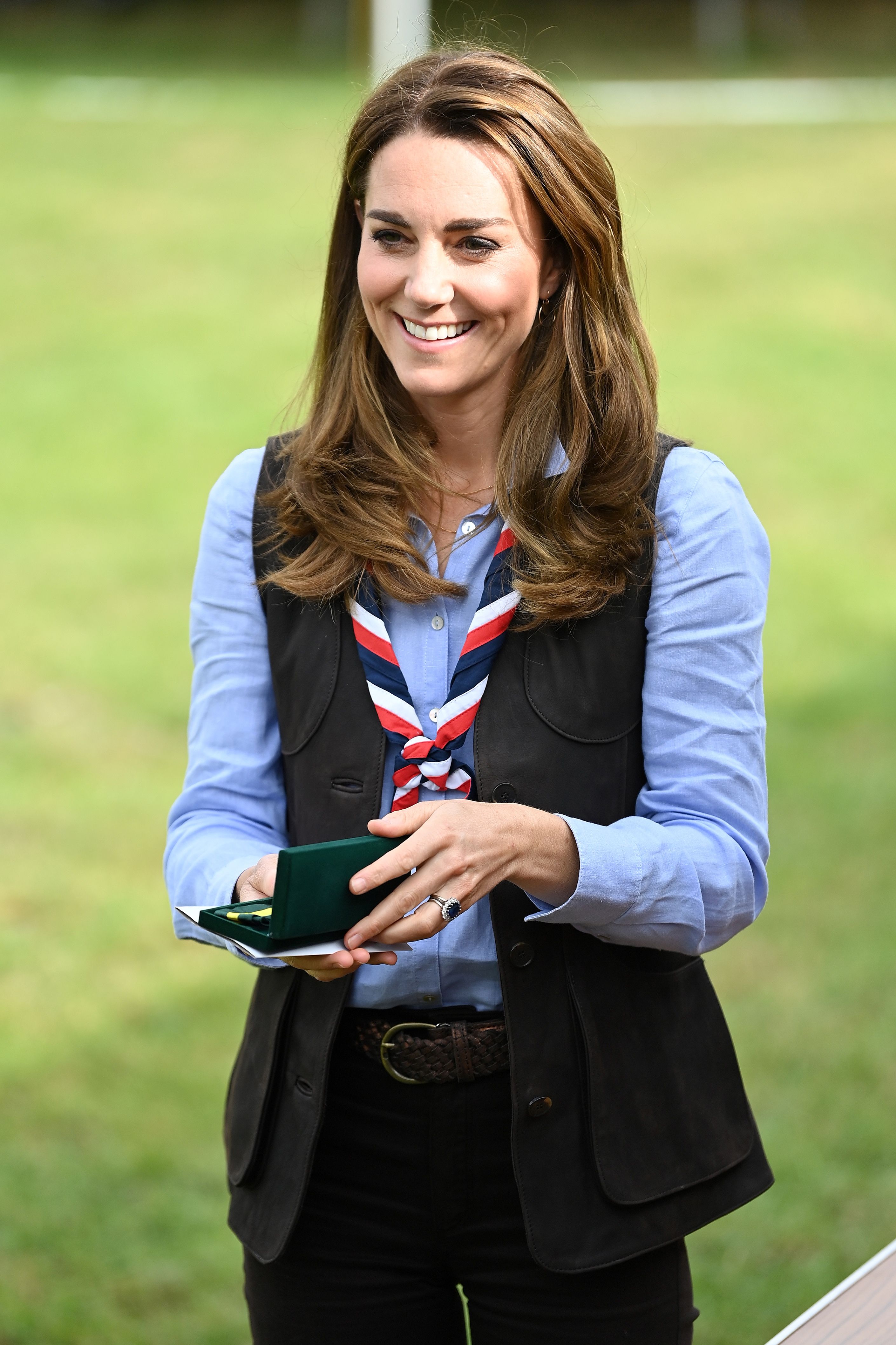 Speaking to Beaver Scouts while cutting out and decorating whirlybirds, she said: "It is a shame you haven't been able to go on any camps. It has been hard to get out and see your friends."

After her whirlybird fell to the floor, she said: "I don't think I'll get full marks."

Cub Scouts told the duchess along with youngsters from the movement across the country had seng handwritten cards to elderly people and those shielding from Covid-19.

They have also penned messages on pebbles.

Kate said: "That's a really lovely idea. It has been hard as no one can see each other. But these are really special. Well done you."

The duchess, mum of Prince George, 7, Princess Charlotte, 5, and two-year-old Prince Louis, proved an expert marshmallow toaster over the campfire.

Children revealed they had been holding Scout camps at home during lockdown.

Some camped in their back garden for two nights or even the living room and one in a bath, they said.

Toasting her marshmallow before taking a bite, Kate said: "You must have missed this."

Cub scout Megan Rummey-Middleton, 9, said: "My baby sister is always asking to go outside and play."

For many children and young people, The Scout Association plays a key role as they build relationships and develop the skills they need to succeed in later life.

Matt Hyde, Chief Executive of the Scouts, and 10-year-old Aisha, presented the duchess with her Silver Wolf Award.

He said afterwards: "The Silver Wolf Award is the highest award an adult can get for exceptional service and has been given by Chief Scout Bear Grylls.

“Everyone in the Scout movement is overjoyed that The Duchess of Cambridge is to become a Joint President."

TV adventurer Grylls, who could not make today's event as he is filming in the US, launched The Great Indoors in March.

Today's unveiling was Kate's first Presidency and is now Joint President of The Scout Association with The Duke of Kent, 84.

The Duchess of Cambridge said: "For many children and young people, The Scout Association plays a key role as they build relationships and develop the skills they need to succeed in later life." 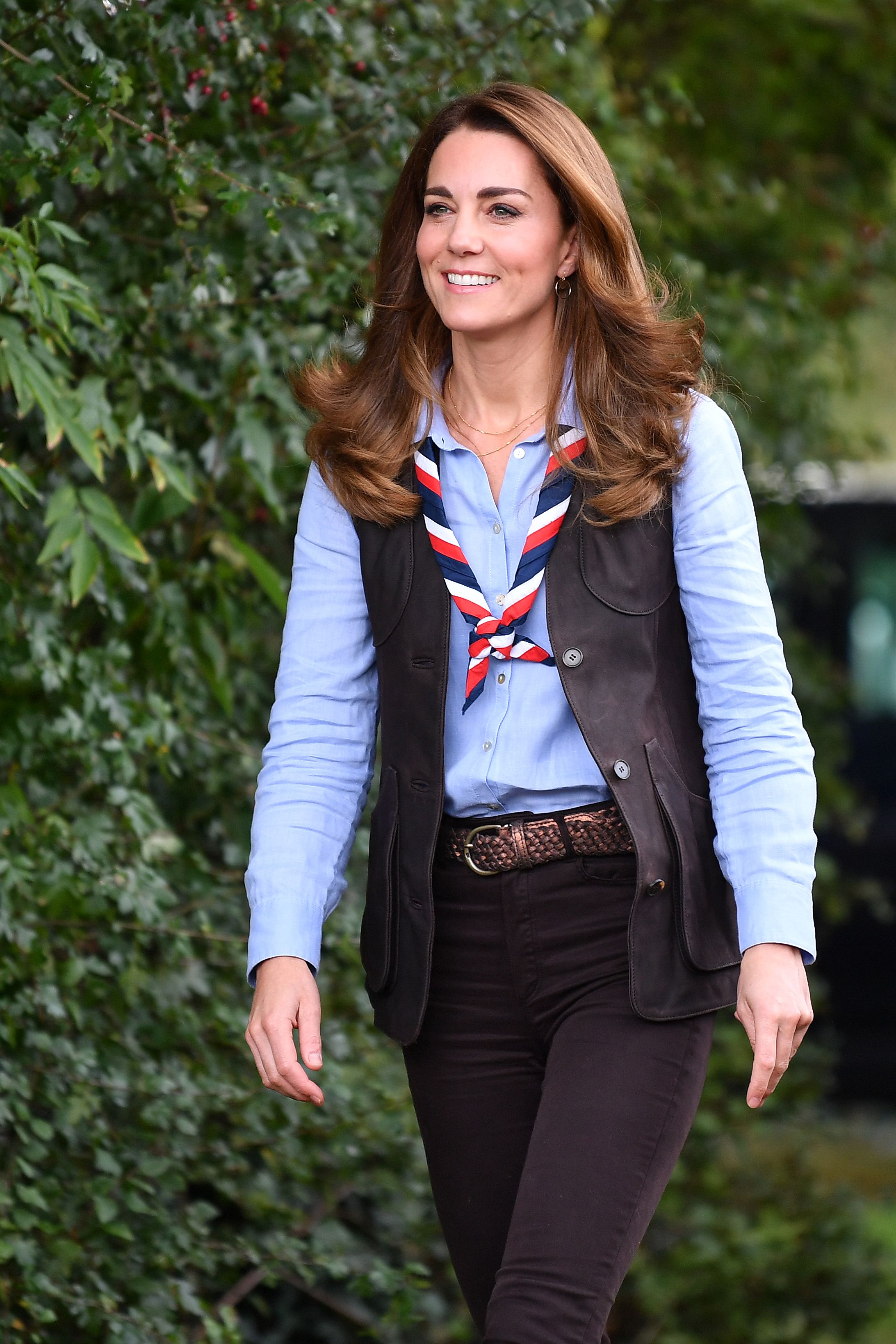 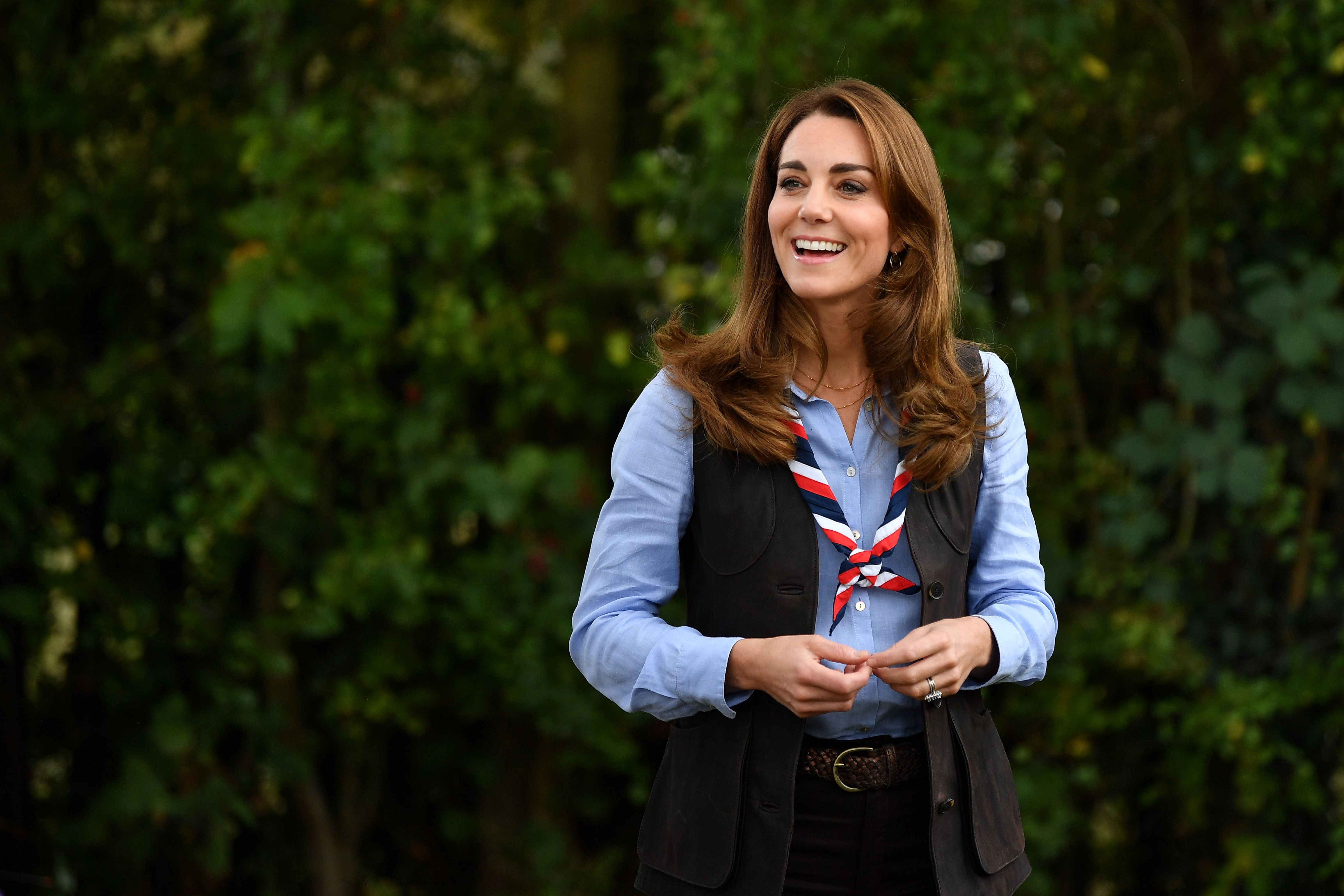 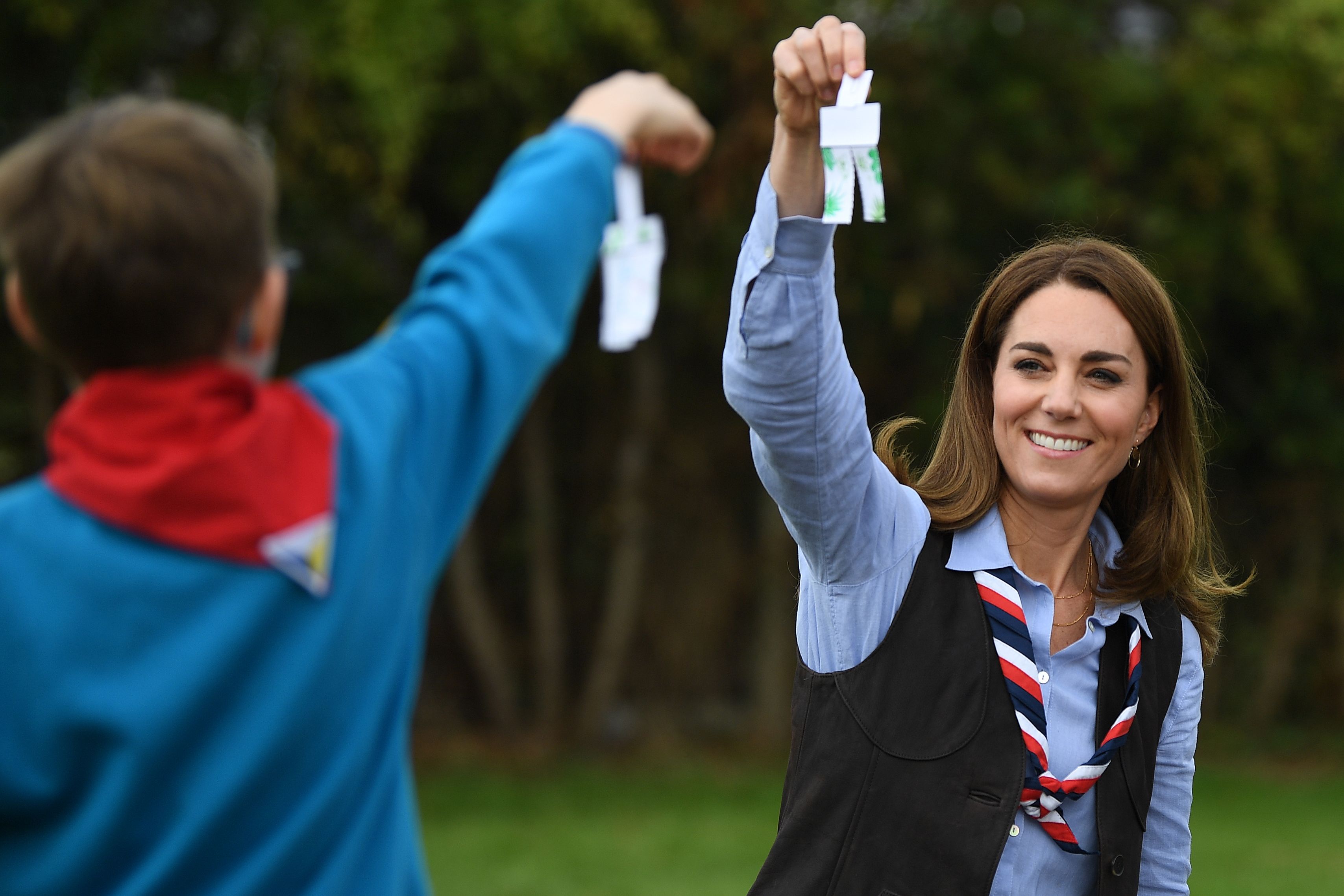 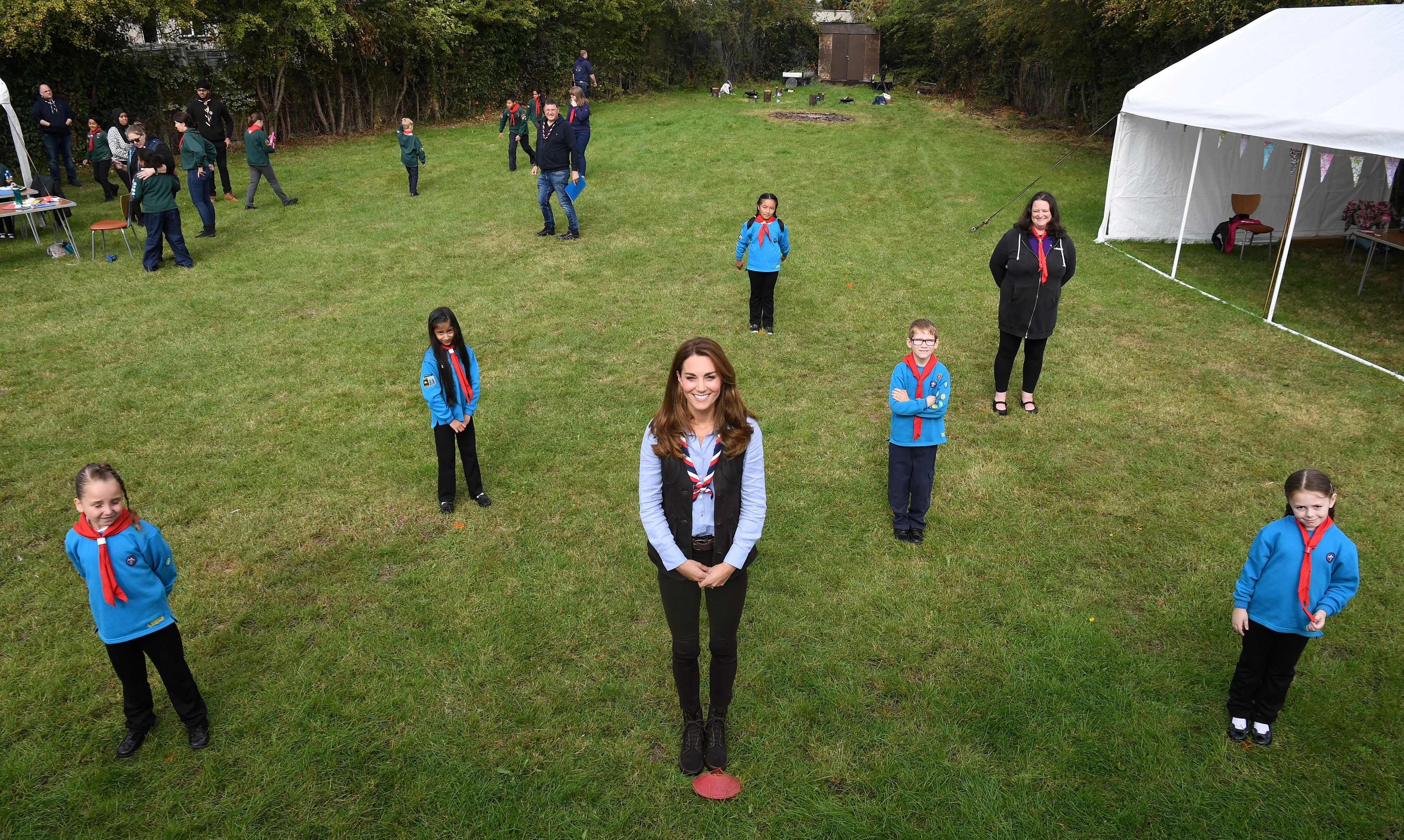 With inflation, gold notes and cards find their way into America's wallet

Uber driver among Brits returning from Italy: 'We're told NOTHING'