Keeping the middle seat empty on airplanes may HALVE the risk of Covid-19 spreading, statistician claims

Keeping the middle seat empty on airplanes halves the risk of passengers getting infected with the coronavirus, a study has suggested.

Professor Arnold Barnett, a statistician at the Massachusetts Institute of Technology, estimated the risk of transmission on an Airbus 320 or Boeing 737 – two of the most commonly used planes.

He found the risk of catching the virus for a passenger in a window seat on a packed aircraft was one in 7,000.

But the odds drop to just one in 14,000 under the ‘middle seat empty’ policy, already adopted by some airlines in response to the Covid-19 pandemic.

Professor Barnett – whose work hasn’t been peer-reviewed by independent experts – claimed his findings show a ‘measurable reduction’ in transmission risk.

But he wrote: ‘The question is whether relinquishing one third of seating capacity is too high a price to pay for the added precaution.’

Professor Barnett added the chances of the virus spreading would ‘essentially drop to zero’ if there was a thin layer of plexiglass between seats. 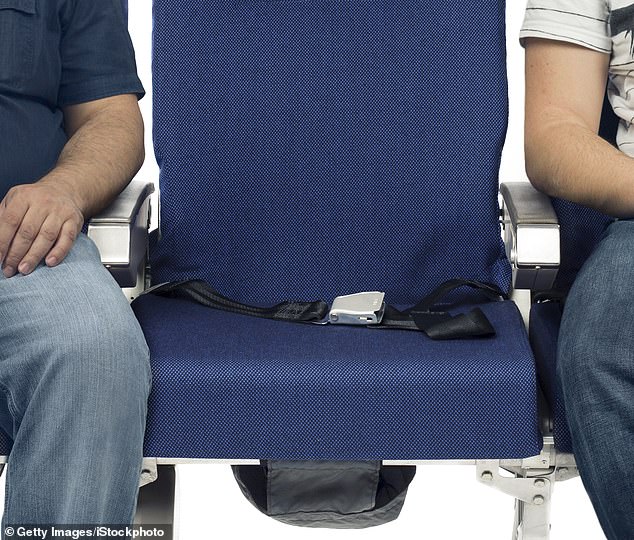 The risk of catching the virus for a passenger in a window seat on a packed aircraft was one in 7,000. But the odds drop to just one in 14,000 under the ‘middle seat empty’ policy, already adopted by some airlines in response to the Covid-19 pandemic

Professor Barnett, a renowned expert in the field of aviation safety and risk, admitted there were several flaws in his modelling.

He wrote in the study it was based on the ‘strong’ assumption travellers will only get infected by someone sitting in the same row as them.

This is ‘plausible’, he argued, because the air in the cabin is constantly refreshed and does not constitute a closed indoor space like a pub.

Professor Barnett also revealed the estimate did not consider the odds of passengers getting infected during boarding or when they leave the plane.

Travellers are known to congregate in larger groups in the gate waiting to board, and could come into contact with others when rushing to get off after landing.

And the model – not published in a medical journal – did not take into account how travellers may walk past contagious passengers on the way to the toilet.

DO SOME AIRLINES KEEP THE MIDDLE SEAT EMPTY?

… AND WHICH AIRLINES DON’T?

It also disregarded the potential chance of the virus being left on surfaces in toilets, which could then be picked-up by fellow travellers.

The research, published on pre-print website medRxiv, also assumed no passengers wore masks – proven to cut the risk of transmission by up to 80 per cent.

And the model – which said risks are lower in flights that aren’t full – didn’t take into account flight time.

For example, the study was based on a two-hour domestic flight across the US — but the risk may be higher if people are cooped up for longer.

Covid-19 is still a mysterious disease, with scientists baffled by its mechanisms since it was first spotted six months ago.

Under the risk of one in 14,000, it means approximately ten people will get infected for every 140,000 air travellers.

But many cases may not get spotted because some patients will show no symptoms — up to 40 per cent of infected people are thought to be asymptomatic.

Professor Barnett wrote: ‘Calculations like the ones here are highly approximate and projections about it often fall far of the mark.’

Airlines have been battered by the Covid-19 pandemic, with lockdowns around the world stopping people from taking flights to every corner of the planet.

Britain’s quarantine rules — before the air bridges were announced — sparked warnings that air travel would effectively be killed off.

British Airways has already confirmed 12,000 job cuts will still go ahead despite the government extending its furlough scheme until the end of October.

As the industry begins to pick up again, several airlines – including budget carrier Ryanair – have revealed they will fill all available seats on their flights.

The firm’s chief executive, Michael O’Leary, described keeping the middle seat empty ‘idiotic’ and said it would be unable to make any money adopting that policy.

But fellow low-cost airline easyJet has gone down the opposite path, announcing it would keep the middle seats empty to allow passengers to social distance.

It comes after a report last month warned Covid-19 outbreaks have been worse in areas with major airports and large numbers of travellers passing through them.

The Institute for Economics and Peace (IEP) said the spread of the disease, which has killed more than 50,000 people in Britain, was ‘highly correlated’ with air travel.

Cheerleader Accused of Murdering Newborn Admitted, 'I Didn’t Really Want to Have My Baby'