Whistle and FLUTE! Keir Starmer is pictured aged 18 with his school orchestra… as biography reveals the strait-laced teenager swapped his love for football to study music and even wore a SUIT at weekends

Four decades before becoming Labour leader, he was a talented young musician who played the flute, piano, recorder and violin as a child.

And a newly-unearthed photograph of Sir Keir Starmer showcasing his talent has now been revealed 41 years after being taken, when he was a young scholar at the Guildhall School of Music and Drama in London in 1980.

Sir Keir can be seen aged 18 holding his flute while dressed in a smart blazer, V-neck jumper and trousers as he smiles for the camera next to four other boys on board a lorry float promoting the Duke of Edinburgh’s Award.

The picture is in the forthcoming book ‘Keir Starmer – The Unauthorised Biography’, which is set to be released on July 8 by author Nigel Cawthorne, who attended the same grammar school as Sir Keir a few years before him.

The photograph emerged in The Sunday Times yesterday, which also revealed he traded football for flute lessons and wore his suit on on Saturdays – and plastered his room with posters of Blondie singer Debbie Harry. 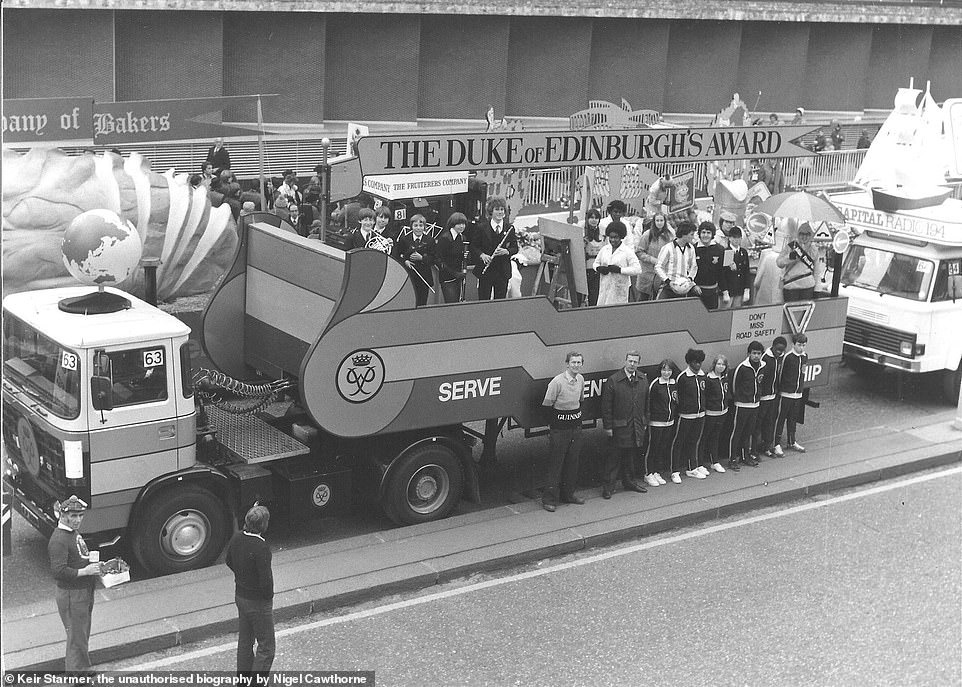 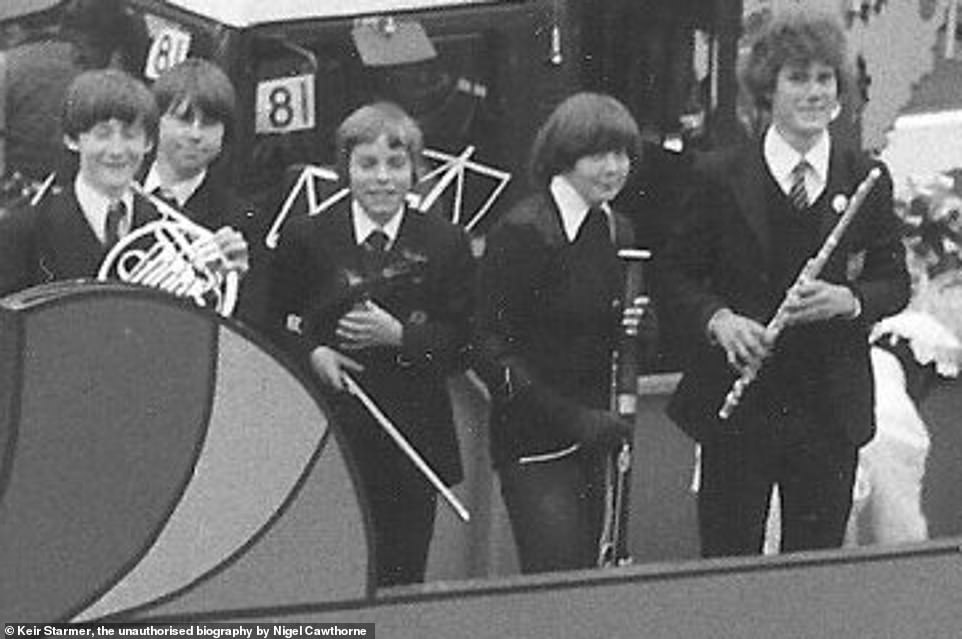 Sir Keir (right) can be seen holding his flute while dressed in a smart blazer, V-neck jumper and trousers as he smiles

The newspaper’s Whitehall correspondent Gabriel Pogrund also said of the book: ‘Some say Sir Keir Starmer is a little boring and a new book does nothing to disabuse his detractors of that impression.’

Speaking about music in 2015 to Primrose Hill magazine On The Hill, Sir Keir was asked about his interests outside work and said: ‘Music, classical music. I was a junior exhibitioner at the Guildhall School of Music till 18.

‘I played the flute, piano, recorder and violin. Then I realised at the age of 17-18 that the other people at the Guildhall were hugely talented, whereas I just practised hard.’ 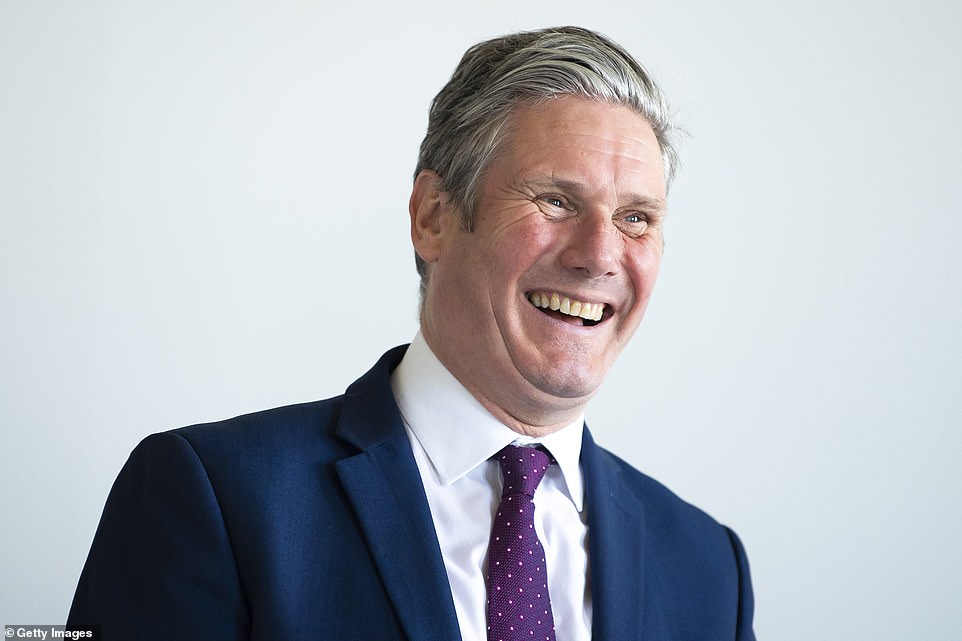 Sir Keir Starmer (pictured in Bristol on May 27) was a talented young musician who played the flute, piano, recorder and violin 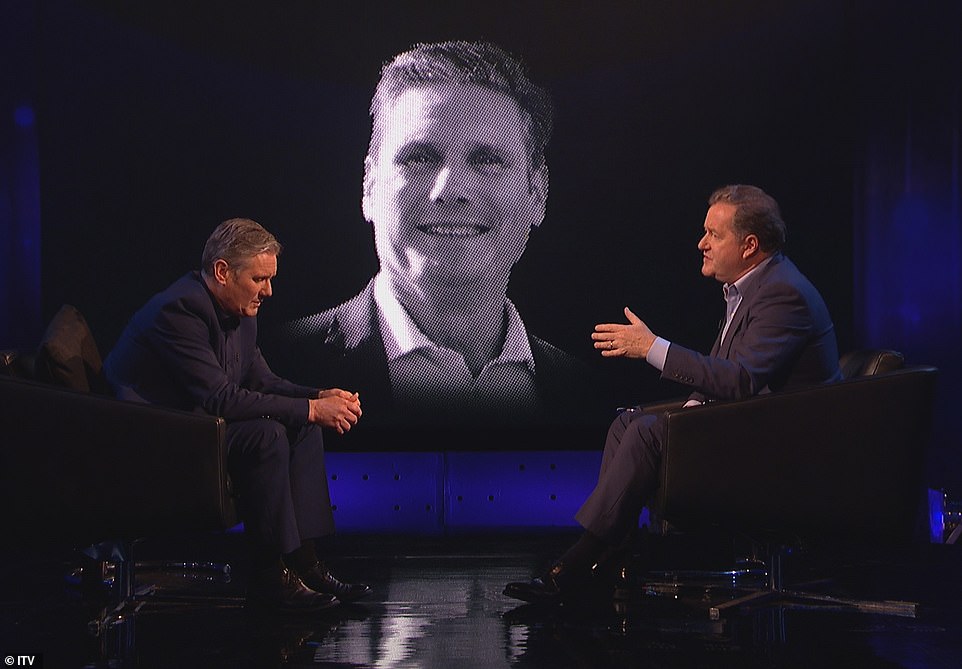 The book comes after Sir Keir was interviewed by Piers Morgan for his Life Stories series last week, during which he said he believes he is ‘turning the party around’ and Labour had to stop looking inwards to make inroads to electoral success.

A photograph of Sir Keir Starmer sporting what is now known as a ‘Meet Me At McDonald’s’ haircut was taken with three friends he lived with while studying at Leeds University in the early 1980s, it was revealed last week. 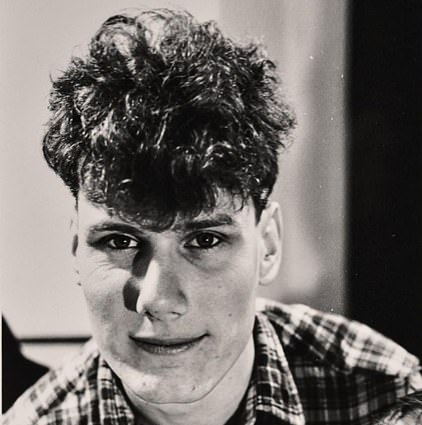 Details of the never-before-seen picture featuring Sir Keir emerged after Piers Morgan shared the picture of the politician in about 1982 sporting a New Romantic mop top and eyeliner ahead of his Life Stories interview.

In the throwback picture, the former barrister looks a world away from the slick suits and immaculately groomed hair most would associate him with today.

The hairstyle dubbed the ‘Meet Me At McDonald’s’ originated from a social media trend about six years ago which poked fun at ‘chavvy’ attire worn by teenagers who meet up at the fast food giant.

He was presented with the analysis of former prime minister Tony Blair, who said the party needed a ‘total deconstruction and reconstruction’.

And asked by Mr Morgan whether that was advice he needed to listen to, Sir Keir said: ‘Yes. The biggest change we need to make is a Labour Party that stops looking in on itself and looks out to the electorate, to the voters.

‘I’m going to go and talk across the country this summer to people who are no longer voting Labour and hear for myself what they have to say and show that reconnection.’

Sir Keir said the three things which would describe a Britain under his leadership would be ‘pride in our country, dignity… dignity for children growing up, dignity at work, and change’.

And he said already he was proud of his work to rid anti-Semitism from the party.

‘We had to make changes, so on things like anti-Semitism, it was really important to me and to the party, I think, to the country that we dealt with anti-Semitism,’ he said.

‘We’ve begun to do that, taken some really, really important steps. We’re turning the party around.’

In a second clip released ahead of the interview, he spoke about taking time out from his leadership campaign early last year to support his wife Victoria, suggesting it was an example of him putting his family before politics.

Asked whether he was a romantic, Sir Keir said: ‘I think probably yes.

‘You can buy flowers on someone’s birthday, you can do (that) on the traditional occasions, etcetera etcetera. That is good. That is fantastic. And so you should, and you’re not going to be forgiven if you don’t.

‘What matters is are you there when that person absolutely needs you? So, when Vic has needed me, I’ve tried to be there.’

In January 2020, Sir Keir cancelled leadership campaigning after his wife’s mother fell down the stairs, and subsequently died.

‘I took the decision to cancel the leadership campaigning and withdrew completely,’ he said.

‘I had to be there and try to do something I’d never done before which was to comfort someone who was going through grief.

‘I’d done it, my mum had died, I’d been through my version of that grief, but to see your wife go through it is deep.

‘That was hard, important, and for me that meant more than whether I bought flowers on this occasion or that occasion. The decision was obvious, I was never making a different decision. And Vic would do exactly the same for me.’

Keir Starmer – The Unauthorised Biography by Nigel Cawthorne, can be pre-ordered for £18 by clicking here