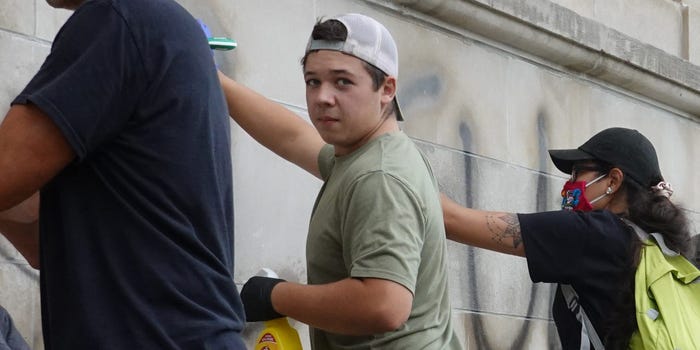 Kenosha shooter Kyle Rittenhouse says he used his COVID-19 stimulus money to pay for the gun he brought to the Wisconsin protest where he fatally shot two men and injured a third.

Rittenhouse, 17, gave his first jailhouse interview to the Washington Post, in which he said he had to "protect" himself at the August 24 anti-police-brutality demonstration where he he fatally shot protesters Joseph Rosenbaum and Anthony Huber, and injured protester Gaige Grosskreutz.

"I don't regret it. I feel I had to protect myself," he told The Post of bringing a gun to the protest. "I would have died that night if I didn't."

Rittenhouse told The Post that he used stimulus money he received as part of the government's CARES Act to pay for the gun he used in the shootings.

He didn't buy the gun himself — as a 17-year-old, he was too young to buy a rifle. Police say that Rittenhouse gave money to his 19-year-old friend Dominick Black to purchase the Smith & Wesson M&P 15 rifle from Ace Home Center on May 1.

Black has since been arrested on charges that he supplied Rittenhouse with the assault rifle.

Rittenhouse's lawyer did not immediately respond to Insider's request for comment.

An explosion heard in the vicinity of Syria's Damascus: State TV