Labour WILL call confidence vote in May if she loses crunch Commons Brexit showdown, says Keir Starmer – as he insists ‘no deal’ should NOT be an option in a second referendum

Labour will call a no-confidence vote in Theresa May if she loses the crunch Commons showdown over her Brexit deal, Sir Keir Starmer said today.

The shadow Brexit secretary confirmed the party will ‘inevitably’ try to collapse the government in the wake of what looks like a near-certain defeat in the Commons on December 11.

But Sir Keir also hinted that his favoured outcome is a second referendum – suggesting staying in the EU should be an option in the ballot, and no-deal Brexit should not be.

The frantic political manoeuvring comes as the PM fights desperately to salvage the package that she thrashed out with Brussels.

More than 100 Tory MPs have vowed to oppose the deal, along with Labour, the SNP and Lib Dems – putting her on course for catastrophic loss in the Commons crunch in nine days’ time. 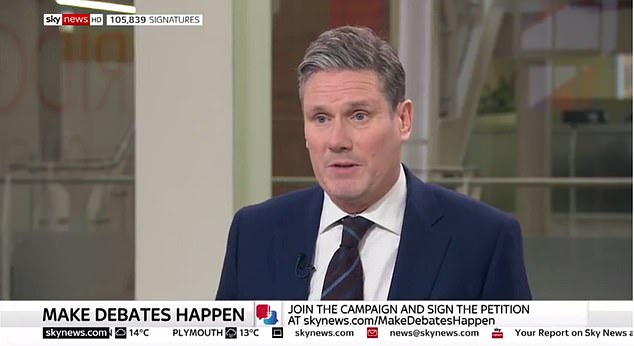 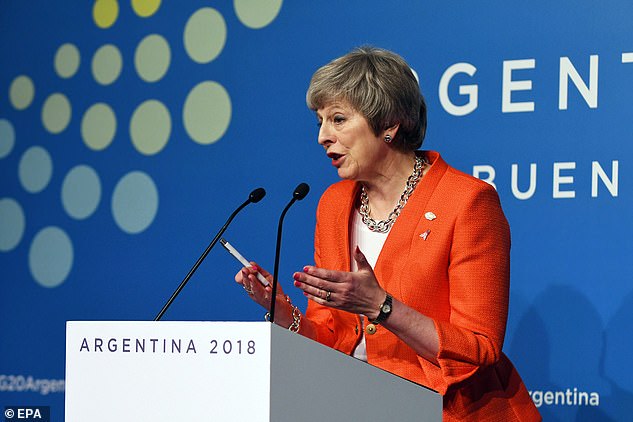 She again voiced defiance overnight, insisting MPs must act in the national interest and back her plan, or risk chaos that could result in no deal or no Brexit at all.

Speaking on Sky News’ Ridge on Sunday, Sir Keir said he expected a no-confidence motion would be tabled in the Commons if she loses on December 11.

‘It seems to me that if the Prime Minister has lost a vote of that sort of significance then there has to be a question of confidence in the Government,’ he said.

‘Because, but for the Fixed Term Parliaments Act, the convention was always if a Government loses what’s called a confidence vote – something of such significance – then that Government has to go.’

Sir Keir – who is thought to be among senior Labour figures pushing Jeremy Corbyn to endorse a second referendum – again appeared to play up the idea.

He insisted his view was that Remain should be an option in any ballot.

And he suggested crashing out of the EU without any deal should be off the table.

‘I would be worried about that,’ he said. ‘I think the option of no deal would be catastrophic for the country.’

What happens if Labour calls a confidence vote in the government?

Before 2010, losing a crucial vote like the looming one on the Brexit deal would itself have been enough to force an election.

But under the Fixed Term Parliaments Act, there are specific steps that need to be followed to send the country back to the polls outside the usual five year parliamentary term.

Otherwise, the government must first lose a motion stating explicitly that MPs have no confidence.

There is then a 14 day period in which another government can be formed – almost certainly led by a Tory – that can win a confidence vote.

Only if that time elapses will the starting pistol be fired on a general election campaign.

However, in a sign that Labour is just as divided on Brexit as the Tories, shadow trade secretary Barry Gardiner insisted both Remain and no deal should feature in any referendum re-run.

Demands for a second referendum are mounting after the dramatic resignation of universities minister Sam Gyimah over the weekend. He said he backed what campaigners have tried to brand a ‘People’s Vote’.

Sir Keir and deputy Labour leader Tom Watson are thought to be ramping up pressure on Mr Corbyn to back a fresh national ballot.

The party says its favoured option is for a general election – but has left the referendum is on the table if that is not possible.

Under the Fixed Term Parliaments Act, to force a general election Mrs May would need to lose a Commons confidence vote – but there would then be 14 days for the Tories to form another government and win a confidence vote.

Mrs May is facing a potentially catastrophic Brexit clash even before the crunch Brexit vote, as Tory rebels unite with the DUP and Labour to demand full legal advice on her deal is released.

She is fighting to limit the information disclosed about the opinion of Attorney General Geoffrey Cox on the package she has thrashed out with Brussels.

The eminent QC and strident Brexiteer was a key figure in forcing the deal through the Cabinet – but there are claims his formal advice was far bleaker and he warned the UK would be stuck ‘indefinitely’ in the Irish border backstop.

Mr Cox is due to make a statement to the Commons tomorrow setting out his position on the agreement with the EU.

But ministers have insisted they will only release a summary of his written advice as the full material would break convention and undermine the operation of government. 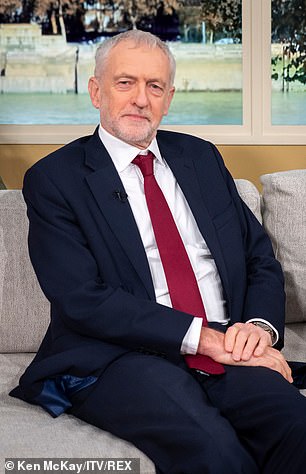 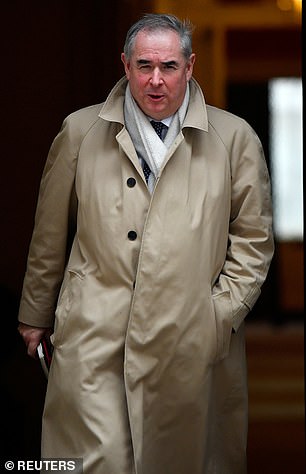 Labour has been demanding the release of the full legal advice from Attorney General Geoffrey Cox (right) on the Brexit deal. Jeremy Corbyn (pictured on the This Morning sofa last week) is under mounting pressure to back a second Brexit referendum

What might happen if May loses her meaningful vote on the deal?

Having finalised her Brexit deal, Theresa May now has to put it to the Commons – a vote almost everyone thinks she will lose.

What happens next on the road to Brexit is very hard to forecast – but amid the chaos there are a series of routes which politicians could take.

These are six scenarios for how Brexit might play out:

May renegotiates with Brussels and wins a second meaningful vote

This appears to be the Government’s current strategy. After MPs vote down the deal, the markets react with horror and Mrs May flies to Brussels to ask for help.

She either gets some new concessions or the EU says there really is nothing else.

Either way, Mrs May come back to the Commons and asks MPs to vote again – and wins as rebels back down in the face of no deal chaos and plunging markets.

Mrs May’s deal is defeated a second time in the Commons and Labour immediately calls a vote of confidence in the Government – which is lost.

Mrs May resigns as Prime Minister and is replaced in a quickfire Tory leadership contest. The winner is installed in No 10 but warned by the DUP the deal is still unacceptable.

Admitting there is no way to win a confidence vote and no renegotiation with Brussels, the new PM orders a second referendum on the deal or Brexit with no deal at all.

This would probably require the Prime Minister to delay Brexit by extending the Article 50 process.

Mrs May resigns immediately after her deal is rejected by the House of Commons for a second time. She stays on long enough in No 10 for a Tory leadership contest.

The new Prime Minister declares they want a mandate for their own version of Brexit and says they want a majority in the House of Commons to deliver it.

Labour seizes on the chance to go to the polls and Tory MPs reluctantly vote in the Commons for a snap election in late January or early February.

The Government is re-elected with a majority and passes its version of the deal.

After Mrs May’s deal is rejected by MPs, the Prime Minister insists the will of the Commons is clear and Brexit must be pursued without a deal.

She wins a confidence vote among all MPs and is able to cling to power while she drives the country toward exit day without a deal.

Labour demands an election but ignored by the PM, takes its earliest opportunity to table a motion in the Commons which condemns a no deal Brexit and calls for a new referendum on Brexit.

The motion passes – while it has no effect in law it changes the political mood dramatically. The Prime Minister says she cannot ignore the clear will of Parliament and starts the process of a new referendum.

After losing her deal in the Commons, Mrs May is replaced in a rapid leadership election. The new Tory Prime Minister immediately calls an election.

In the belief it can win by switching against Brexit, Labour changes its policy and puts a new referendum in its manifesto.

He immediately goes to Brussels, gets a six month extension to Article 50 and starts the process of calling a new referendum on a Remain or Leave with a new deal question.

The deal is defeated and after a no confidence vote, Remain MPs break party lines to back a new PM to form a national government that calls a referendum

Mrs May resigns amid chaos following a confidence vote – starting two weeks of limbo before a new election must be called in the absence of a Government.

In the vacuum, an MP calls on people across the Commons to break party lines and form a national government. The group forces a motion onto the floor of the House, possibly via the backbench business committee.

In a surprise result, the motion not only carries but has support of more than half of MPs – shifting the politics and prompting the new leader to be invited to form their national government.

The new Prime Minister calls a referendum with Remain, No Deal or May’s deal on the ballot paper – with a second round run off to decide the final settlement.

Covid positives higher in people returning from Portugal than in UK

Scots can meet in groups of 8 from tomorrow, Nicola Sturgeon says – ahead of Boris revealing his plan – The Sun