Free asymptomatic Covid testing may be scrapped by the end of August, meaning Britons could be forced to pay for kits from then.

One of the Government’s top health officials today told MPs ‘decisions will be made’ on whether to extend the public swabbing blitz past next month.

Ditching the near-£3billion scheme would mark a significant U-turn after the Government launched it with much fanfare just three months ago.

All adults in the UK are currently entitled to pick up two free testing kits a week, which can be collected from pharmacies or ordered online.

They are intended to be used by people when they do not show symptoms of Covid to pick up the estimated one in five cases that are asymptomatic and ensure people isolate.

But the kits have derided criticism for their inaccuracy, especially when self-administered. Department of Health data showed they produced more false than true positives in the first two weeks of mass testing at schools.

The Department of Health said anyone in England will be able to pick up a test until the end of August ‘at least’ but did not confirm if a decision to scrap the scheme had been made.

It said: ‘Further details on the provision of free rapid LFD testing will be set out in due course.’

Labour’s shadow health secretary Jonathan Ashworth slammed the proposal to introduce charges for tests at the same time cases are surging in the country. 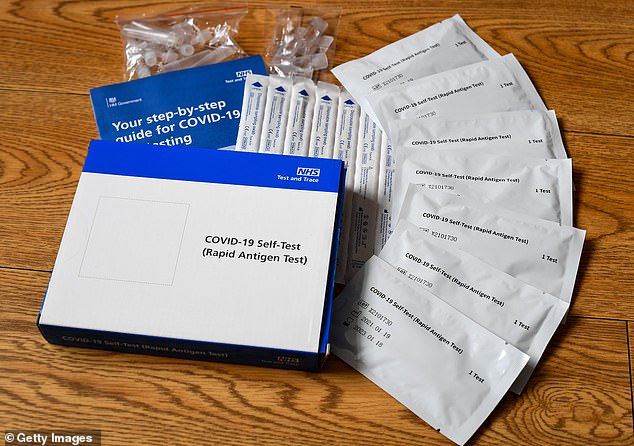 Free asymptomatic Covid testing may be scrapped by the end of August, health bosses revealed today 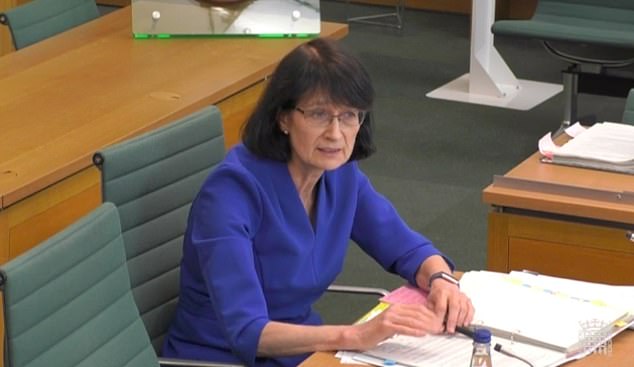 Dr Jenny Harries, chief executive of the Health Security Agency, told MPs ‘decisions will be made’ on whether to extend the two free lateral flow tests per week scheme past next month

Asked about whether the scheme will be extended past the end of August at the Public Accounts Committee today, Dr Jenny Harries, chief executive of the Health Security Agency, refused to rule out it being scrapped.

She said: ‘[We are] looking at whether it is an effective and essential public health intervention going forward. Nobody has discussed charging.’

Permanent Secretary at the Department of Health and Social Care Sir Chris Wormald added: ‘Let’s be absolutely clear on this point.

‘What we are doing is looking at the public health case for use going forward.’

Dr Harries confirmed free mass testing would continue as before in schools past August.

Following reports the scheme could be scrapped as early as the end of July, Mr Ashworth claimed the move to introduce charges ‘beggars belief’.

He said: ‘Sajid Javid’s policy of allowing infections to rise as high as 100,000 a day will see hundreds of thousands forced into self quarantine.

‘In that context ascend to lateral flow tests will be vital. It beggars belief that the health Secretary is introducing charging for testing.’

Mr Ashworth also told MailOnline: ‘And it means yet again those who are poorer are left to bear the brunt of the crisis. We should be making it easier to access testing not harder.’ 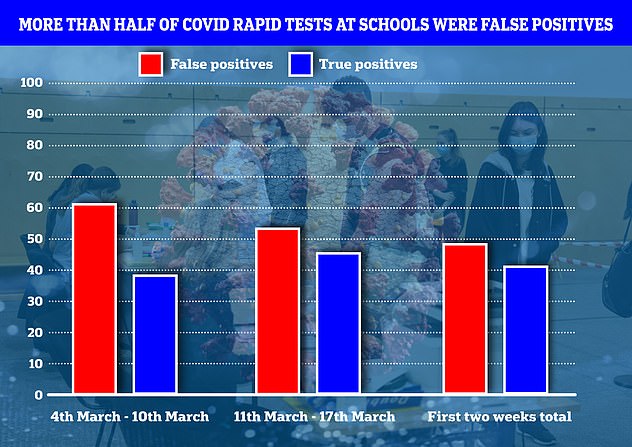 The scheme — a watered down version of No10’s ambitious ‘Operation Moonshot’ 10million-tests-a-day project — was launched on April 9.

Former Health Secretary Matt Hancock said at the time it would be ‘one of our most effective weapons in tackling this virus’.

Previously, the tests were only used routinely in schools, hospitals and care homes.

Ministers spent £2.8billion on hundreds of millions of the kits, which give a result in 30 minutes. They have been shown to miss infectious people up to 40 per cent of the time.

Numerous studies have shown the kits are far less accurate when self-administered – which is how they’re used across the UK.

Leaked Department of Health emails in April revealed senior officials feared they only pick up on 10 per cent of infections when done this way.

And Department of Health data showed six out of 10 positive rapid test results between March 4 and March 17 at schools turned out to be wrong when followed up by gold-standard PCR tests.

Out of 1,050 positive results, 605 were wrong, the official numbers showed — 58 per cent — meaning hundreds of children were kept out of classrooms for no reason.

Lateral flow tests are only accurate at diagnosing coronavirus when administered by trained professionals, studies have repeatedly shown.

The tests, which give results in as little as 15 minutes, use swabs of the nose or throat. Samples are then mixed in a testing liquid and put into a plastic cassette which can detect the presence or absence of coronavirus and then produce an image of a line, the same way as a pregnancy test, to indicate whether it is positive or negative.

The Department of Health and NHS are instructing people to use the tests on themselves, despite manufacturers of some kits saying they shouldn’t be used as DIY swabs.

Both the swabbing procedure and the use of the test cassette can easily be done wrong and affect the accuracy of the test.

If the swab isn’t done for long enough, or deep enough into the nose or throat, it may not pick up fragments of virus. Medical professionals are also able to use nasopharyngeal swabs, which go right to the back of the nostril, whereas this is not advised for people who test themselves.

And if the sample isn’t properly inserted into the cassette the result might be wrong, or people may misread the display when it produces a result.

A University of Oxford and Public Health England evaluation of the Innova lateral flow test, which is being widely used in the UK, found its sensitivity – the proportion of positive cases it detected – fell from 79 per cent to 58 per cent when it was used by untrained members of the public instead of lab experts.

Based on this evaluation, officials pushed ahead and used it for a real-world self-testing trial.

PILOT IN LIVERPOOL FOUND FEWER THAN HALF OF POSITIVES

When the same Innova test was trialled on members of the public in Liverpool – with people taking their own swabs and trained military staff operating the tests – the swabs picked up just 41 per cent of positive cases.

In the study the rapid tests detected 891 positive results, compared to lab-based PCR swabs that found 2,829 positives in the same group. This means 1,938 people got a wrong negative result from the rapid test.

The study didn’t compare this to professionally done rapid tests, but the manufacturer Innova claims its test is 95 per cent sensitive in lab conditions.

…BUT TESTING DONE BY MEDICS IN SLOVAKIA ‘REDUCED INFECTIONS’

Despite rapid lateral flow tests getting bad press, officials in Slovakia used them on 5.2million people – almost the entire population of 5.5m – in a trial that a study later estimated to have cut the country’s infection rate by 60 per cent.

The tests used were between 70 and 90 per cent accurate and all the swabs and evaluations were carried out by trained medical workers. They used deep nasopharyngeal swabs, that go to the back of the nose, whereas self-testing generally relies on a swab of only the nostril.

London School of Hygiene & Tropical Medicine researchers said that the scheme successfully weeded out coronavirus cases that wouldn’t have been found otherwise, slashing the number of cases by over half in a week during a lockdown.

HOW RAPID TESTS ARE DIFFERENT TO LAB-BASED PCR SWABS

Lateral flow tests are an alternative to the gold standard PCR test – known scientifically as polymerase chain reaction testing – which is more expensive and more labour-intensive but more accurate.

PCR tests also use a swab but this is then processed using high-tech laboratory equipment to analyse the genetic sequence of the sample to see if any of it matches the genes of coronavirus.

This is a much more long-winded and expensive process, involving multiple types of trained staff, and the analysis process can take hours, with the whole process from swab to someone receiving their result taking days.

It is significantly more accurate, however. In ideal conditions the tests are almost 100 per cent accurate at spotting the virus, although this may be more like 70 per cent in the real world.