The judge couldn't contain his displeasure.

A juror had researched online while the jury was deciding an accused man's fate, and the judge had no choice but to discharge the group and order a retrial in April last year.

"So two weeks wasted. All the time and effort that people have put into all this, all the stress that goes with it. It's scandalous really, but there it is," he told the jurors when they returned.

However, even this setback couldn't dampen the judge's devotion to what many consider the justice system's most sacred institution, having a group of strangers decide another person's fate in criminal proceedings.

"For what it's worth, I think juries are wonderful," the judge said.

"It's a very important civic duty to be involved in. I think jury verdicts – when they're delivered by 12 independent people who don't know each other from Adam, who bring all sorts of views from all walks of life, independently, dispassionately sitting here listening to a case and then collectively making a decision – are a very powerful thing." 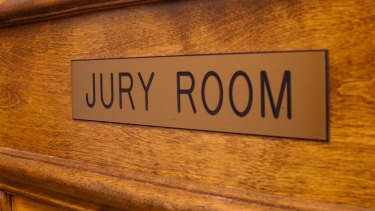 What happens inside jury deliberation rooms is kept secret by law.Credit:Alamy Stock Photo

Admiration of the jury system remains strong among the legal fraternity. The coronavirus pandemic forced the suspension of jury trials in March. They will return on Monday.

The Supreme and County courts have scheduled about 15 trials between now and Christmas. They will look different to safeguard against COVID-19, with video links playing a greater role. Proponents are celebrating their return.

"In Australia, juries are trusted and in the vast majority of cases they get it right," says Jacqui Horan, an associate professor of law at Monash University.

"Jurors go and do their jobs with incredible diligence and seriousness and having that group of 12, you get all sorts of opinions from all walks of life, and that means we get exceptionally good quality justice. It's an expensive way to do it but it's good quality."

Social distancing, masks and communicating with others on a screen are now commonplace in Victoria and future trials will feature the same.

Jurors will be selected via video links, witnesses will give evidence remotely and jurors will be socially distanced from each other. The County Court has extended jury boxes and the Supreme Court will seat jurors in the public gallery. Juries in both courts will be allocated an empty courtroom for breaks and deliberations. Media will cover most trials via video link.

Professor Horan expects some people called for jury duty to be reluctant to take part, particularly those who are older or have health problems, but says watching hearings online could allow other people – such as victims and their families – to watch without the stress of attending in person.

Barristers Nick Papas and Philip Dunn, QCs who have featured in hundreds of trials, say they can only think of a handful of trials they've witnessed or been involved in where a jury got a verdict wrong.

"The jury system is not perfect but what comes second is a long way behind," Mr Dunn says.

The suspension of jury trials means there is a backlog of about 1000 accused people awaiting trial, many in custody. Any accused can apply for a judge-only trial but despite long delays, most prefer to opt for a jury.

Victoria was the last state to allow judge-only trials, introduced in response to the pandemic in July. Other states have had the option for years, often using them in high-profile cases where prejudice could be an issue. The option will remain in post-pandemic Victoria.

Of the nine judge-only trials completed since July, the accused has been acquitted on their most serious charge every time. Despite that strike rate, barristers such as Mark Gumbleton prefer the odds of raising a reasonable doubt among 12 people rather than one.

"It comes back to numbers," Mr Gumbleton says.

"If you're running a trial in front of 12 judges – forget that they're members off the street – there's always going to be people who disagree, so let's say at the end they go into the room and six want to convict and six want to acquit, then you get that robust discussion.

"In front of a judge alone … you don't have the benefit of persuading some."

Jury decisions do get overturned on occasion. This year the High Court overruled a jury’s decision to convict George Pell of child sex abuse charges, and quashed his convictions on appeal.

Barristers say Cardinal Pell's case is an example of the system working – the checks and balances in place to safeguard against miscarriages of justice.

Mr Papas acknowledges the Pell case might diminish the role of juries in some eyes, but says it must be viewed in context.

"There's a risk that people will see that as being an attack on the jury system, whereas it's not," he says.

"What it's doing is providing a final safety valve for the jury system.

"I hope it doesn't diminish the importance and function of juries because I'm still a strong believer in the community judging its own peers."

Mr Gumbleton, however, expects the new landscape could produce challenges, such as witnesses appearing on a monitor rather than in the flesh.

"When the ability to interact in a human way is taken away it's going to be fascinating to see what the consequences are," he says.

"That said, the whole profession accepts we just have to get moving."

Mr Dunn agrees remote witnesses could be a challenge: "In my view, and I'm old fashioned, that's less than ideal. But let's get the system rolling again."