The Tokyo 2020 Olympics, as it (laughably) must still be called, hasn’t even had its opening ceremony yet, but already the competition has been fierce. And that’s just between rival media networks covering the event.

A flashpoint quickly emerged over the International Olympic Committee announcement awarding the 2032 Games. You see, Seven scored the official broadcast rights for the Tokyo Olympics in a $170 million package deal that also included the rights to broadcast the Winter Olympics in Beijing next year. 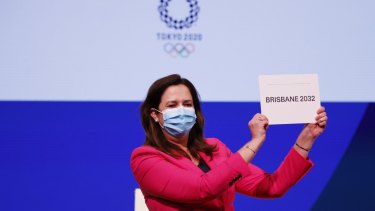 Annastacia Palaszczuk makes perfectly clear where the 2032 Summer Olympics will be held.Credit:Getty Images

The fuss was caused when the Australian Olympic Committee said the announcement handing the Games to Brisbane was going to be exclusive to the Seven Network.

Readers of a certain vintage (which might also include your columnists) will know precisely where they were when they heard the 4.27am announcement on September 24, 1993, by Juan Antonio Samaranch, “And the winner is Syd-en-ney.” It prompted then NSW premier John Fahey to jump for joy at a ceremony in Monaco that was beamed live around the world.

For the Brisbane announcement, answering where we were is easy: in lockdown.

But we digress. The Brisbane announcement was an IOC event but wasn’t at an Olympic venue, so restrictions did not apply. Spirited lobbying by rival networks including Nine, the owner of this masthead, led to the AOC changing tack and telling networks they could all carry the announcement live.

Common sense prevailed in the rarest of sporting occurrences. A draw where everyone was a winner – particularly Queensland Premier Annastacia “Party of One” Palaszczuk, who managed to leap out of her chair, albeit in a way that looked half-hearted.

Vaccine apartheid has reared its ugly head in the most unlikely of places: the federal parliamentary press gallery. It was at The Lodge on Wednesday when the right of journalists to grill Scott Morrison ran up against public health orders.

The PM is in iso at The Lodge after flying in from the Sydney red zone, in preparation for the next parliamentary sitting week. He’s keen to have his boots on the ground in the chamber and to avoid being a TV talking head. More authority that way.

But things got tricky on Wednesday morning when a new directive from the Prime Minister’s media team landed in journos’ mailboxes. Instructions went out from the PM’s office that any attending media at an outdoor press conference at The Lodge had to wear masks, check in with a QR code, be punctual and, oh, must be fully vaccinated.

Come again? A tall order when the bulk of the gallery are under 40 and are still waiting for slots to get their jabs. So who would come up with such an unrealistic rule? Perhaps it has something to do with the fact a high proportion of the Prime Minister’s Office has been vaccinated – a factoid the wonks in PMO like to downplay. Some staffers under 40 have received the AstraZeneca vaccine. Others received the Pfizer shot before accompanying the PM on his trip to the UK for the G7 summit and a side trip to the Cornish town of St Keverne.

Press gallery president David Crowe lobbied for prime ministerial media man Andrew Carswell to reverse the ban. It didn’t take long. A follow-up memo went around saying full vaccination was preferred. “But if your outlet doesn’t have someone; one person can still attend – noting the minimal health risk is further mitigated for those in contact with the PM if they are fully vaccinated.” 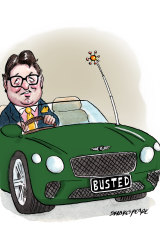 It’s been a quiet patch for self-proclaimed investment guru Michael Kodari. But the Warren Buffett-wannabe can only fly under the radar for so long. A police report shows that nothing can stop Kodari’s rapacious headline generating abilities – not even the pandemic. Officers slapped the 35-year-old with a $1000 penalty infringement notice on Friday night for breaching stay-at-home orders at a party held at his North Sydney offices.

A clipped police report detailed the scene: “Police responded to reports of a party occurring at a business premises. Officers … attended and found 10 people having a dinner party after work,” a police spokesman said.

“Police issued each of the co-owners – a 35-year-old man and 30-year-old woman – with a $1000 PIN before all people were escorted off the premises.”

It’s just too bad that Kodari – real name Yashar Kodari – wasn’t prepared to comment. It’s worth asking how he thought he would get away with it. After all, it’s common knowledge he’s useless at being inconspicuous.

SPOTTED: On Sunday, before the proverbial hit the fan over accusations of China’s involvement in a cyberattack, the deputy head of mission for the People’s Republic of China embassy in Australia, Wang Xining. He was seen tearing along the picturesque Camel’s Hump track in the ACT. Seemed in pretty good shape, witnesses said.

More than 2,600 medical workers infected with coronavirus in Italy