Anglican priest Alan Jones is normally a Coalition voter. But he’s not keen on how Opposition Leader Michael O’Brien has performed during the pandemic. 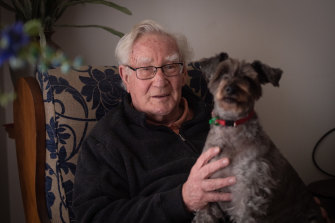 Mr O'Brien's rhetoric has become harsher in recently weeks, with the opposition moving an unsuccessful no-confidence motion against Premier Daniel Andrews, accusing the Labor government of “failures, cover-ups and lies”. Mr O'Brien has also called for Mr Andrews to resign and demanded that restrictions be eased faster.

It's well known that crises favour incumbent leaders. Oppositions often struggle, with communities looking for leadership rather than partisanship. Even so, the Ipsos poll commissioned by The Age and Nine News is a blow to Mr O'Brien, who has faced some leadership speculation as the party has tried to work out how to respond to the politics of the pandemic.

The results show that many Victorians believe the opposition has played politics, rather than offered constructive criticism or support.

Father Jones says the pandemic was a missed opportunity for political parties to work together.

“Given what we’re up against it would have been great if all the political parties said ‘OK, let’s go together,” Father Jones says.

“The important thing was that the community had to have a change of direction thrust on them, and our only leaders in that situation are the politicians. If they could work together, I think they could reach more people with a more convincing message.”

The Ipsos poll found that just 15 per cent approve of Mr O'Brien's performance, 39 per cent disapprove and the rest say they either don’t know or neither approve nor disapprove.

Even among Coalition voters, Mr O’Brien’s approval was just 27 per cent. Victorians were also critical of how the opposition had responded to the pandemic with 16 per cent satisfied and 44 per cent dissatisfied. 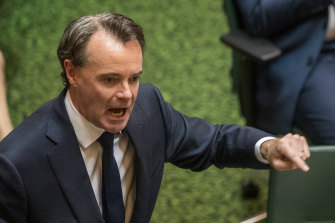 Michael O’Brien haranguing the Premier in Parliament this month.Credit:Jason South

Paul Strangio, an associate professor of politics at Monash University, said the dire polling for Mr O'Brien suggests that the Victorian community has reacted negatively to perceived attempts to politicise the crisis.

Dr Nick Economou, a senior lecturer in politics at Monash University, says incumbent leaders across Australia and the globe have enjoyed strong levels of approval during the pandemic.

“When there’s a crisis and you are the Opposition Leader it’s very hard to get traction.”

The Victorian Parliament had hardly met this year due to COVID-19, which denied Mr O’Brien a platform.

Ipsos director Jessica Elgood says while it was an underwhelming result for Mr O’Brien, the latest NSW Ipsos poll revealed a similar trend.

“It’s really hard for opposition leaders to make headway,” Ms Elgood said. “They don’t want to be seen to undermine the collective effort to repel the pandemic but at the same time they want to hold the government to account.

Marina Perera, a 69-year-old retiree from Eltham who was surveyed in the Ipsos poll, normally votes for the Coalition in both state and federal elections.

She is not happy with Mr Andrews, saying she is frustrated by how slowly he has moved to reopen the economy. But she is also displeased with Mr O’Brien.

“He seems to be just criticising Dan Andrews in everything he does. He doesn’t have a plan, he just says ‘this is wrong, this is wrong’. That is not how an opposition leader should be performing, he should be giving constructive criticism," she said.

Another Coalition voter who was polled, Paul Dzamko, 66 from Williamstown, said Mr O’Brien had been “purely negative”.

“People are looking for excuses or reasons not to follow the rules. I think what they have been trying to do has not helped the situation."

“The opposition has pointed out things that have been stuffed up by the government, where the government has not been willing to accept any responsibility for what they’ve done.”