A security company involved in Melbourne's deadly hotel quarantine outbreak has had its licence renewed by Victoria Police after being allowed to continue operating on an expired security licence for the past six months.

Unified Security Group was granted a three-year extension on December 26 by Victoria Police's Licensing and Regulation Division, after submitting its renewal application a day after its licence expired on June 21 last year. 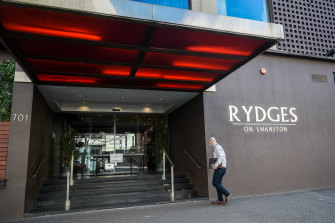 Unified Security provided guards at hotels including Rydges on Swanston, the source of the most significant outbreak from hotel quarantine.Credit:Justin McManus

No new conditions were placed on Unified Security Group, whose guards were employed at 13 quarantine hotels and helped seed the second wave of COVID-19 in June last year, The Age has confirmed.

The leeway extended to the company has rankled some rival businesses, who claim Unified Security Group should have been required to change some of its business practices before receiving the extension.

A spokesman for Unified Security said the company had only become aware of the renewal in the past week, when the Licensing and Regulation Division updated its website.

The spokesman said the decision reflected the company's "full compliance with the high level of regulation and expectation that all security companies operating in Victoria are required to meet".

"The renewal of our license is in no way surprising and shows that Victoria Police recognises Unified Security as a responsible, capable operator that fully adheres to all of our compliance requirements," the spokesman said.

Of the three companies contracted by the state government to supply security guards during hotel quarantine, Unified Security was handed the bulk of the security contracts, including at the Rydges on Swanston, which was the source of the most significant outbreak.

Unified Security received more than $30 million in contracts between late March and July, earning it far more than rivals MSS and Wilson Security, even though Unified was the only one of the three not on the government's panel of pre-approved security suppliers.

The company also faced the most intense scrutiny during the hotel quarantine inquiry led by former judge Jennifer Coate. 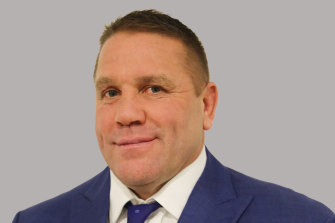 Mr Millward told The Age that police and Australian Defence Force personnel would have been just as vulnerable as security guards had they been employed in the program that was set up and overseen by Victoria's Department of Health and Human Services.

"The clear evidence from the hotel quarantine inquiry is that the primary cause of the outbreak was the appalling lack of infection-control protocols in the hotels and the confused and ineffective governance structure that meant no one knew who was in charge,” he said.

When handing down her findings in December, Ms Coate was unable to pinpoint who made the fateful decision to use private security guards, which she described as "an orphan, with no person or department claiming responsibility".

She also found the process used by the Department of Jobs, Precincts and Regions to appoint private security firms was "not appropriate or sufficiently rigorous".

"It was made in haste and without any risk assessment, led by staff that did not have the requisite experience and knowledge, and without any public health oversight or input."

A Victoria Police spokeswoman said the Licensing and Regulation Division regularly assessed the suitability of individuals and businesses to hold private security licences and registrations.

“Victoria Police also undertakes a range of compliance and enforcement activities to ensure those with security licences are complying with the conditions of their licence,” the spokeswoman said.

Kanye West Refuses To Deny His 2020 Presidential Campaign Is A Spoiler To Stop Biden Win: ‘Jesus Is King’

One in three American renters didn’t pay ANYTHING in April as experts warn 1.5 million could be pushed to homelessness – The Sun