Last June, the Lincoln Project was on a high.

The group tried to claim a higher moral ground in an effort to purge Trump from the GOP. Money flowed in by the tens of millions of dollars from donors eager to help.

But within the organization, a grave threat was emerging.

In June 2020, members of the organization’s leadership were informed in writing and in subsequent phone calls of at least 10 specific allegations of harassment against co-founder John Weaver, including two involving Lincoln Project employees, according to multiple people with direct knowledge of the situation.

The email and phone calls raise questions about the Lincoln Project’s statement last month that it was ‘shocked’ when accusations surfaced publicly this year. It’s also the first known suggestion that Weaver targeted a Lincoln Project staffer.

Despite the early warning, the group took no action against Weaver and pressed forward with its high-profile work.

For the collection of GOP consultants and former officials, being anti-Trump was becoming very good for business. Of the $90 million Lincoln Project has raised, more than $50 million has gone to firms controlled by the group’s leaders. 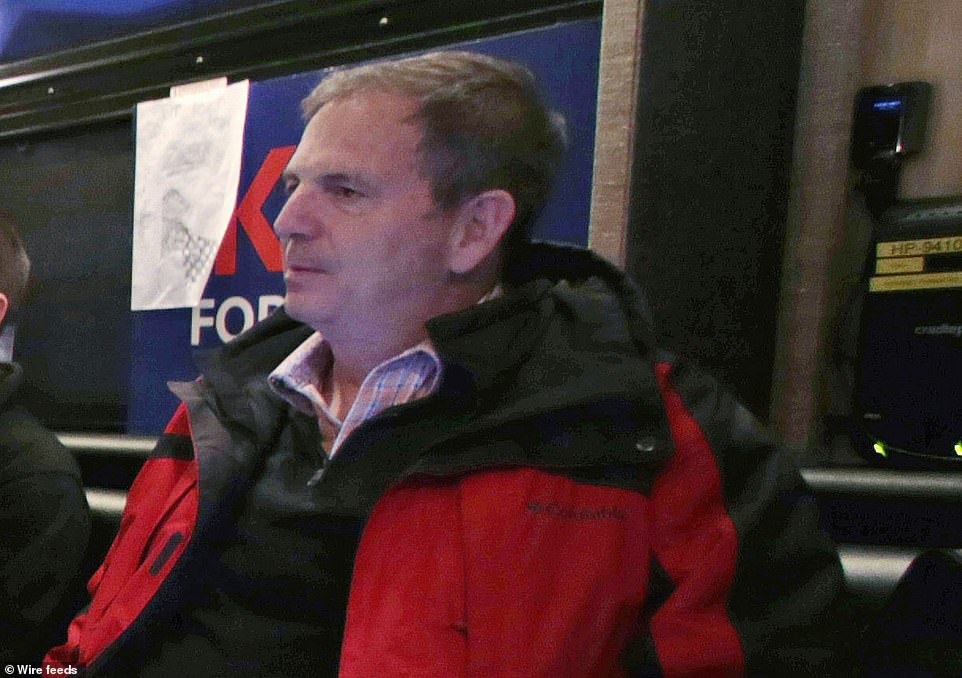 Accused predator: John Weaver is alleged to have targeted a 14-year-old boy and two members of the Lincoln Project’s own staff – with its leaders warned in June 2020 but dong nothing then saying they were ‘shocked’ when revelations emerged publicly in January 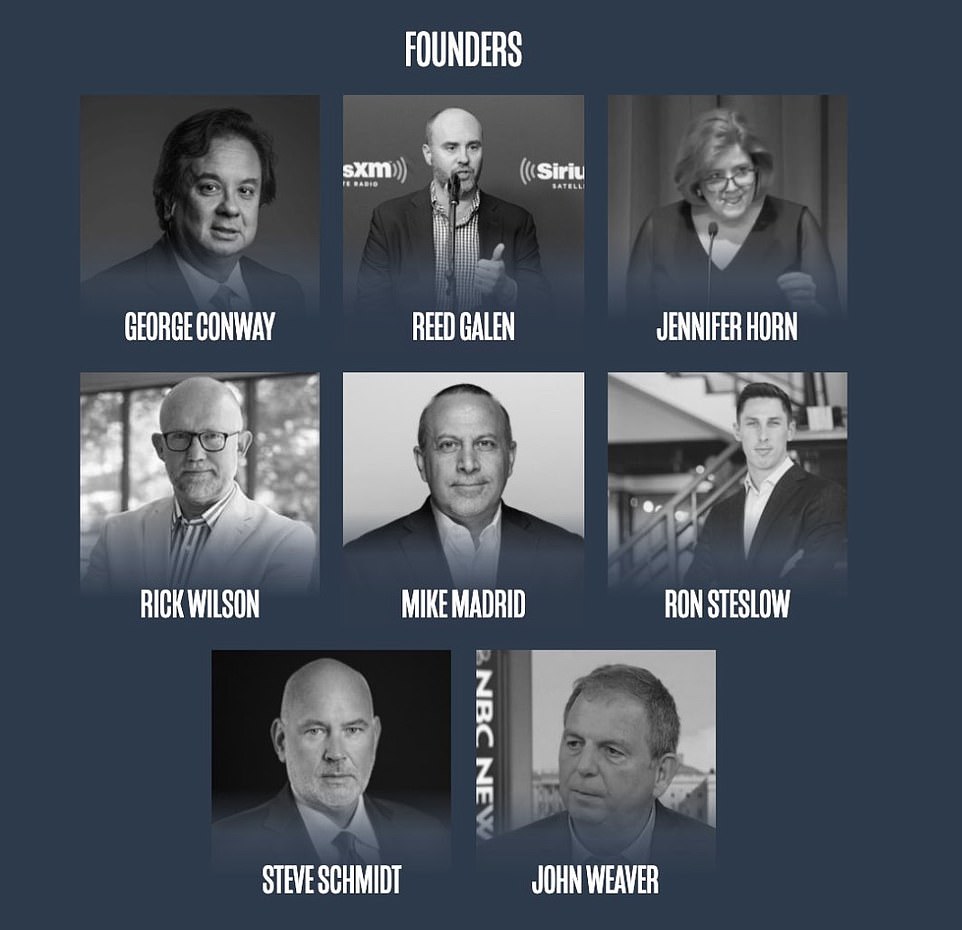 Who’s who of Republican names: The Associated Press revealed that $27 million was paid to a small firm controlled by Galen and another $21 million paid to a firm run by Ron Steslow. Steve Schmidt received then repaid $1.5 million. The Lincoln Project parted with Jennifer Horn, last week, claiming in an unusual public statement that she was seeking a $250,000 signing bonus and a $40,000-a-month consulting contract. Horn said that she left following revelations of Weaver’s ‘grotesque’ behavior and divergent views with existing leadership about how to move forward. 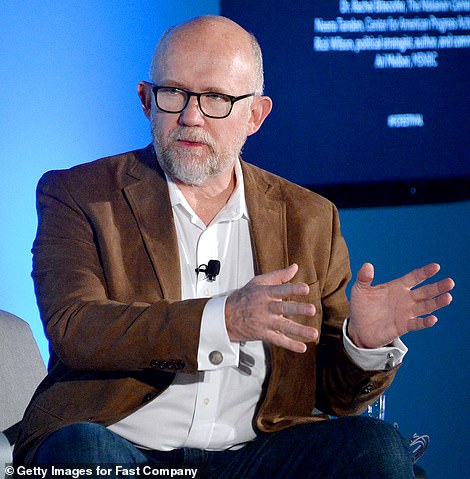 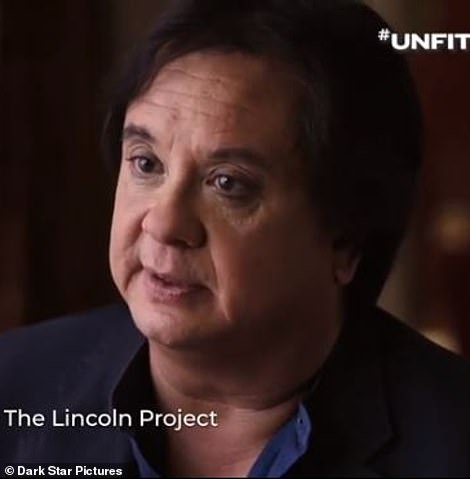 Big names: Rick Wilson is a longtime Florida Republican operative while George Conway’s wife Kellyanne’s role as a top Trump aide made their marriage a source of fascination. Their daughter Claudia is now a Tiktok star and auditioning for American Idol 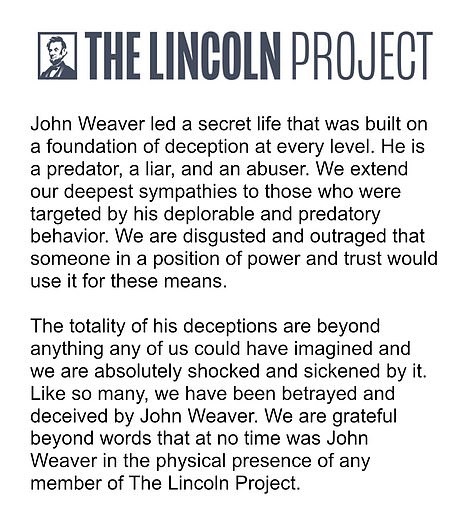 What they said in January: The Lincoln Project’s statement is now in questions over revelations members of its leadership were warned about Weaver

There is no evidence that the Lincoln Project buried the allegations against Weaver for business reasons. But taken together, the harassment allegations and new revelations about spending practices raise significant questions about the management of one of the highest-profile antagonists of Trump.

The revelations threaten the stature of not just the Lincoln Project but the broader coalition of establishment-oriented Republican groups hoping to pool their resources to excise Trump from the party.

Lincoln Project co-founder Steve Schmidt insisted that he and the rest of the group’s leadership were not aware of any internal allegations of wrongdoing involving Weaver.

‘No Lincoln Project employee, intern, or contractors ever made an allegation of inappropriate communication about John Weaver that would have triggered an investigation by HR or by an outside employment counsel,’ Schmidt said. ‘In other words, no human being ever made an allegation about any inappropriate sexualized communications about John Weaver ever.’

Weaver declined to comment for this story, but in a statement released late last month to Axios he generally acknowledged misconduct and apologized.

‘To the men I made uncomfortable through my messages that I viewed as consensual mutual conversations at the time: I am truly sorry,’ he wrote. ‘They were inappropriate and it was because of my failings that this discomfort was brought on you.’

The Lincoln Project launched in November 2019 as a super PAC that allowed its leaders to raise and spend unlimited sums of money. 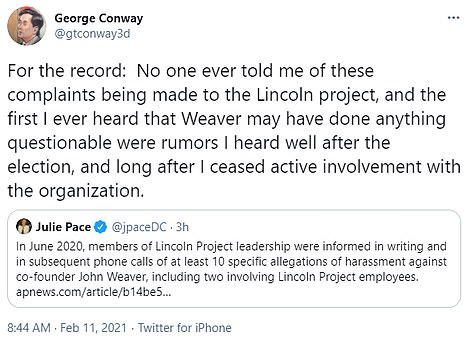 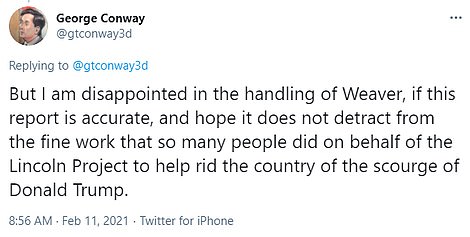 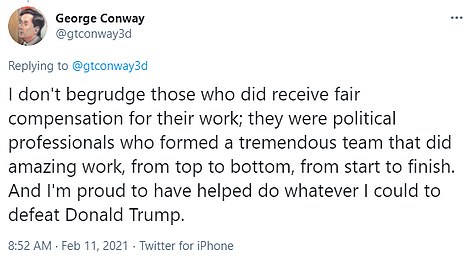 Response: George Conway said he had not received any payment and was unaware of harassment allegations against John Weaver, one of the other co-founders

Backed by its founders’ commanding social media presence, the organization quickly attracted a massive following of Trump critics in both parties that exceeded even its own founders’ expectations.

Since its creation, the Lincoln Project has raised $90 million.

But only about a third of the money, roughly $27 million, directly paid for advertisements that aired on broadcast and cable, or appeared online, during the 2020 campaign, according to an analysis of campaign finance disclosures and data from the ad tracking firm Kantar/CMAG.

That leaves tens of millions of dollars that went toward expenses like production costs, overhead – and exorbitant consulting fees collected by members of the group.

‘It raises questions about where the rest of the money ultimately went,’ said Brendan Fischer, an attorney with the nonpartisan Campaign Legal Center in Washington. ‘Generally speaking, you’d expect to see a major super PAC spend a majority or more of their money on advertisements and that’s not what happened here.’

But in many cases it’s difficult to tell how much members of the group were paid. That’s because the Lincoln Project adopted a strategy, much like the Trump campaign they criticized, to mask how much money they earned.

While several firms did collect payments, Weaver and Wilson are not listed in publicly available records. They were likely paid as subcontractors to those firms, an arrangement that avoids disclosure.

Schmidt collected a $1.5 million payment in December but quickly returned it.

‘We fully comply with the law,’ Schmidt said. ‘The Lincoln Project will be delighted to open its books for audit immediately after the Trump campaign and all affiliated super PACs do so, explaining the cash flow of the nearly $700 million that flowed through their organizations controlled by Brad Parscale and Jared Kushner.’

The Lincoln Project parted with one co-founder, Horn, last week, claiming in an unusual public statement that she was seeking a $250,000 signing bonus and a $40,000-a-month consulting contract. Horn said that she left following revelations of Weaver’s ‘grotesque’ behavior and divergent views with existing leadership about how to move forward.

Public records reveal that the unexpected success of the Lincoln Project has extended a lifeline to some founders who have spent much of the past decade under financial distress.

Over the past decade, Weaver has repeatedly failed to pay taxes, defaulted on loans and faced lawsuits from creditors seeking to collect. In October, he paid off $313,000 in back taxes owed to the IRS dating back to 2011, records show.

A separate case in Texas is still pending over $340,000 back rent his family owes after shuttering a children’s boutique they operated, records show.

Others used the money earned during their time with Lincoln Project to refinance homes, or purchase a new one.

Schmidt purchased a $1.4 million ‘Mountain Modern’ custom home in Kamas, Utah, with five bedrooms, seven baths and a ‘stunning’ view of the Uinta Mountains, according to property records and real estate listings. He is currently trying to resell the home for $2.9 million.

But as money flowed into the group, multiple people with direct knowledge said allegations against Weaver were repeatedly raised inside the organization, long before leaders acknowledged them publicly in late January. Those with knowledge insisted on anonymity in order to disclose private communications.

Last June, someone working for the Lincoln Project payroll sent an email to Steslow, one of the organization’s co-founders, detailing numerous cases of sexual harassment involving Weaver that spanned several years. While the AP has not seen the email, its contents were confirmed by four people who had directly seen it.

Schmidt did not confirm the existence of the email, saying only that if one existed, it was not shared with anyone on the organization’s board or leadership.

But multiple people familiar with the situation say that Steslow immediately raised the email with Galen, who helped manage day-to-day operations at the time, and the Lincoln Project’s corporate counsel Matthew Sanderson. Steslow also encouraged his colleagues to remove Weaver from the organization.

Those allegations and others were discussed on subsequent phone calls with organization leaders in June and August, and employees were assured that the alleged incidents would be investigated. Weaver went out on medical leave in August, but as the presidential campaign moved into the summer and fall, there was no formal resolution.

The Washington Blade reported earlier this week details of another set of internal communications over the summer indicating that Lincoln Project leaders were aware of allegations against Weaver and preparing to respond to media reports.

The allegations against Weaver followed a similar pattern in which the 61-year-old married father of two would allegedly send private messages to young gay men on Twitter. They often began with references to work before shifting to things like their personal appearance, workout routines and favorite sexual positions.

At least two Lincoln Project employees were targeted last year, including an intern who was finishing law school, and a communications staffer. There is no allegation of physical contact.

An unrelated group known as the Republican Accountability Project this week is running television ads across 19 states pressuring 22 Republican senators to vote to ‘convict and disqualify’ Trump in the ongoing impeachment trial. The group has also launched a $1 million billboard campaign calling for the resignation of key Trump allies who voted to block the certification of the election results.

One of the Republicans targeted in the billboard attack, Rep. Elise Stefanik, R-N.Y., falsely conflated the groups in a fiery response through an adviser.

‘The Never-Trump movement is doing all they can to distract the press from their massive sexual abuse and harassment scandal,’ Stefanik adviser Alex DeGrasse said. He called the billboard campaign ‘next-level desperation.’

'Jen Aniston should be killed': New court documents show how Harvey Weinstein lashed out as the walls were closing in