LINFORD Christie has accused the Met Police of “institutionalised racism” after two of his athletes were detained in handcuffs outside their home yesterday.

The former 100m Olympic champion tweeted a furious message demanding answers after the unnamed couple were stopped along with their three-month-old baby. 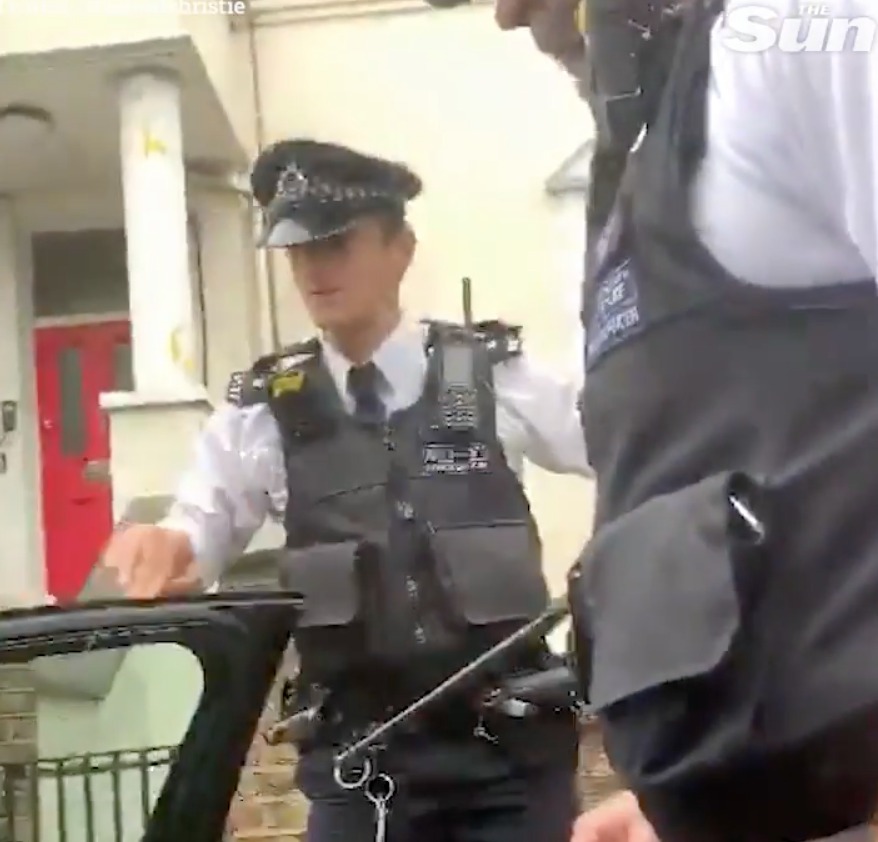 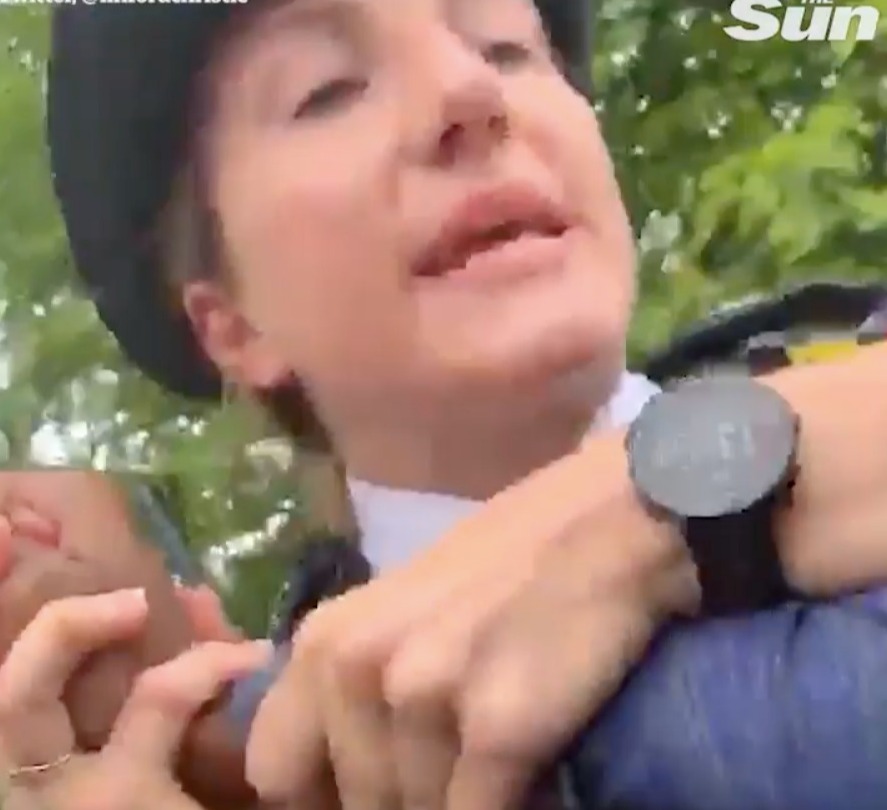 Footage of the incident showed the pair being pulled from their car in broad daylight by at least three police officers in West London.

One of the cops can be heard saying they are searching the car “for weapons”.

Met Police said in a statement that they stopped a car which had sped away from officers travelling on the wrong side of the road.

Yesterday, Linford addressed a message on Twitter to Met Police Commissioner Cressida Dick alleging that the male driver had been “assaulted” by cops and that officers had taken “a mother away from her baby.”

He wrote: “Two of my athletes were stopped by the police today, both international athletes, both parents of a three-month-old baby who was with them and both handcuffed outside of their home.

“Can Cressida Dick or anyone please explain to me what justification the Met Police officers had in assaulting the driver, taking a mother away from her baby all without one piece of PPE and then calling the sniffer dog unit to check the car over.

“Was it the car that was suspicious or the black family in it which led to such a violent confrontation and finally an accusation of the car smelling of weed but refusing to do a roadside drug test.

“This is not the the first time this has happened. (second time in two months) And I’m sure it won’t be the last but this type of abuse of power and institutionalised racism cannot be justified or normalised any longer.” 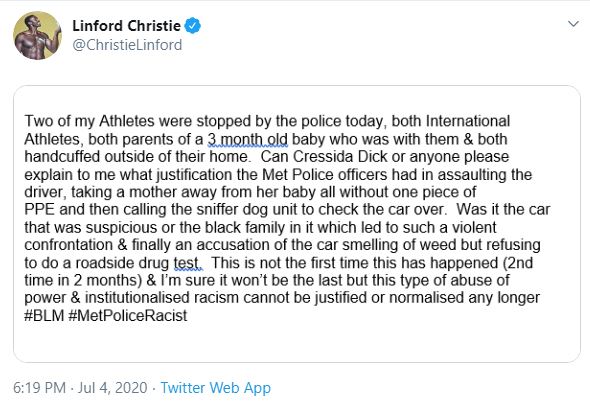 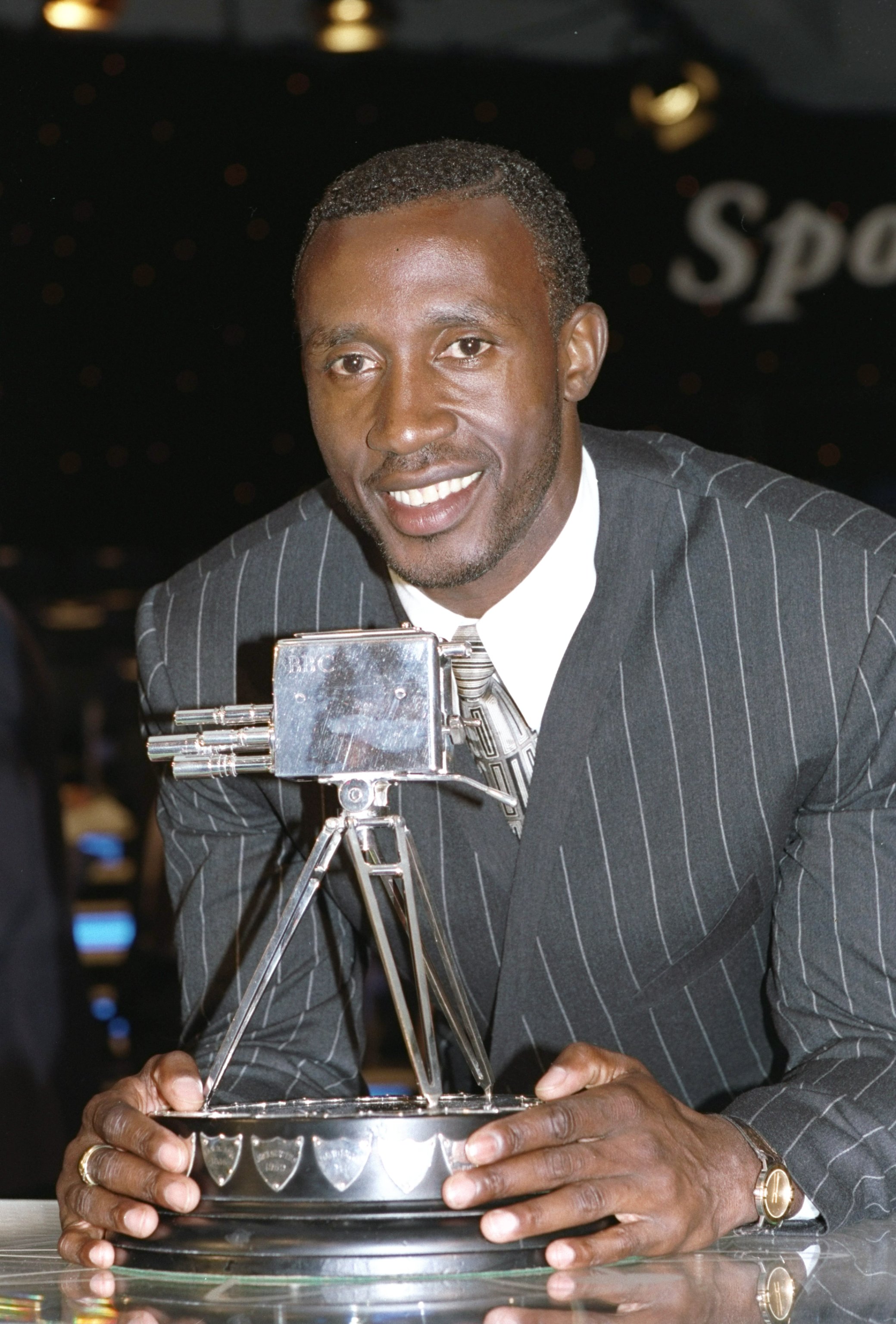 The Metropolitan Police responded saying a 25-year-old man and a 26-year-old woman were detained but not arrests were made following the search.

They said: “At around 1325 on 04/07/2020, officers from the Territorial Support Group were patrolling in the W9 area in response to an increase in youth violence involving weapons.

“A vehicle with blacked out windows made off at speed from the officers, travelling the wrong side of the road. The officers eventually caught up with the vehicle which was stopped in LANHILL ROAD W9. The driver initially refused to get out of the vehicle.

“The occupants, a 25 year-old man and a 26-year-old woman, were informed that they were being detained for the purposes of a search under Section 1 of the Police and Criminal Evidence Act 1984.

“After a search was conducted on the persons/ vehicle, no arrests were made and the occupants were allowed on their way.

“Each stop is dealt with on its own merits at the discretion of the individual officers involved taking into account various aspects including behaviour and compliance.

“Officers have to make these judgement calls regularly on a daily basis, often in difficult circumstances.

“They understand that their actions will be scrutinised as they go about their work and that the public have the right to hold them to account where appropriate.

“In this instance, officers from the Directorate of Professional Standards Unit have reviewed both footage from social media & the body-worn video of the officers on scene, and are satisfied that there is no concern around the conduct of officers.”

Devastated friends pay tribute to ‘warm and loving’ teenager, 18, who was ‘murdered with her mum, 40, by her dad’ – The Sun