London is now the COVID capital of England: Experts warn it is inevitable city will go into toughest Tier Three before Christmas – as new UK-wide coronavirus cases rise 40% from last week to 20,694 and daily deaths increase to 516

London looks set to be plunged into a Tier 3 lockdown within days after official data revealed the capital was now England’s new coronavirus hotspot with more cases per person than any other region.

The case rate per 100,000 people in the capital stood at 191.8 on December 6, up from 158.1 in the previous week, according to Public Health England data published today.

And it comes as the Department of Health today announced a spike in infections across the country, with the UK recording another 20,694 positive tests, which was up from 16,578 yesterday and 39 per cent more than last Thursday. In the same announcement another 516 deaths were confirmed.

A shake-up of the current Tier system is due to happen on December 16, when infection, hospital and death rates will be reviewed to decide whether to tighten or loosen curbs across the country.

Professor Paul Hunter, a top epidemiologist at the University of East Anglia, told MailOnline a Tier 3 was now inevitable for the capital, adding: ‘I think it would be very brave decision not to do that [upgrade London’s Tier] when you’ve got parts of the UK in Tier 3 that have many fewer cases than London.’

Covid-19 cases rose in 24 of London’s 32 boroughs in the most recent seven-day period, with Havering recording the highest incidence at 389 infections per 100,000 people. It is followed by Barking and Dagenham, at 319.9 and Waltham Forest at 313.7.

Pub bosses have warned upgrading the capital into a Tier 3 — which would see the hospitality sector forced to shut down again — would be like slapping a ‘do not resuscitate’ order on the city’s struggling businesses. 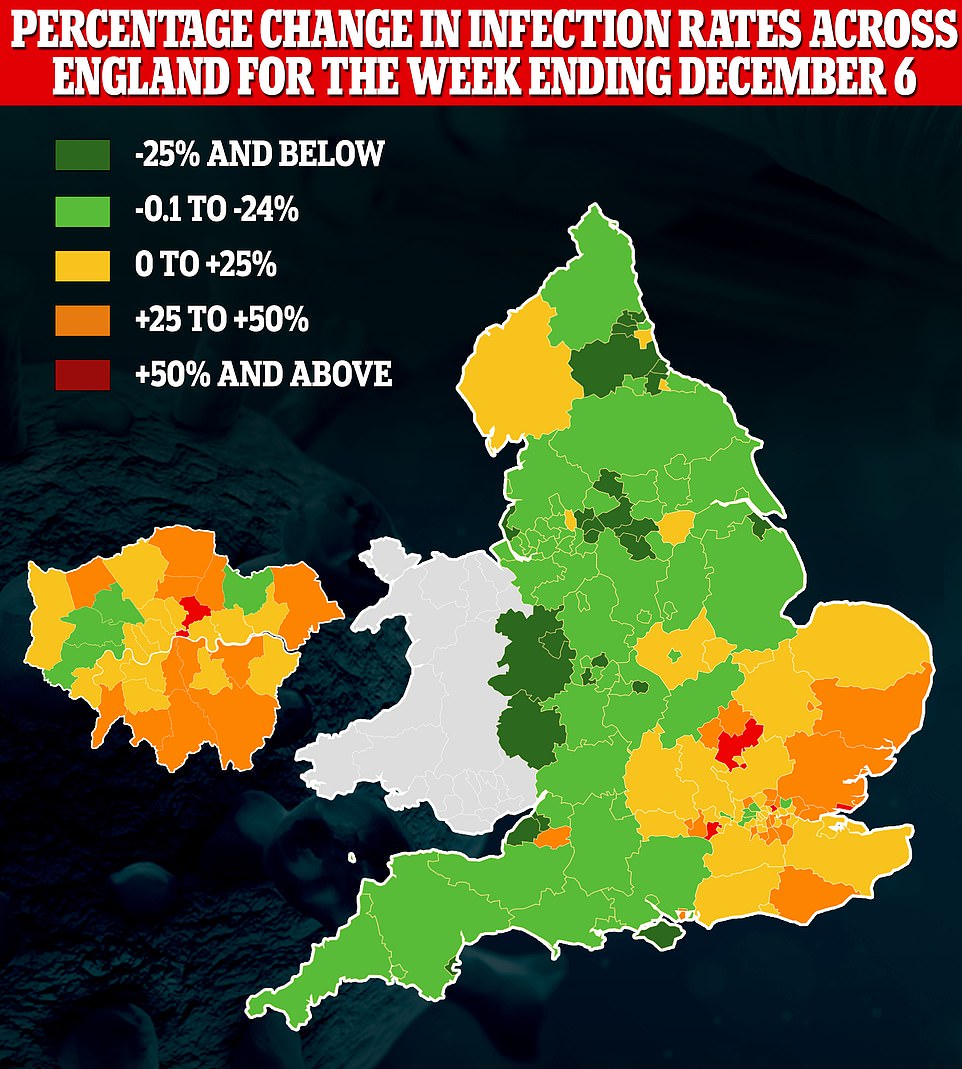 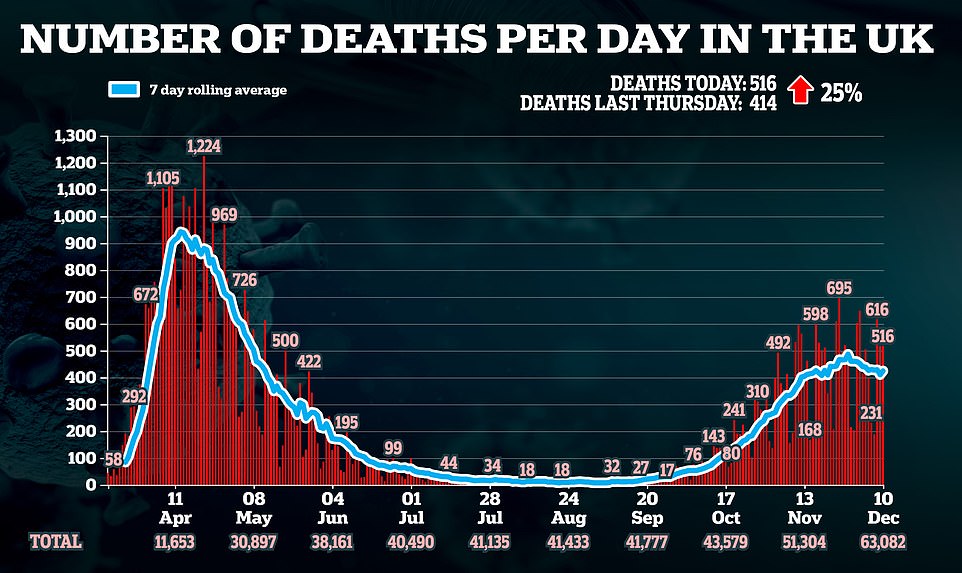 In contrast to London, every local authority in Tier 3 Manchester saw a drop in its infections in the week up to December 3.

Moving London into Tier Three would be the equivalent of slapping a ‘do not resuscitate’ order on the city’s struggling businesses, Boris Johnson was warned last night.

Coronavirus cases are rising sharply in the capital, sparking fears that it could be placed under the most severe restrictions in days.

Yesterday Sadiq Khan, the city’s mayor, pleaded with Londoners to stick to social distancing rules and the wearing of masks.

A decision on whether to move the capital into the top tier – which would see pubs and restaurants closed – will be made in the next few days and will come into force on December 16.

But last night the British Beer and Pub Association said Tier Three would be the ‘writing on the wall’ for many more of the capital’s locals.

And UK Hospitality said moving London into Tier Three before Christmas could cost 150,000 jobs in pubs, restaurants and hotels.

Kate Nicholls, the trade body’s chief executive, said it would be a ‘killer blow’ to hundreds of struggling businesses in the capital.

London Chamber of Commerce and Industry told the Prime Minister that his dream of a Global Britain would not materialise ‘without London operating at full power’.

In the North East – also under the strictest measures in the country – infection rates declined in all but two of its 12 local authorities, showing yet another mismatch with the capital.

Commenting on the figures, medical director at Public Health England Dr Yvonne Doyle said: ‘Everyone’s sacrifices over the past few weeks means cases have reduced significantly in many parts of the country.

‘However, the decline has started to stall and overall, infection rates remain high so we must all stay vigilant. About one in three people who have coronavirus have no symptoms and will be spreading it without realising it.

‘Whatever your plans over the next few weeks, remember to keep your distance, wear a face covering in enclosed spaces, and wash your hands regularly.

‘It’s also a good idea to think about reducing your contacts prior to Christmas to reduce the risk to you and your loved ones.’

Case rates remained at a similar level in the week up to December 6 compared to the previous week across all age groups, PHE said.

Case rates per 100,000 have continued to fall across the West Midlands, North East, and Yorkshire and the Humber – where swathes are in Tier 3 lockdowns.

It comes as a local director of public health in London warned the national lockdown only had a ‘minor and short-lived’ impact on infections in the capital’s worst-hit boroughs.

Dr Mark Ansell said plunging the country into shutdown in November had failed to sufficiently drive down cases in his borough of Havering, in the far east of the city, because many of its residents need to work and can’t afford to self-isolate.

‘A lot of our residents are working in health and social care, a lot of them are self-employed or they’re in small to medium-sized sorts of enterprises,’ he told BBC Radio 4’s Today programme. ‘They need to work and they need to keep working to maintain their financial viability.’

He added: ‘I think the work at home sort of message has benefited some other parts of London but doesn’t necessarily have a great impact in Havering.’

London’s mayor Sadiq Khan said today it was not inevitable that the capital would be moved into Tier Three, despite growing concern among public health officials over rising infections.

He added that officials are ‘working incredibly hard with Londoners across the city to make sure they follow the rules’.

There have been mounting warnings for the city’s nine million residents to stick to social distancing rules – including no mixing with other households – in order to avoid being plunged into Tier Three.

But Professor Paul Hunter, an infectious disease expert, said that high infection rates among secondary school children and working people meant that closing hospitality businesses – a key part of Tier Three rules – might not have the desired effect.

And Britain’s Beer and Pub Association said last night that pushing the capital into the toughest restrictions would be like putting a ‘do not resuscitate’ order on the city, putting dozens of thousands of jobs at risk.

Despite climbing infection rates, hospital admissions and deaths from the virus are still flatlining, data shows, and are far below the levels seen during the first wave.

Just 159 Covid patients are being admitted to hospital every day, on average. In contrast, they topped 800 during the peak of the first wave in April. And Department of Health statistics show the capital is just recording 27 coronavirus deaths a day — a fraction of the scale of the city’s crisis in April.