Kuala Lumpur, Malaysia – Tens of thousands of ethnic Malays have taken to the streets of Malaysia’s capital to “celebrate” a government decision not to ratify a key UN anti-discrimination treaty, amid growing concerns the seven-month administration of Prime Minister Mahathir Mohamad is losing reform momentum.

But the government decided to drop its plan to ratify the convention after the opposition United Malays National Organisation (UMNO) and Parti Islam seMalaysia (PAS) parties whipped up opposition to the plan, claiming it would undermine the constitution and the rights of the majority Malays.

Supporters on Saturday thronged the historic heart of Kuala Lumpur in a conservative show of strength.

Ifan Zaini Md. Tahar, a 42-year-old lawyer, had driven down from the northern island of Penang to attend the rally.

He said there was nothing racist about the event and Malays were simply trying to protect their constitutional rights.

“The constitution is paramount,” Ifan Zaini, an UMNO member, said. “It would go against the principles that were agreed when this country was born. These were the things that were agreed at the time of our independence.” 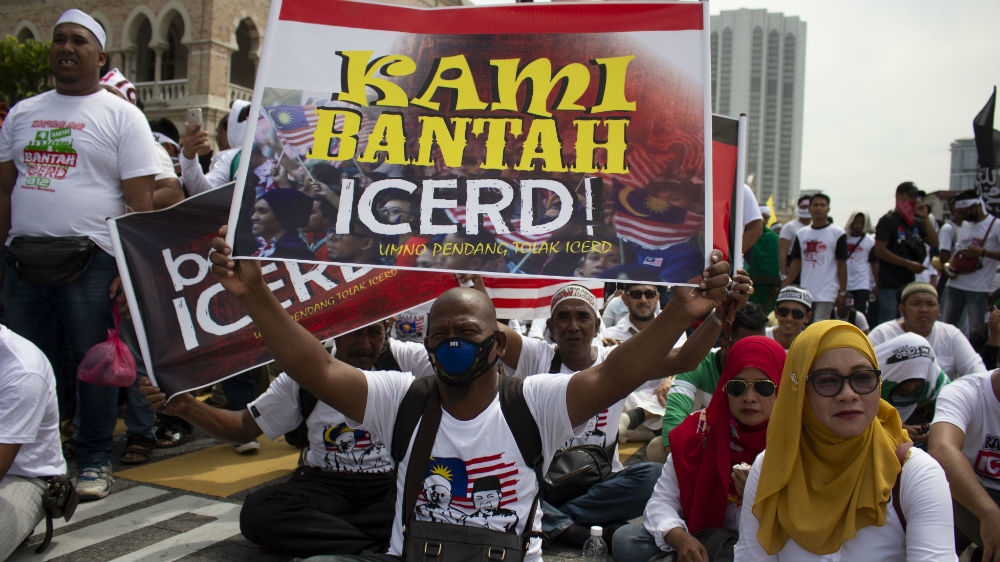 Just over half of Malaysia’s diverse population is Malay, but the country has significant communities of ethnic Chinese and Indian people, many of whom settled in what was then Malaya during the colonial era.

At independence some six decades ago, the minority groups, who’d by then been in the country for generations, were given citizenship. But the constitution included provisions that recognised the “special position” of the Malays as well as the indigenous people of Sabah and Sarawak together known as bumiputra.

Bumiputra also benefits from affirmative action policies that were introduced in the wake of bloody race riots in Kuala Lumpur nearly 50 years ago that give them preferential access to education, property and business. At least 200 people died in the unrest which was blamed on the inequality between the country’s different ethnicities.

Mahathir, 93, has long been seen as a champion of the Malays.

In May, his opposition alliance defeated a ruling coalition that had governed Malaysia for 60 years by promising to tackle corruption, repeal rights-abusing laws and turn the country into one of Southeast Asia’s leading democracies.

But it won the support of only about a quarter of Malays, most of whom stuck with UMNO, which had ruled Malaysia since independence, and PAS.

The furore over ICERD is the latest in a series of decisions that have raised concern the government is holding back on reform.

“The government’s weakness is astonishing,” N. Surendran, adviser to human rights legal group Lawyers for Liberty, told Al Jazeera. “We are very, very concerned that this government will simply not see through the reforms necessary to place Malaysia as a free and democratic nation. The government campaigned on a platform of reform. They have the political capital. They have the support of the people.” 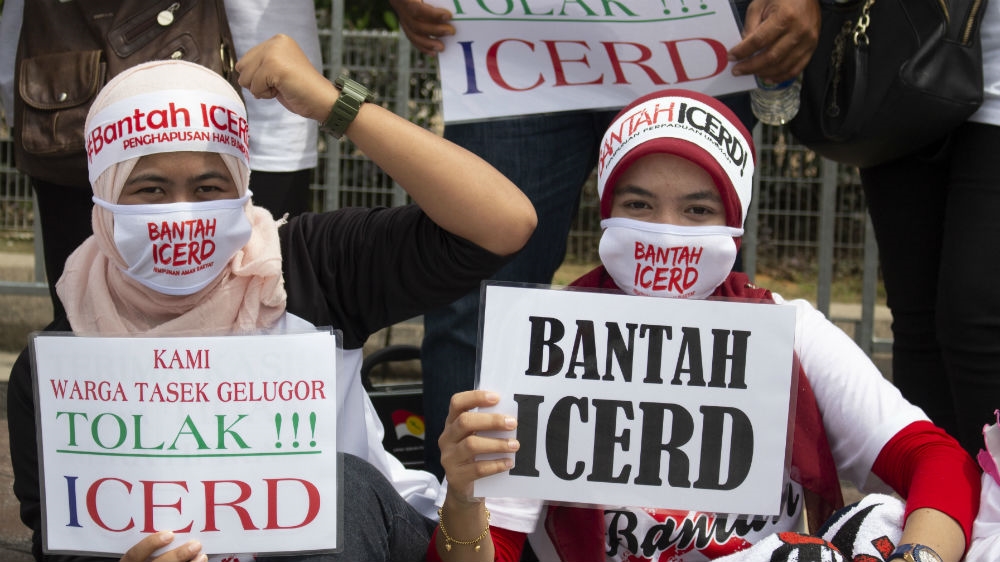 With a week to go before the current parliamentary session ends, a bill to abolish the death penalty for all crimes has still to be introduced despite the government announcing the decision in October.

Some have argued it should even be retained for the most serious of crimes.

And earlier this week, the government softened its moratorium on the use of anti-democratic laws, including the colonial-era Sedition Act following a riot at a Hindu temple outside Kuala Lumpur.

In its annual report on human rights in Malaysia, civil society group Suaram noted that while changes in economic policy had taken place relatively quickly, the government had been “slow when it comes to critical reform on the civil and political rights front”.

The administration had “backtracked” on several key issues, it added.

Oh Ei Sun, a political analyst, said that while the government might be back-pedalling, the situation reflects the country’s voter dynamics.

“It’s a sort of no-win situation,” Oh said. “If the government does sign ICERD they are accused of pandering to the non-Malay voters, but if they don’t sign then UMNO/PAS will say it’s because of our opposition and ‘Look how powerful we are.'”

Speaking to Al Jazeera this week, Foreign Minister Saifuddin Abdullah said he was not surprised at the way UMNO and PAS had responded to ICERD, noting that some Malaysians appeared “allergic” to the idea of human rights.

“The politics of race is so ingrained in society, many people don’t realise that it is a problem, some people think that Malaysia is like this,” he said. 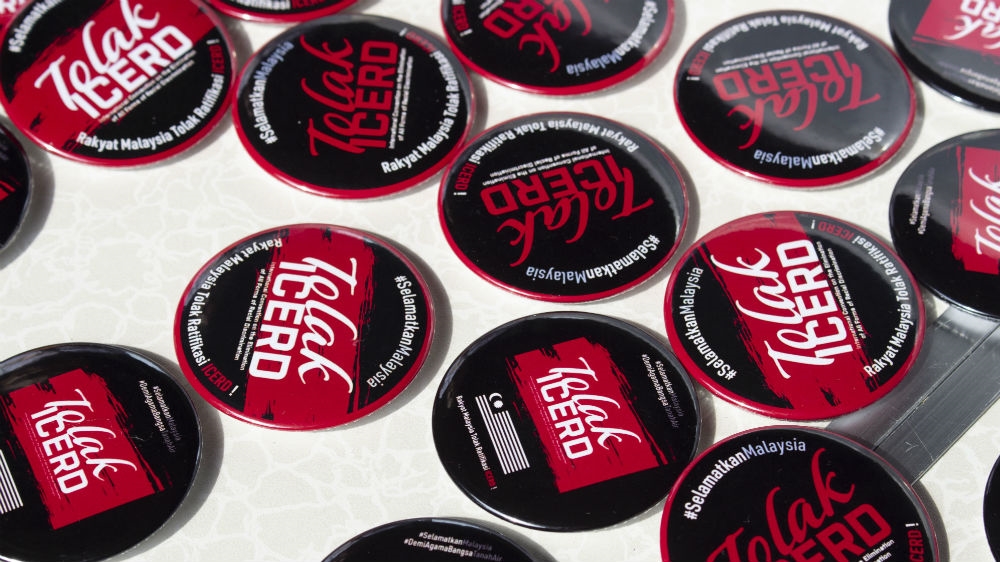 Saturday’s rally took place as the country Human Rights Commission was forced to postpone its annual celebration of human rights for the first time in 18 years after the police warned of unspecified “threats” to national security.

Mahathir had been due to speak at the event, which will now take place on Sunday.

“All of us are hugely disappointed with the progress of human rights in Malaysia,” lawyer Siti Kasim said. “The current government must realise they were voted in mostly by people like us. They must not forget that.”

In the wake of the ICERD debacle, the government remained committed to reforms, Saifuddin said.

PAS declared Sunday a “special” holiday in its northeastern base of Kelantan to allow people the time to make the round-trip to Kuala Lumpur for Saturday’s rally. Others had come from Terengganu in the east and Johor in the south.

At the start of the event, squeezed onto the road in front of the building that once housed the British colonial administration, the protesters stood to sing the national anthem.

“You have to understand the history of Malaysia,” said Abdul Aziz, a 42-year-old engineer, as he sat down afterwards.

“Our local people is Malay. We have been here for thousands of years. We fought for our independence. We died for our country.”

What are Victoria’s new COVID restrictions?