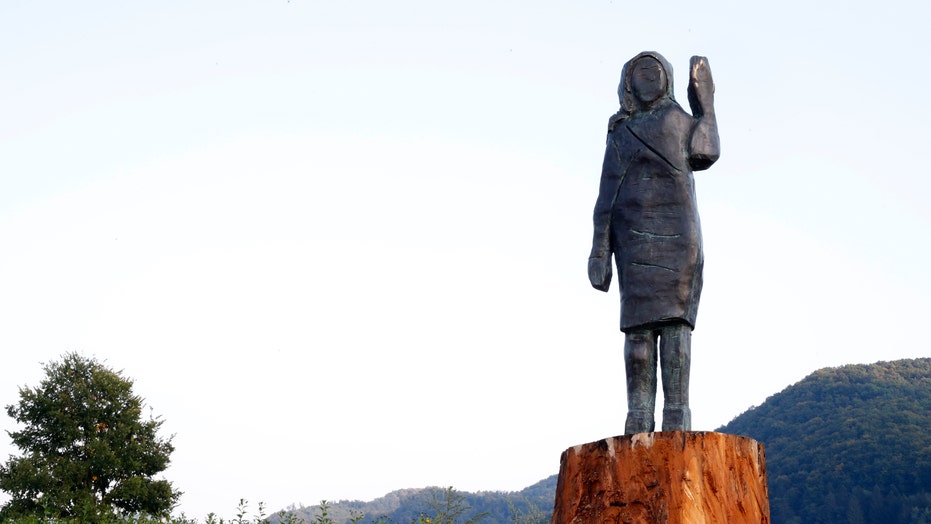 A bronze statue representing Melania Trump was unveiled in her native Slovenia on Tuesday after the previous figure of the first lady was torched during an arson attack on the Fourth of July.

Both statues were created during a collaboration between Brad Downey, an artist from Kentucky, and a local craftsman, Ales “Maxi” Zupevc. The original figure, which was made of wood and cut from the trunk of a linden tree, portrayed the first lady in a pale blue dress similar to the one she wore at Donald Trump’s presidential inauguration.

“We are here today because we put up again a statue of Melania to the place where it was burnt and to commemorate the statue that was set on fire,” said Slovenian artist Marko Vivoda.

The new statue was placed on the same stump as the old one and modeled off of the previous design. In July, Downey said the statue would be made “as solid as possible, out of a durable material which cannot be wantonly destroyed," according to the Guardian.

The wooden figure was burnt as statues of historical figures in the U.S. had become targets of protesters following the May 25 death of George Floyd, a Black man who died in police custody in Minneapolis.

Downey described the arson of the original statue as symbolic of “political tensions” in the U.S. He also claimed it was “conceptualized as criticism” of Donald Trump’s politics.

Zupevc said he and Melania Trump were born in the same hospital which, in part, inspired him to create the design. He carved the statue with a chainsaw and sanded it with a power tool, the news organization reported. 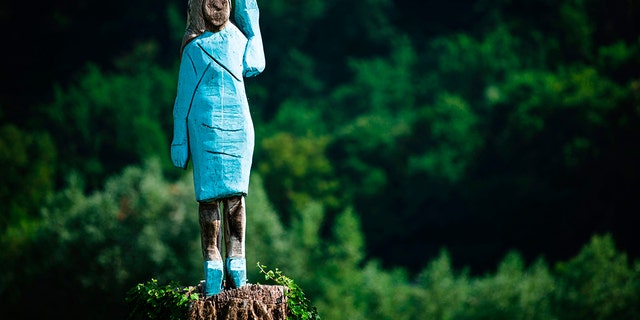 The original wooden statue of Melania Trump is seen near her hometown in Slovenia before it was damaged in July. (Photo credit should read JURE MAKOVEC/AFP/Getty Images)

“I plugged in my angle grinder … I worked and made mistakes … finished the hair … the eyes and all. Then I called my brother, who said: ‘Spitting image of our waitress.’ And so it was," Zupevc said during a documentary film by Downey on the making of the original statue.

A plaque next to the new one reads it is “dedicated to the eternal memory of a monument to Melania which stood at this location.” 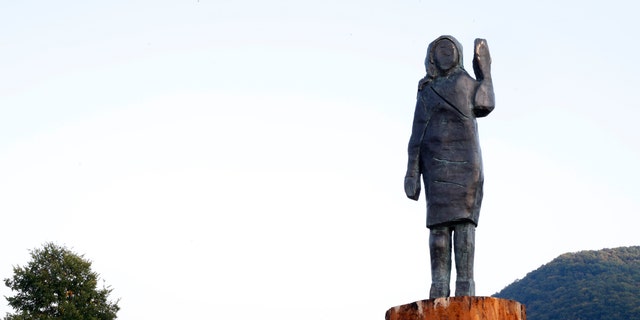 A bronze statue representing the U.S first lady Melania Trump made by Brad Downey, a Berlin-based U.S. artist, is erected in her birthplace of Sevnica, Slovenia, Tuesday, Sept. 15, 2020, after a previous one, made in wood, was set alight. Melania Trump was born and grew up in Slovenia before moving abroad as a fashion model. (AP Photo)

The life-sized sculpture bears no obvious resemblance to the U.S. first lady.

Born Melanija Knavs in nearby Novo Mesto in 1970, the first lady grew up in Sevnica while Slovenia was part of the Communist-ruled former Yugoslavia. An Alpine nation of 2 million people, Slovenia is now a member of the European Union and NATO.

NYC has ‘work to do’ as coronavirus hospitalizations rise, de Blasio says

Snickers is named the nation’s No1 chocolate bar, but what’s your choccy treat of choice? – The Sun