Melbourne Airport has issued fresh calls for a loosening of the federal mask mandate for airports and planes following a global move to drop the requirement, but epidemiologists warn that such a change would be too soon.

The European Union will no longer recommend masks be worn at airports and on planes to prevent the spread of COVID-19 starting next week, though member states can still require them. 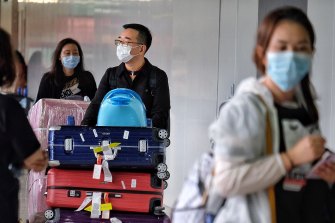 A Melbourne Airport spokesperson said they had been asking for an end to the federal mask mandate since March because of the “disconnect” in COVID rules.

“Airports are very similar environments to supermarkets, shopping centres and sports stadiums, where masks are no longer required,” the spokesperson said.

”There’s currently a disconnect, in that almost every weekend we will have passengers fly into the airport where masks are mandatory, only to then travel to the MCG when they can mingle with up to 80,000 other people without masks.“

Professor Nancy Baxter, head of the University of Melbourne’s school of population and global health, said airports and planes were higher-risk settings, and Australia’s high COVID-19 transmission levels made it unwise to lift the federal requirement for masks now. 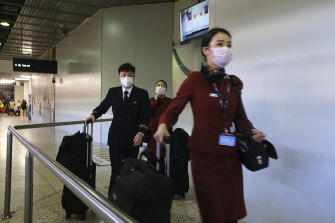 “Unlike the retail setting, you are confined to a very small space in very close proximity to other people on a plane, and you’re forced to sit for long periods of that time,” she said.

“So the risk is different, the setting is very different, and I don’t think saying that we’ve relaxed masks in retail means that we should relax rules on planes. I don’t think that is necessarily a meaningful argument to make. And I would say with the high levels of transmission we have now, we probably should still have masks in retail.

Professor Adrian Esterman, a professor of biostatistics at the University of South Australia, said the European Union’s decision to remove the mandate was “outrageous”, and it would hamper the ability of immunocompromised people to travel.

“It’s governments pandering to the masses,” he said.

Esterman said that despite planes having high-quality air filtration systems, masks were the best line of defence against COVID-19 on planes, where you “don’t get the choice to move away” from someone showing symptoms like coughing or sneezing, as you might in a retail or entertainment setting.

When asked whether Australia might see an end to the federal mask mandate for airports and planes, a representative for transport minister Barnaby Joyce said change would be supported, if it was made based on the relevant health advice. The spokesperson did not respond to further requests for comment.

Virgin Airlines did not respond to specific questions, but did issue a statement that said the company “continues to strongly encourage all guests to follow the government [mask] mandate”.

Qantas, Jetstar and Rex Airlines all declined to comment.

Nanny gets 15 years for trying to kill baby with wipe