Minnesota state troopers on Saturday arrested at least 69 protesters who were demonstrating outside the governor’s mansion against a replacement pipeline, according to reports.

The group, Treaties over Tar Sands, says the pipeline is environmentally unsafe and encroaches on Indigenous lands, according to WCCO-TV in Minneapolis. The protesters claim the pipeline will also help accelerate climate change, the newspaper reported.

More than 500 Native Americans are part of the Line 3 workforce, however, and Enbridge says the project could benefit Native American-owned small businesses in the region, with a total of 5,200 construction jobs.

The protesters moved to the governor’s St. Paul mansion on Saturday after four demonstrators were arrested in front of the state Capitol building on Friday after their permit expired on Thursday, the newspaper reported. 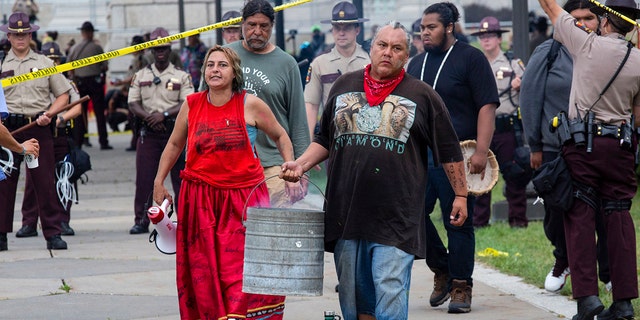 Two activists, who identify as water protectors, carry away the coals of a ceremonial fire after being removed from the site of a protest opposing the Enbridge Line 3 oil pipeline at the Minnesota Statehouse in St. Paul, Minn., Friday, Aug. 27, 2021. (Associated Press)

Demonstrators were arrested on various charges after being asked multiple times to leave, including for third-degree riot, disorderly conduct and felony threats of violence. Walz, a Democrat, was reportedly not at the mansion at the time.

“If you swarm someone’s home, chain yourself to the fence and pull on the gate in an attempt to tear it down, you should expect to be arrested,” Col. Matt Langer, chief of the Minnesota State Patrol, said, according to WCCO.

No injuries were reported.

Earlier this month, hundreds of activists descended on the construction site and many of them vandalized contractor equipment, broke into construction trailers, damaged environmental safeguards intended to control erosion and attempted to trap workers while occupying the site, according to Enbridge.