A whale entangled in a shark net off Sydney’s coast has been miraculously freed in a four-and-a-half hour rescue.

The juvenile humpback whale got into trouble about 800m off Whale Beach, on the city’s northern beaches, on Saturday afternoon.

A concerned woman on shore noticed a kayaker trying to help the trapped animal and called police about 2.55pm.

Expert rescuers rushed to the beach to try and free the whale, which was trapped on the seafloor by the netting. 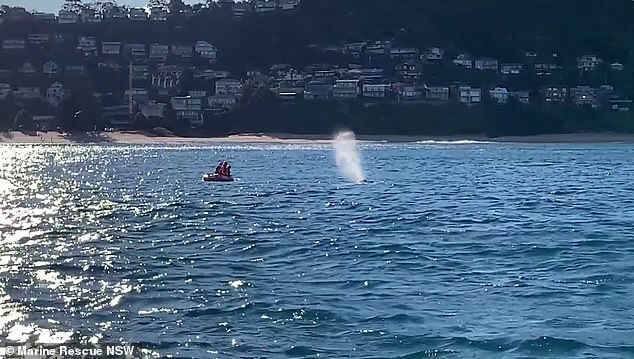 A major rescue operation (pictured) was launched about 2.55pm on Saturday after woman noticed a juvenile humpback stuck in netting off Whale Beach, in Sydney’s Northern Beaches

‘Smiles all around this evening as just before the loss of the light the juvenile humpback whale was successfully freed from the netting it was entangled in,’ the organisation tweeted.

The young whale desperately tried to wriggle free and was fatigued by the time volunteers came to its rescue.

Humpback whales pass Sydney’s coastline from mid-May as they migrate north for their breeding season and start making their way back south from August.

In October and November, the whales usually spotted from the shore are mothers and slower-swimming calves trailing behind their pods as they head south.

They are also typically closer to the coastline and very active in the water, putting on a show for beachgoers as the mother teaches her calf skills, such as breaching. 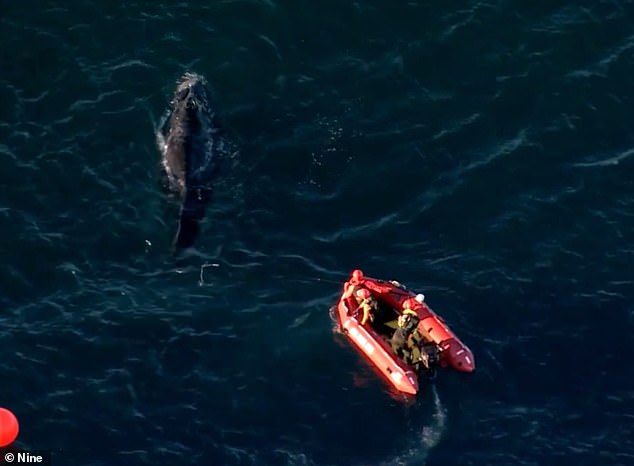