The discoveries were made using light detection and ranging technology that mapped the landscape and penetrated vegetation to reveal features that are invisible to the naked eye. 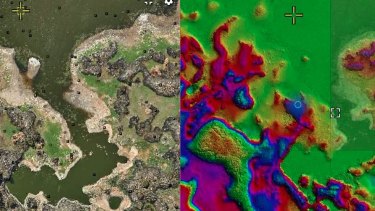 New scans of the Budj Bim Cultural Landscape have revealed more remnants of stone huts and a complex aquaculture system.

The scans uncovered a 115-metre extension of the previously found fish trap complex, and groups of huts hidden beneath the scrub.

Budj Bim Cultural Landscape, which is on Gunditjmara Country, 270 kilometres south-west of Melbourne, was inscribed on the UNESCO World Heritage List in July last year.

It is among the oldest examples of aquaculture in the world and dates back more than 6600 years. The Gunditj Mirring Traditional Owners Aboriginal Corporation campaigned for more than a decade to achieve international recognition from UNESCO.

Gunditjmara traditional owner Denis Rose said the scans were conducted from a plane flying in multiple directions over the landscape. 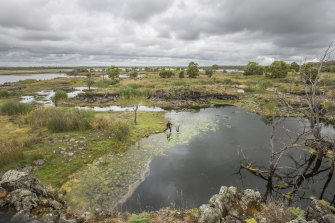 The Gunditjmara people engineered their land by building a complex system of weirs, channels and lakes upon the lava flows that run from Budj Bim to the sea.Credit:Country Needs People/Rodney Dekker

The information will be used to preserve cultural heritage, and for land and water management and restoring koala habitat and wetlands.

Mr Rose said understanding more about Budj Bim would mean its traditional owners were better equipped to protect parts of the site that had been hidden.

"First of all, it’s really just important to know where they are and then look at management requirements," he said. "It’s great that we can use this technology to improve our management of these important places."

Mr Rose said the latest discoveries would lead to a deeper understanding of Indigenous settlement at Budj Bim.

"It’s a great lesson about sustainable development," he said. "You can modify the natural landscape, [but] not to the point of destroying it. That’s exactly what these systems were about."

The Gunditjmara people created a complex feat of engineering, using weirs, channels and holding and growing ponds that allowed them to harvest eels and provide food year round.

Mr Rose said the newly discovered 115-metre section would be among the longest individual channels in Budj Bim’s aquaculture system, which includes dozens of fish traps. The newly found stones hut foundations were scattered across the site, whose unique landscape was created by a lava flow eight kilometres wide and 18 kilometres long. 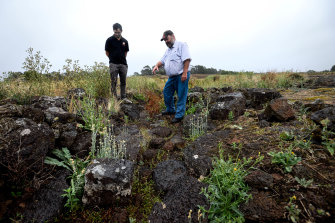 "We’ve been able to extend our knowledge and awareness of quite a lot more about the site in terms of stone hut bases," he said.

Mr Garwood described Budj Bim as a cultural jewel that debunked the notion Aboriginal people were only nomadic.

"Now that Aboriginal people have the intellectual property, it's a more equal relationship," he said. "In the past it's been totally unequal."

Professor Pascoe said advances in archaeological technology would help Australians appreciate the significance of other sites.

"I think the archaeological future in the country is going to be fascinating," he said.

However, he said it was "a little sad" that society appreciated Indigenous history and culture through Western archaeology.

La Trobe University archaeology emeritus professor Tim Murray said light detection and ranging technology (LiDAR) had been developed by the military, then commercialised for broader use.

"Use of LiDAR has helped us understand a great deal more about the size and complexity of settlements," he said.

Professor Murray said the latest discoveries indicated there was much still to learn about Budj Bim.

"The critical thing is to keep everyone focused on the need to preserve it. The way you're going to preserve places like that is understanding them and exploring more about them," he said.