Biarritz: Social media platforms will be asked to open up to new scrutiny of their efforts to tackle violent and extremist content, under a global voluntary code due to be announced by Prime Minister Scott Morrison at the G7 in France on Monday.

However the move comes amid doubts about the US’s commitment to a broader charter of internet safety being pushed by the G7 hosts and Australia.

The transparency code is Australia’s initiative and will be developed and implemented by the OECD group. Digital platforms will regularly report detailed data on their work to intercept or take down extremist content – and the data could be used to add pressure to those platforms who are not doing enough, quickly enough. 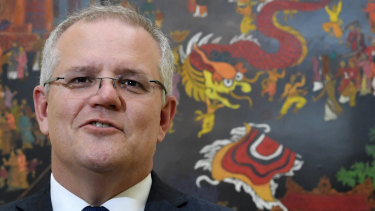 Australian Prime Minister Scott Morrison speaks to the media in Vietnam en route to the G7.Credit:AAP

While some platforms such as Google have already opened up to an extent, this code will apply uniform standards to create “peer pressure” competition between the companies, and could also be used by advertisers to judge where to spend their money.

“This is all about stopping online terrorist and extremist activity,” Morrison said in comments provided to the media.

“We can’t allow the internet to be a safe haven for terrorists and violent extremists to recruit or promote their despicable propaganda.”

This kind of transparency report was a recommendation of the government’s tech taskforce, convened after the Christchurch massacre, which issued its report in June.

The taskforce said digital platforms should report at least twice a year on data such as the number of items removed after being identified as extremist, how many were removed before users could engage with them, and the average time taken to take action after something went online.

However the new protocol means such data will be a global resource, not just limited to Australia – if the social media giants agree.

It is understood they will be approached after the code is developed. Australia and New Zealand will fund the project and the OECD, an umbrella group of 36 major economies including the UK and US, will run it.

This is the first time an Australian prime minister has been invited to join the annual G7 meeting of major world leaders of the democratic world, which is being held this year in the coastal resort of Biarritz in south-west France.

US President Donald Trump tweeted on Sunday that the leaders of the US, UK, Canada, Japan, Germany and Italy were "getting along very well" and having "very good meetings".

He said reports that the G7 would be a disaster and that relations between the US and the other six were tense were "false and inaccurate".

However French president Emmanuel Macron has reportedly done away with the usual end-of-summit joint communique, for fear of repeating last year’s debacle where Trump disavowed the document almost immediately after signing it.

Issues such as climate change, the relationship with Iran and the US trade war with China are admitted points of disagreement between the US and the other six members.

Morrison arrived in Biarritz on Saturday night hoping to push his case for a global fight against extremism on the internet. He is due to have a short "pull-aside" meeting with Trump on Sunday, and a longer meeting with UK Prime Minister Boris Johnson on Monday.

French media reported the White House had opposed social networks signing a “Charter for an open, free and safe internet” inspired by the so-called Christchurch Call.

Google, Facebook and Snapchat had been expected to sign the pledge on Friday, but French officials said it had been shifted to Monday in connection with a "working lunch" when Morrison will join the other G7 leaders.

"There’s no doubt on the fact that the social networks will sign the pledge," French junior minister for the digital industry Cedric O insisted on Saturday.

But French radio station Europe 1 reported the event had “disappeared” from the official agenda and there had been “long doubt” over the participation of Google, Facebook, Microsoft, SnapChat and Twitter.

“Pressure from Donald Trump was mentioned,” the station said, citing an unnamed source.

Digital strategy is a new battleground between the US and France after the latter imposed a 3 per cent digital sales tax on internet giants.

The Australian government anticipated the G7 would be a chance for Morrison to build on his success at June’s G20 summit in Osaka, where he convinced leaders to send a joint message to social media platforms to do more to root out extremist content that can inspire terror and violence.

A senior Trump official denied the White House had pressured social media giants not to sign the charter, which proposes new rules for taking down or moderating extreme content, ensuring transparency and supporting victims.

But the official told Reuters the industry had banded together to try to water down the initiative: “We heard from a couple of companies that they felt bullied by France to join,” he said.

And he was non-committal on whether Trump would sign, saying the White House was still evaluating it.

“It certainly has merits,” he said.

An official said the US’ emphasis was on “opportunities” for tech companies, “not overregulation, over-taxation”.

Florida teacher tried to get ‘8 ball’ of meth delivered at school: cops