Authorities in Moscow on Friday canceled their order that restaurants only admit customers who have been vaccinated against COVID-19, recovered from the virus or have had a recent negative test.

The softening of restrictions in the Russian capital reflects their devastating impact on restaurant owners, who pleaded with city officials for weeks to rescind them. The decision comes even as Moscow is still experiencing a surge in infections and Russia overall registered a new daily record of coronavirus deaths Friday.

The move announced by Moscow Mayor Sergei Sobyanin takes effect Monday. It retracts the measure that has been in place since late June. Customers have been required to visit a Russian government website and get a QR code — a digital pattern designed to be read by a scanner — as proof of their health status. 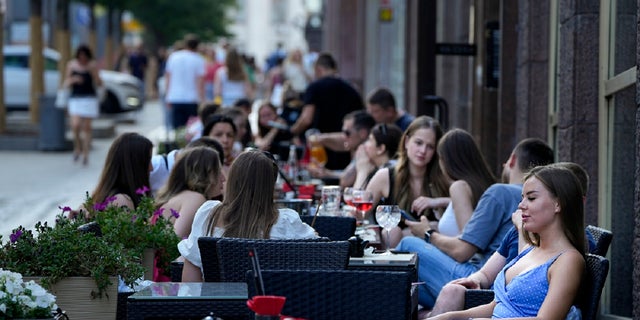 People relax after a hot day at an outdoor terrace of a restaurant in Moscow, Russia, Wednesday, July 14, 2021. (AP)

Sobyanin said the city reversed the decision because the pace of contagion has slowed. Starting Monday, Moscow restaurants and clubs will be able to open at night and hold parties and concerts.

He noted, however, that “we must understand that we are still in the risk zone, the contagion is continuing and we need to observe sanitary demands and conduct mass vaccination.”

Some Russian media speculated the decision to abruptly lift the restrictions in Moscow reflected authorities’ concerns that the tough measures could fuel discontent and further erode support for the main Kremlin party, United Russia, in September’s parliamentary election.

Sobyanin’s statement came as Russia registered a fourth straight day of record-high daily COVID-19 deaths, with the authorities reporting 799 fatalities, including 105 in Moscow. Daily new infections in Russia have soared from around 9,000 in early June to more than 25,000 now and daily fatalities have been topping 700 since last week.

On Friday, officials reported 25,704 new coronavirus cases, including 5,382 in Moscow.

Officials blamed the surge on Russians’ lax attitudes toward taking precautions, the growing prevalence of the more contagious delta variant and widespread vaccination hesitancy. The pace of vaccination has remained lower than in many Western countries. Only 28.6 million Russians — or just 19.5% of the country’s 146 million people — have received at least one shot of a vaccine.

To speed vaccine uptake, authorities in nearly 30 Russian regions have made vaccinations mandatory for certain groups of people, including those employed in health care, education, retail, public transport, government offices and the services sector.

De Blasio: glass skyscrapers ‘have no place on our Earth’