Congratulations are in order. Melbourne lawyer Amie Frydenberg was made a partner last week of independent workplace relations law firm Lander & Rogers. A Monash University graduate, Frydenberg was named a partner in the firm’s workplace relations and safety practice, an area in which the well-regarded legal eagle has represented high-profile companies and individuals in breach of contract and sexual harassment claims, as well as workplace bullying investigations. 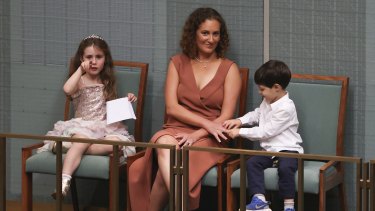 Readers will recall Frydenberg’s star turn on the floor of the House of Representatives at last month’s budget when the mother-of-two sternly told young son Blake and daughter Gemma to “shhh” during their father Josh Frydenberg’s budget speech. It was apparent the young pair weren’t as sold on the Treasurer’s rather extensive spending plan as his Coalition colleagues. The resulting pictures were public relations manna from heaven. So it’s nice to see the Frydenbergs retaining a modern attitude to working political spouses.

Maximum respect for Tim Fung. The founder of ASX-listed online odd-jobs outsourcing site Airtasker is practising what he preaches. The tech whiz is Airtasking himself out on his own platform. Sure, the entrepreneur’s stake in Airtasker was worth $52 million on listing, but can he assemble IKEA furniture?

The one-time Macquarie banker is spruiking his own services on the site as a “Startup Deck Pitch Reviewer” offering to review wannabe entrepreneurs’ PowerPoint pitches and presentations.

“Starting a startup and want to improve the quality of your pitch?” he writes. “I’ll review your pitch deck (up to 30 pages) and provide you with at least three bullet points of critical feedback that I hope can improve your chances of success.”

The entrepreneur’s services don’t come cheap. He’s listed a starting rate of $500 with a turnaround time for the task of about two weeks. Clearly one not to let his reputation and a wealth valued at more than $30 million precede him, Fung lists some of his credentials.

“I’ve had experience in raising capital and pitching to potential partners across a few different opportunities,” he writes. “I’ve been involved in founding and raising capital for a few different startups including Tank Stream Labs (co-working space), Joe Button (bespoke suiting), Circuit Club (motorsport events) … I’ve been an angel investor in a number of companies along the way.” He comes well reviewed. “Great tips and advice from Tim!” wrote one satisfied customer three months ago.

On the flipside, Fung himself uses the platform to outsource a motley assortment of jobs: queueing up for a new-release iPhone 5, handwriting 100 Christmas cards, and yes, he has also needed help on the IKEA assemblage front with an urgent project required on New Year’s Eve. “Tim was very understanding of the parking situation in the CBD on New Year’s Eve and an absolute pleasure to deal with. Thank you for selecting me,” Airtasker Rob B. wrote of Fung. Five stars indeed.

Cruising for a bruising

On Friday we brought you news of a settled defamation skirmish involving millionaire yachtie Matt Allen. 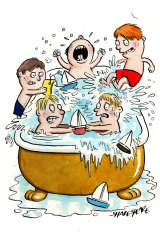 The retired investment banker secured two grovelling apologies from former Cruising Yacht Club of Australia commodore Hugo van Kretschmar and Queensland yachtie Mark Hipgrave after the latter posted a parody video of the famous Adolf Hitler meltdown scene from the film Downfall that mocked Allen, who is a member of the Australian Olympic Committee.

The two men apologised to Allen and paid legal costs but not damages over the spat which involved eligibility rules for the Sydney-to-Hobart yacht race.

Allen and a group of distinguished sailors have made a complaint about the video to Australian Sailing alleging “unconscionable conduct” under its 48-page Member Protection Policy.

Taking action in his sailing-shed fight alongside Allen are commodore of the Cruising Yacht Club of Australia and chairman of IMB Bank Noel Cornish, club board member and rear commodore Bradshaw Kellett, and club life member and former treasurer of World Sailing David Griffith.

The complaint has been submitted, but now there are questions as to whether the document was actually signed by each of the four.

Hipgrave previously said on a blog post the outcome could mean he was banned from sailing.

Australian Sailing wouldn’t comment on the complaint, but no doubt chief executive Ben Houston is busily setting up a tribunal to hear the matter. All this heavy-handedness is in contrast to former Australia Post boss Christine Holgate, who was subjected to several Hitler Downfall parody videos that she took on the chin.

And a word of caution for Australian Sailing. BP fired an employee who shared a Downfall meme on company enterprise bargaining with his workmates. But eventually West Australian refinery worker Scott Tracey persuaded the full bench of the workplace tribunal on appeal that the whole thing was just a joke. Not only did Tracey get his job back, but BP was ordered to pay him $200,000 compensation.

The Aussie Home Loans founder shelled out $5.3 million on Saturday to buy Paddington’s famed Savill Galleries, where gallerist Denis Savill has spent the past 40 years showing major works from the likes of Arthur Boyd, Sidney Nolan and Russell Drysdale.

Savill himself couldn’t be happier with the building’s new owner. “He came to bid himself … and when you stare down everyone else and you’ve got a wallet that five men can’t carry, well no one else really has much chance.”

Symond, who retired as Aussie’s chair last year, has bought the gallery for wife Amber Symond, who was married to Paul Keating’s son Patrick and now makes luxury silk kimonos in her newest venture, Common Hours.

SPOTTED: Industry Minister Christian Porter on Thursday evening in the pointy end of a Qantas plane jetting out of Canberra bound for Perth at the end of a long sitting week. Meanwhile, BHP chief executive Mike Henry was considerably further down the back of the plane for the 4½-hour trip to Perth. Andrew Mackenzie’s Canadian-born successor learnt there’s a particular knack to booking flights at the end of a sitting week that he is yet to master to avoid the exodus.

HENRY DEEDES IN AMERICA: Trump's rivals are squaring up