When ecologist Nicole Kowalczyk wants to decompress from working at home in lockdown, she takes her children to the banks of the Maribyrnong River.

Being out among birds and trees saves her sanity, and with playgrounds shut, she says Lily, 6, and Ned, 1, love to play in the riverside bush in Avondale Heights. 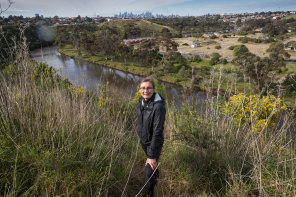 High on a path in Essendon West, where the family cycles, there is a breathtaking view of the Melbourne CBD, with the river winding poetically through the foreground.

It’s a precious environment that Dr Kowalczyk wants to preserve for her children.

She has just been appointed as the Maribyrnong Officer at the Yarra Riverkeeper Association, a paid, independent voice for the Maribyrnong River. It’s a three-year post, funded by a $120,000 grant from The Ross Trust.

The role is a pilot, which she hopes will morph into a Maribyrnong riverkeeper job, depending on more funding and community support. The Werribee and Yarra rivers already have “keepers” and there is a Port Phillip Baykeeper.

When lockdown ends, Dr Kowalczyk hopes to go on to the water twice a week, using a boat donated by a benefactor worth $40,000.

One of Dr Kowalczyk’s aims is to lobby the state government to introduce a Maribyrnong River Protection Act, which would make authorities more accountable for actions that affect the river.

She said it would provide a framework to improve practices such as pollution management and greater environmental flows, and would bring Indigenous people into decision making.

It could also mean greater planning controls, to protect the river from development too close to the water.

In a housing development earmarked for the 128-hectare former Defence explosive factory at Maribyrnong, across the river in our photo, Dr Kowalczyk wants to see ‘green’ elements such as stormwater management and native trees.

She would like to see improved water quality readings of the river. It has suffered from being a noxious dumping channel from factories and still collected petrochemical run-off from roads and microplastic litter.

Dr Kowalczyk said the river could do with a higher profile. “I know how important it is to me and my wellbeing and I suspect it’s equally important, if not more, to others,” she said.

“If we can keep the Maribyrnong in the front and centre of our councillors’ and politicians’ minds, then they will invest more in this river.”

Peter Somerville, from Maribyrnong River Cruises and Friends of the Maribyrnong Valley, welcomed the new role, saying other riverkeepers had won the attention of the state government.

He said “too much bureaucracy” from multiple organisations was stopping environment work getting done.

Mr Somerville described the Maribyrnong as “a forgotten asset of Melbourne”.

He has seen eagles flying overhead and seals, dolphins and the odd penguin in the river, “but it doesn’t get the publicity compared to when they’re in the Yarra”.

Photographs show some of earliest clashes between England and Scotland

Golden State Killer says he’s ‘truly sorry’ as he is sentenced to life for 26 rapes, murders

Family barricade their room after daughter was 'accosted by a staff'