New York: City officials have hired contract labourers to bury the dead in its potter’s field on Hart Island as the New York’s daily death rate from the coronavirus epidemic has reached grim new records in each of the last three days.

The city has used the strip of land belonging to the Bronx borough to bury New Yorkers with no known next of kin or whose family is unable to arrange a funeral since the 19th century. 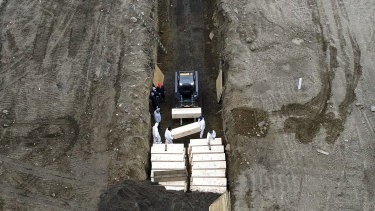 Workers wearing personal protective equipment bury bodies in a trench on Hart Island in the Bronx borough of New York on Thursday.Credit:AP

Now, as it deals with a mounting coronavirus death toll and dwindling morgue space, it has shortened the amount of time it will hold unclaimed remains before burying them in its public cemetery. Under the new policy, the medical examiner’s office will keep bodies in storage for just 14 days before they'll be sent to the island.

Typically, some 25 bodies are interred each week by low-paid jail inmates working on the island, which is accessible only by boat. That number began increasing in March as the new coronavirus spread rapidly, making New York the pandemic's worst affected city in the US.

Now about two dozen bodies a day, five days a week are buried on the island, said Jason Kersten, a spokesman for the Department of Correction, which oversees the burials. 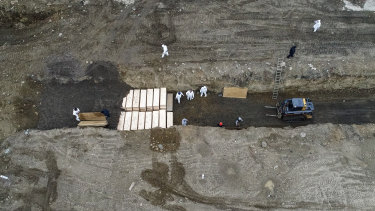 Hart Island has been used as a mass grave since the 19th century.Credit:AP

Before burial, the dead are wrapped in body bags and placed inside pine coffins. The deceased’s name is scrawled in large letters on each casket, which helps should a body need to be disinterred later. They are buried in long narrow trenches excavated by digging machines.

"They added two new trenches in case we need them," Kersten said. To help with the surge, and amid an outbreak of the COVID-19 respiratory illness caused by the virus at the city’s main jail, contract labourers who have been hired, he said. 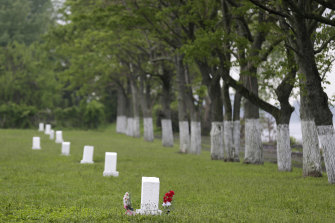 White markers, each indicating a mass grave of about 150 people, are displayed on Hart Island in New York in 2018.Credit:AP

New York City Mayor Bill de Blasio said on Monday that officials had explored the possibility of temporary burials on Hart Island. The city’s 2008 Pandemic Influenza Surge Plan states that Hart Island would be used as a temporary burial site in the event the death toll reached the tens of thousands and if other storage, such as the refrigerator trucks parked outside hospitals, was full.

More than a million mostly indigent New Yorkers are buried on the island.

New York state reported 799 more dead, its third straight day of record-high fatalities, on Thursday. More than 7000 people have died in the state, accounting for almost half the US death toll of around 16,000.

"That is so shocking and painful and breathtaking, I don't even have the words for it," New York Governor Andrew Cuomo said, though he added that there were hopeful signs, including slowdowns in the number of people being hospitalised and being admitted to intensive care. He said hospitals were standing up to the strain so far and the onslaught of patients has not been as big as feared.

Worldwide, the number of dead rose past 90,000 and confirmed infections reached about 1.5 million, according to Johns Hopkins University, though the true numbers are believed much higher, in part because of different rules for counting the dead and cover-ups by some governments.

Numbers released on Thursday by the world's largest economy showed that 6.6 million American workers applied for unemployment benefits last week, on top of more than 10 million in the two weeks before that.

That amounts to about 1 in 10 US workers, the biggest, fastest pile-up of job losses since record-keeping began in 1948.

The real numbers could be even higher because state unemployment offices around the country have been overwhelmed with claims, and some people have been unable to get through by telephone or website.

Looking for some good news?

We could all do with some good news right about now. That’s why we have launched The Good News Group, a Facebook group where we’ll share uplifting, inspiring and positive stories and invite members to do the same. Join the group here.

Manatee found with ‘TRUMP’ scrawled on its back in Florida