‘They’ve kicked away the ladder of redemption’: Nine former Tory MPs who voted down Boris Johnson’s bid to leave on October 31 have little chance of rejoining party, says No10 source

They all voted for the deal on Tuesday night but against the timetable motion. 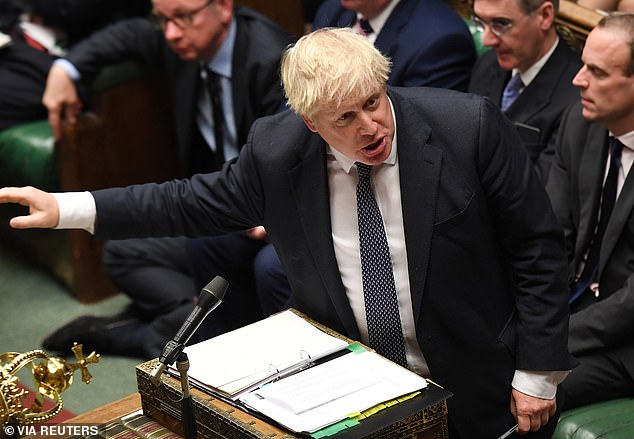 After losing that vote Mr Johnson announced he would have to ‘pause’ his legislation and wait for EU leaders to impose a Brexit delay.

The vote had divided the 21 former Tory rebels into ‘two very separate camps’, the source said.

‘We have those who lost the whip but have supported the government since in trying to get a deal through, and we have another group who seem to be totally opposed to Conservative policy and bent on inflicting a vindictive political defeat on the PM.

‘There a ladder of redemption and it follows that the first group has started to climb it, while the other group has kicked it away.’

One rebel, Antoinette Sandbach, offered to back Mr Johnson on both votes but only if she was given a guarantee she would be readmitted and could fight the next election as a Conservative, a source told the Mail.

This offer was refused.

Last night Miss Sandbach claimed her negotiations were ‘primarily’ about giving the House of Commons a bigger say on the post-Brexit relationship with the EU, avoiding No Deal at the end of transition and greater Parliamentary scrutiny of prerogative powers.

‘As the policy issues weren’t dealt with I and others voted against the programme motion.’

Several local associations have already begun the process of selecting new candidates for the seats.

With an election looming, that process is set to accelerate in the coming weeks, according to a senior Tory source.

Mr Hammond defended his vote, arguing it was wrong to push the deal through at ‘breakneck speed’.

‘I believe in delivering Brexit, but I also believe in Parliamentary scrutiny,’ he wrote on Twitter.

‘That’s why I voted for the Brexit bill to progress to the next stage, but against No10’s plan to rush it through at breakneck speed. Now’s the time for cool heads, to calmly consider the Bill.’

At Prime Minister’s Questions in the Commons, Mr Hammond stood alone behind the Speaker’s Chair, with Tory MPs appearing to avoid speaking to him during the one-hour session.

Boris Johnson sets new coronavirus testing target of 200,000 a day – by the end of May – The Sun