Eco-mob block all FOUR corners of London: Insulate Britain wreak ELEVENTH day of chaos by barricading Blackwall Tunnel in the East, Hanger Lane in the West, Arnos Grove in North and Wandsworth Bridge to the South

Enviro-idiots have sparked traffic chaos yet again by blocking Blackwall Tunnel and Hanger Lane Gyratory in London this morning while Metropolitan Police officers appear to stand by – just 24 hours after the Prime Minister threatened six-month jail terms for protesters.

Images show demonstrators from Extinction Rebellion offshoot Insulate Britain sitting on the road by the entrance to Blackwall Tunnel, causing huge tailbacks close to the centre of the capital on what is the group’s eleventh day of protests in recent weeks.

Police previously complained that they have lacked sufficient powers to stop eco-protesters from bringing some of the UK’s arterial roads such as the M25, M1 and M4 to a standstill. They have faced intense scrutiny for failing to move the activists off the roads quickly.

Some drivers have been stranded in gridlock while taking relatives to hospital or transporting vital supplies. 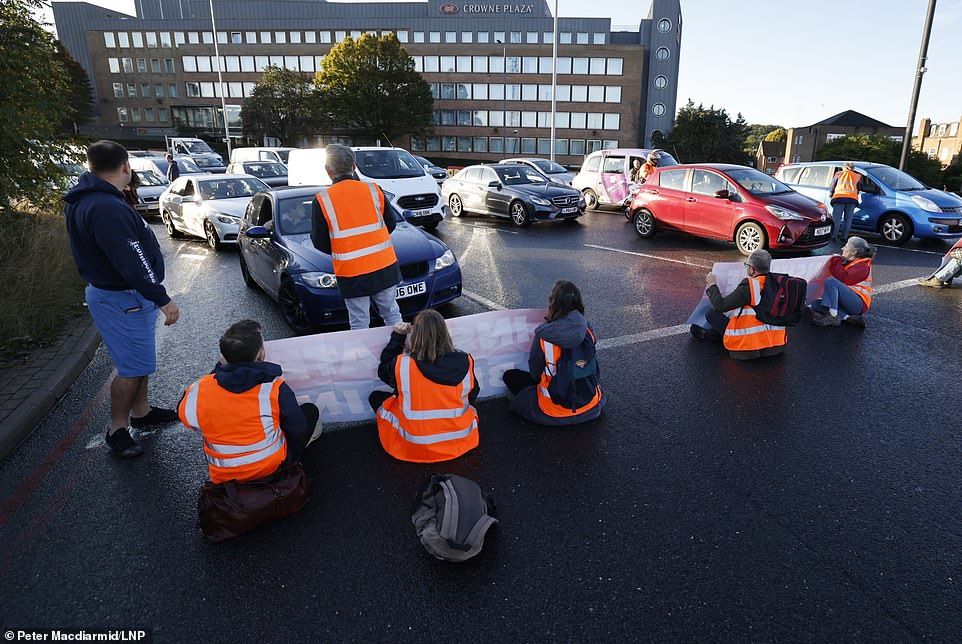 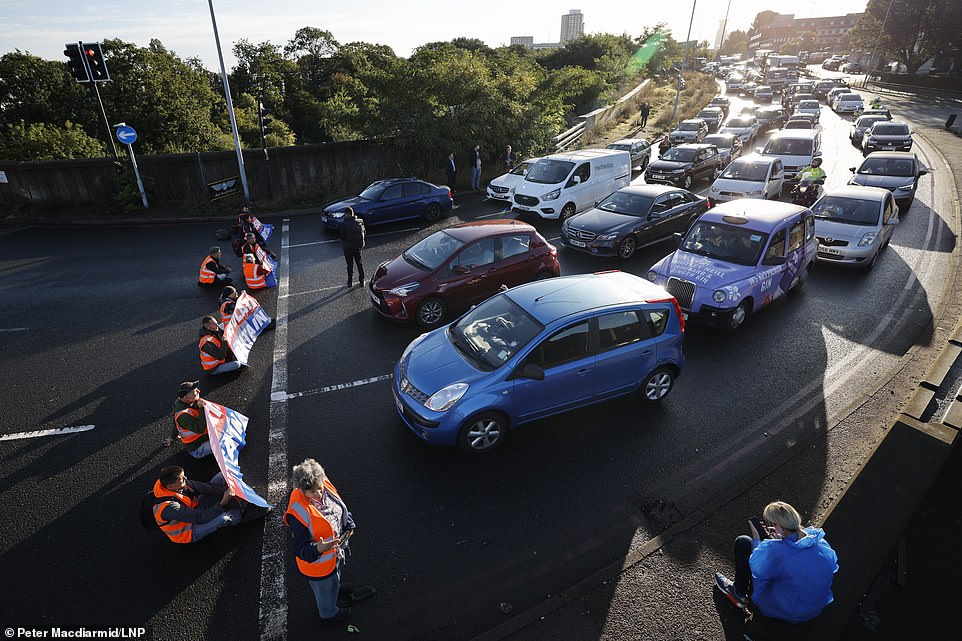 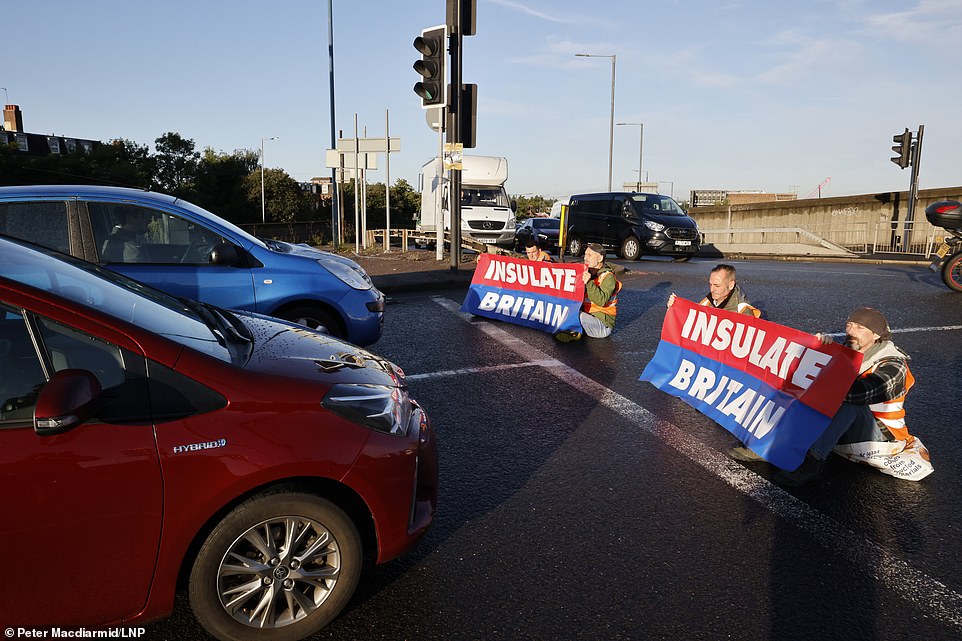 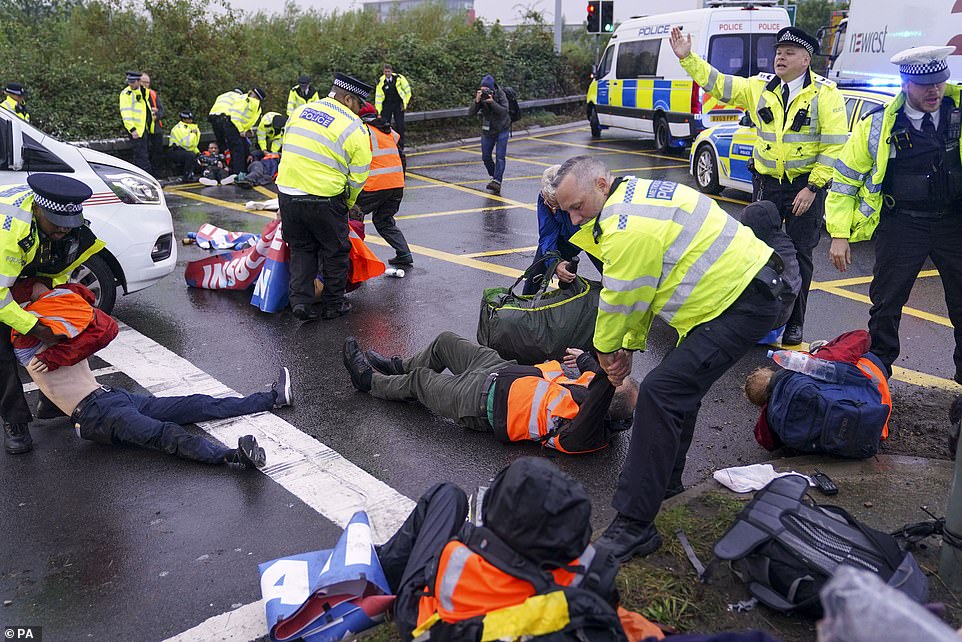 Police officers detain a protester from Insulate Britain occupying a roundabout leading from the M25 motorway to Heathrow Airport in London on September 27, 2021

Boris Johnson said: ‘This Government will always stand on the side of the law-abiding majority and ensure the toughest penalties possible for criminals who deliberately bring major roads to a standstill.

‘We will give the police the powers they need to stop their reckless and selfish behaviour.

‘The right to protest is sacrosanct, but there is no right to inflict chaos and misery on people trying to go about their lives.’

Mr Johnson outlined his hardline stance as he arrived at the Tory Party conference last night against the backdrop of the separate road chaos caused by the fuel crisis, which has led to a critical shortage of petrol on forecourts in London and the South East.

With almost 200 troops prepared to swing into action to help alleviate the situation from tomorrow, the Petrol Retailers Association reported a ‘distinct improvement’ in the situation across much of the country due to the ‘restraint’ of drivers.

However, shortages appeared to be worsening in London and the South East. 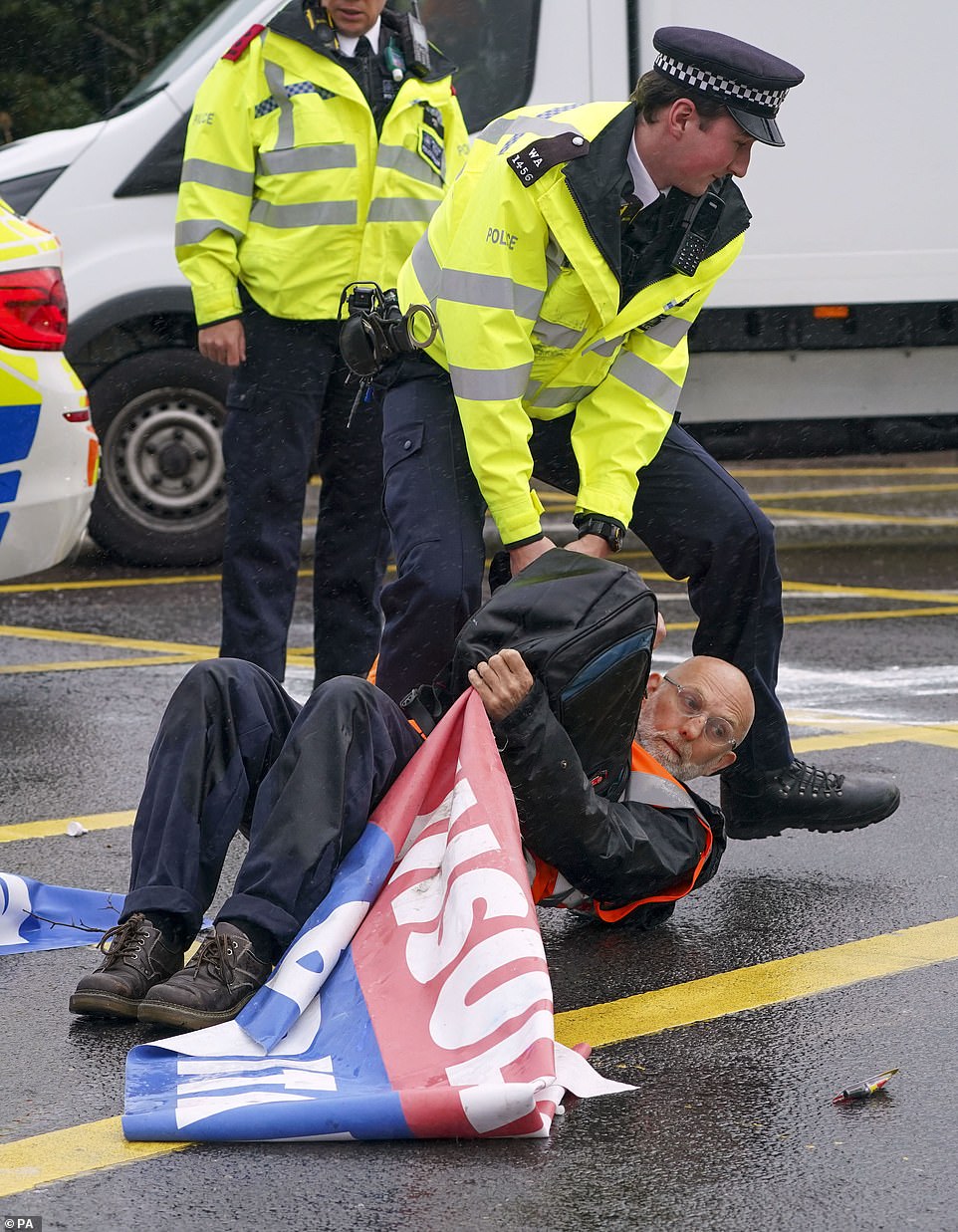 Under the legislation, activists who bring vital transport arteries to a standstill will face up to six months in prison. Pictured: A protester occupying an M25 roundabout is detained 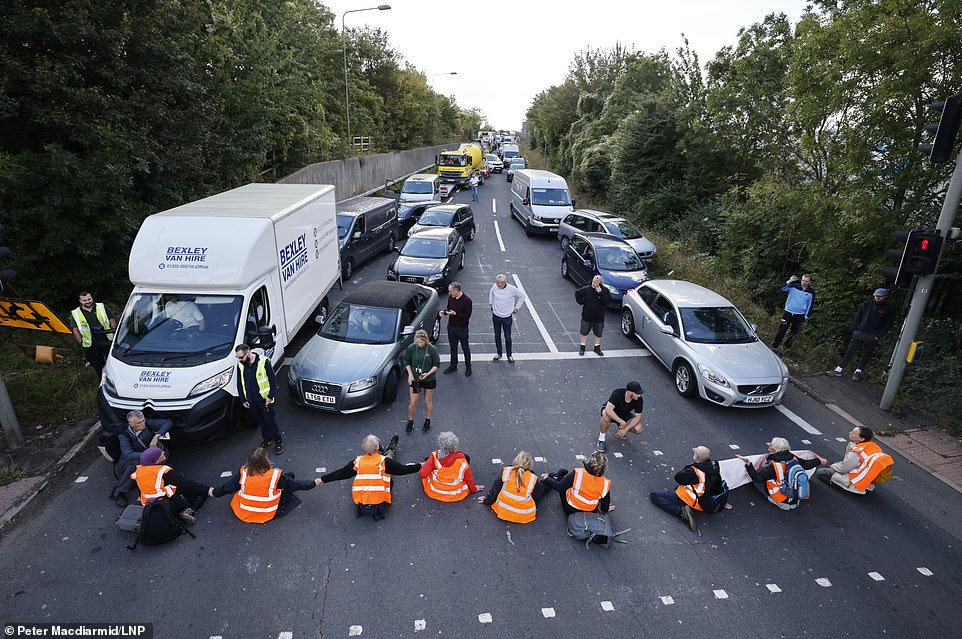 It comes after the separate road chaos caused by the fuel crisis, which has led to a critical shortage of petrol. Pictured: Activists block the road near to the junction 3 of the M25 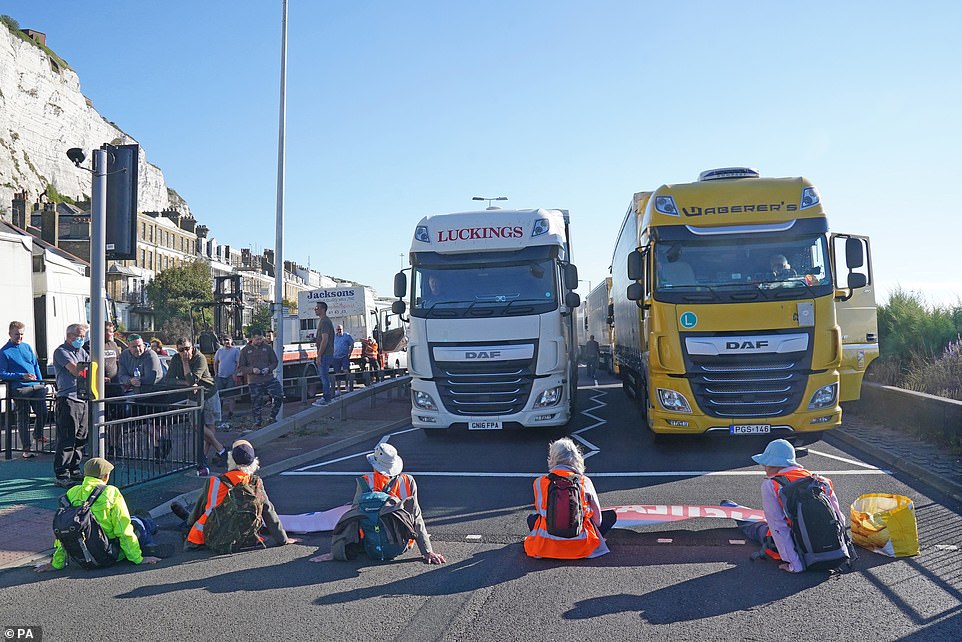 The move follows complaints from the police that they have lacked sufficient powers to stop eco-protesters. Pictured: Protesters from Insulate Britain block the A20 in Kent

As Conservative delegates poured into Manchester for the conference:

A former Tory Cabinet Minister criticised industry bosses for demanding the return of cheap foreign labour rather than boosting the skills and wages of British workers post-Brexit.

Writing in the MoS, David Jones said: ‘The Remain lobby is both angry and influential, even now. The fuel crisis is an all-too-useful shroud – and they are waving it with vigour’;

lThe Cabinet Office launched a leak inquiry into how selective briefings from a meeting about fuel supplies found their way to ITV News, stoking the fuel crisis, as the MoS revealed last week.

The Government has accused the Road Haulage Association of doing so to force Ministers to let in more lower paid foreign workers, which the RHA has flatly denied.

Home Secretary Priti Patel will this week unveil the crackdown on motorway protests, with tougher sentences introduced by amending the Police, Crime, Sentencing and Courts Bill.

While National Highways has been granted injunctions to prevent people from obstructing roads, officers cannot arrest people for flouting the court orders because it is a civil not a criminal matter.

The new laws are expected to be on the statute book by the turn of the year. 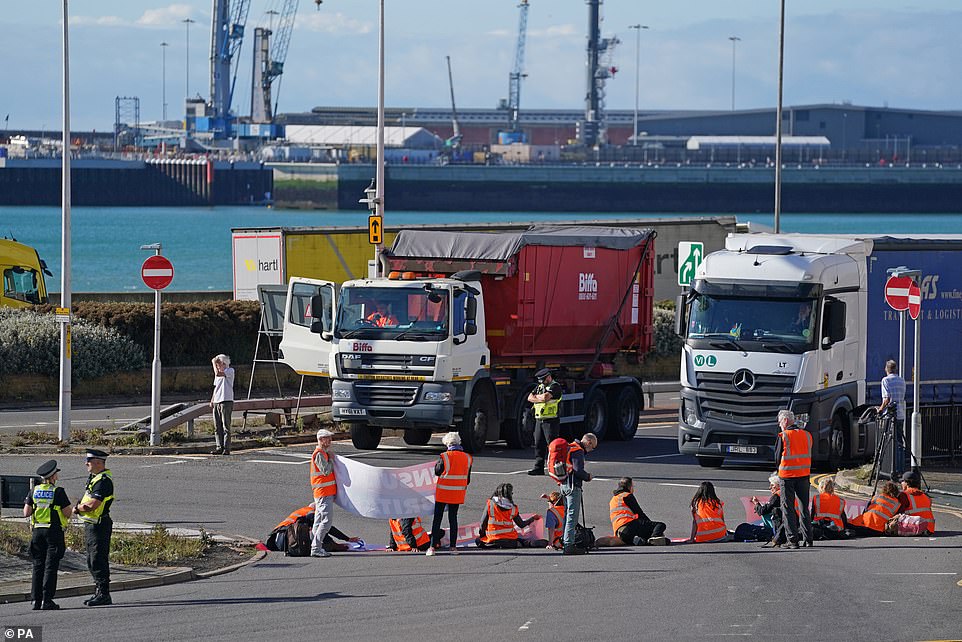 Mr Johnson outlined his hardline stance as he arrived at the Tory Party conference last night. Pictured: Protesters from Insulate Britain block the A20 in Kent on September 24 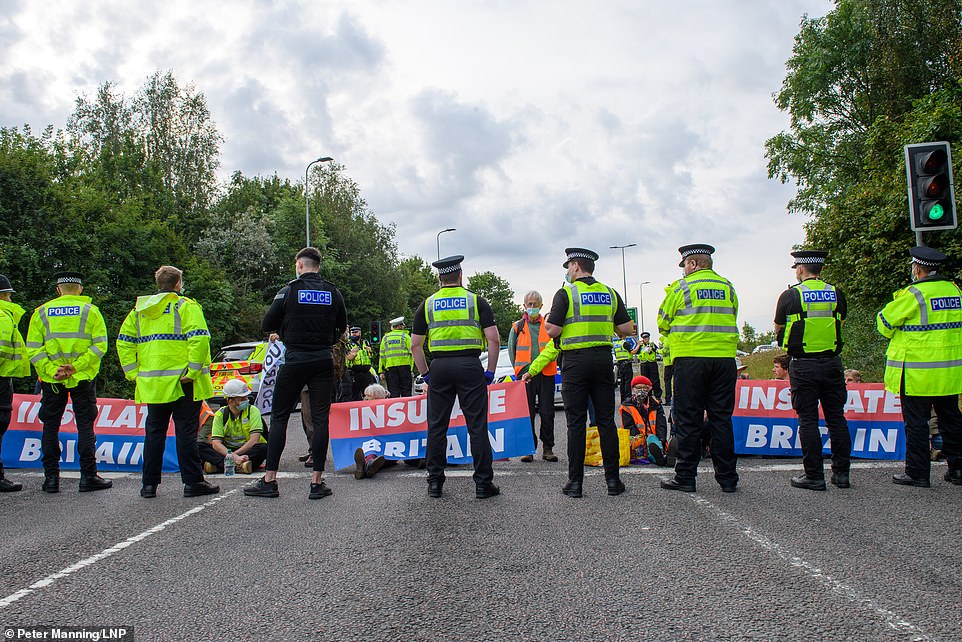 Protesters from climate campaign ‘Insulate Britain’, an offshoot of Extinction Rebellion (XR), block the A41 roundabout at Junction 20 of the M25 London Orbital Motorway 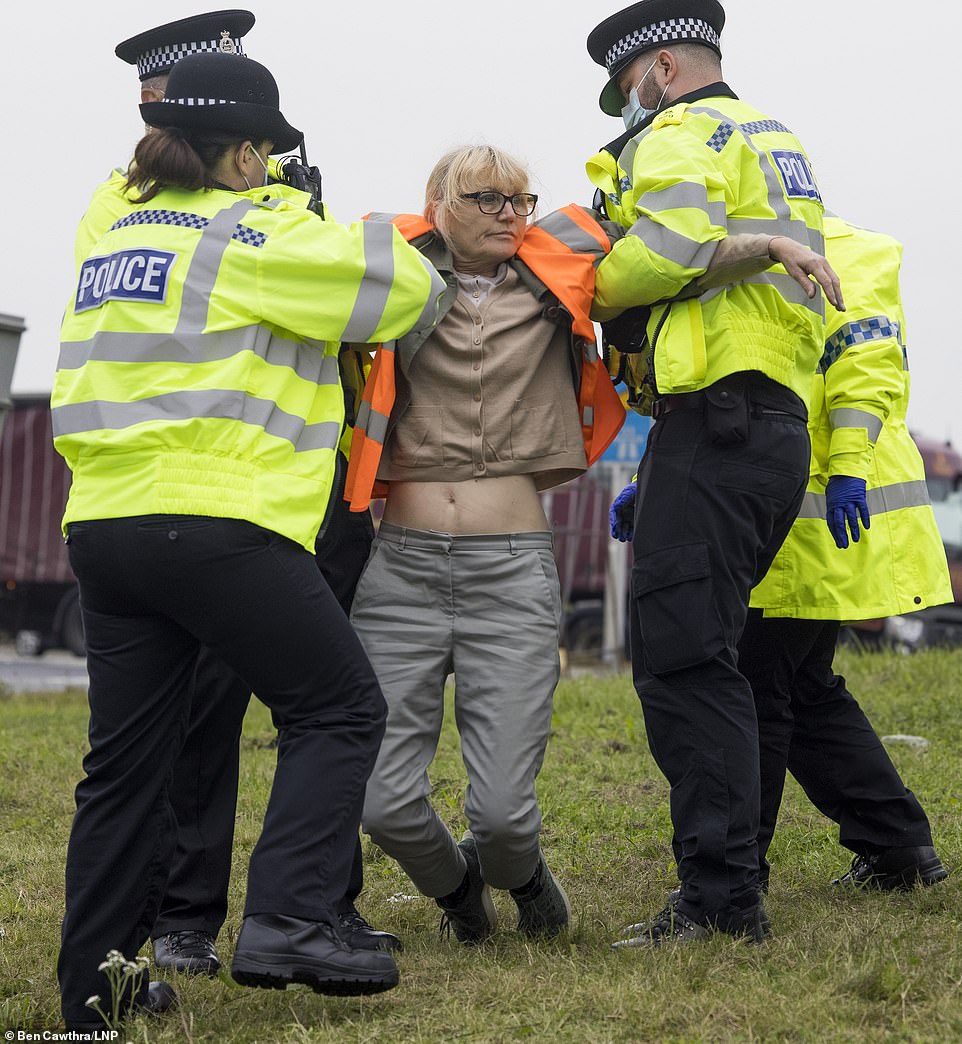 Some drivers have been stranded in gridlock while transporting vital supplies. Pictured: Protester is arrested after attaching herself to A1M junction near Welwyn Garden City

An offence of ‘obstructing a highway’ already exists, but carries only a maximum fine of £1,000.

The proposed increased penalties will mean police can remand protesters in custody after charging them, and create a criminal record for them.

Insulate Britain – which is demanding the Government pay for all homes in the country to be insulated by 2030 – has brought major roads to a standstill with ten protests in less than three weeks. Around 450 arrests have been made.

‘The law does not currently reflect the serious disruption caused by these dangerous actions.’

Ms Patel said: ‘The right to protest is a fundamental principle of our democracy but we will not tolerate guerrilla tactics that obstruct people going about their day-to-day business.

‘That is why we will increase the maximum penalty for disrupting a motorway to an unlimited fine or up to six months in prison – or both.

‘While the Labour Party stand on the side of these so-called ‘activists’, the Conservative Party will always back the law-abiding, hard-working majority in this country.’

British girls and their teacher sexually assaulted on trip to Ghana