Victoria has reported one new local case of coronavirus on Sunday, which the health department says is a primary close contact who has been in quarantine through their infectious period.

There were 14,390 vaccine doses administered across the state on Saturday and 17,102 test results returned. 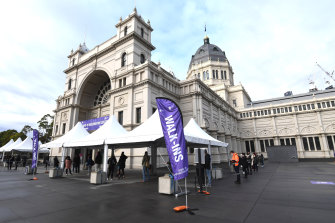 Melburnians line up to be vaccinated against COVID-19 at the Royal Exhibition Building this week. Credit:Joe Armao

No new cases of the virus were found in hotel quarantine. There are 68 active cases remaining.

The new case comes after The Age revealed the state government is secretly negotiating with three crossbenchers to introduce specific pandemic laws that would permanently replace controversial state of emergency powers and change the way the state manages COVID-19.

The new laws would be designed to cover all future pandemics and it is intended that they will be in place by December.

State of emergency laws have been active in Victoria since last March as the legal instrument that allows authorities to enforce a range of public health commands, including lockdowns, mandatory mask wearing and 14-day quarantine.

It comes after Victorian Premier Daniel Andrews confirmed late on Saturday night he would return to work on June 28, more than three months after he fractured his spine and broke six ribs in a fall.

Mr Andrews also released a photo of him getting inoculated with the Pfizer vaccine on Wednesday.

NSW reported no new local COVID-19 cases on Sunday but remains on high alert after a Victorian couple with the virus travelled through the state last week.

NSW Health asks anyone who resides or works in, or has visited Gillenbah, Forbes, Dubbo, Coonabarabran and Moree since June 1 to be especially vigilant for the onset of even the mildest of cold-like symptoms and get tested.

Additional testing clinics in these centres are open on Sunday and Monday.

NSW reported 17,187 tests to 8pm on Saturday. One new overseas-acquired case was reported. Twenty-five people are being treated for COVID in NSW, none of them in intensive care.

A single new Victorian case reported on Saturday morning – a man in his 30s from City of Melbourne with a young family. Health authorities said the man was likely to be carrying the Kappa strain. Contact tracers had identified crossovers in geography and social habits between him and other cases.

The source of his infection is still unknown.

Six new exposure sites have been added across the inner Melbourne suburbs of Southbank and Docklands during the weekend, including an office tower near Marvel Stadium, a community hub with maternal health services, and a supermarket.

As of Saturday, there were around 2300 primary close contacts still in isolation in Victoria.

More than 4500 close contacts have been released from two weeks of quarantine after returning negative results on their day 13 COVID tests.

The Department of Health have shared a warning after viral fragments were found in Melbourne’s eastern suburbs between June 9 and 10.

Residents and visitors of Balwyn North, Bulleen, Bundoora, Eaglemont, Heidelberg, Heidelberg Heights, Ivanhoe, Ivanhoe East, Kew East, Macleod, Rosanna, Viewbank, Watsonia and Yallambie between those dates are urged to monitor for COVID-19 symptoms and to get tested if any develop.

While there have been a number of exposure sites in the eastern suburbs, health authorities say the viral fragments are of interest as there is no confirmed active cases still in those communities.