Online marketplace Etsy has been slammed by the Auschwitz Memorial for allowing the sale of ‘disrespectful’ Camp Auschwitz T-shirts.

The organisation condemned the £19.95 top, which was being sold by a US based seller to buyers in the UK but has now been removed.

The T-shirt featured a skull and crossbones with the phrase ‘Camp Auschwitz’ emblazoned on the front.

The slogan referenced the infamous Nazi concentration camp, where more than 1.1 million people were killed during World War II.

The product description said the T-shirts were: ‘Everything you’ve dreamed of and more. It feels soft and lightweight, with the right amount of stretch.

‘It’s comfortable and flattering for both men and women.’

The item was listed for sale yesterday, drawing instant criticism from the memorial who said the product was disrespectful to the memory of Holocust victims.

The products were removed by Etsy following the backlash and the seller has now been banned permanantly from the site.

It comes after a rioter who stormed the US Capitol on Wednesday was pictured wearing a ‘Camp Auschwitz’ sweatshirt. 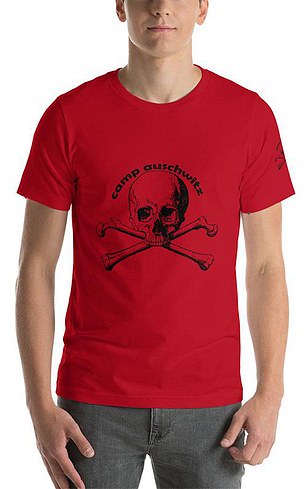 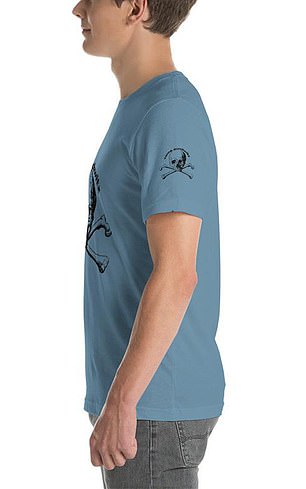 T-shirts with the slogan ‘Camp Auschwitz’ were listed for sale on online marketplace Etsy for £19.85 before they were removed following criticism from the Auschwitz Memorial who said the products were disrespectful to Holocaust survivors 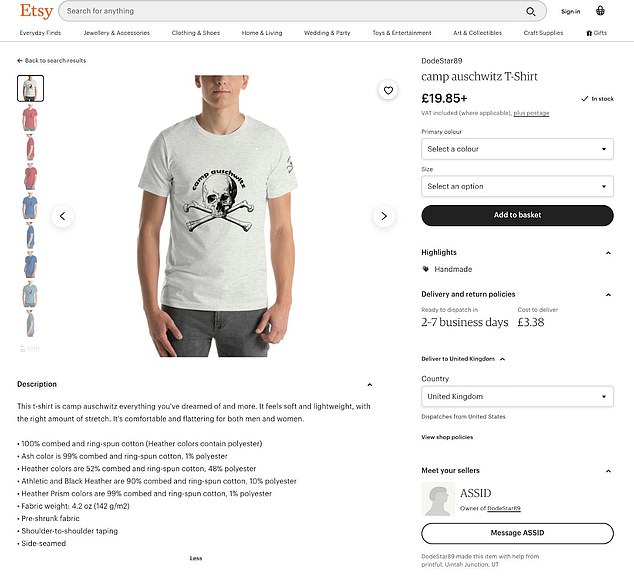 The product description said the T-shirts were: ‘Everything you’ve dreamed of and more. It feels soft and lightweight, with the right amount of stretch’ 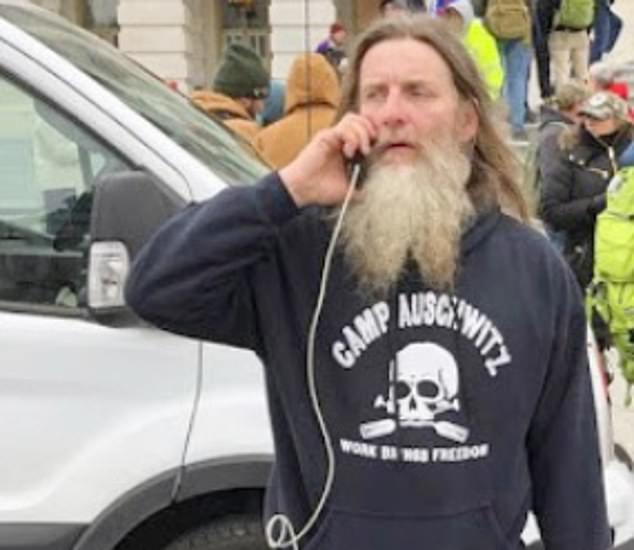 One of those pictured at the Capitol protest wore a racist t-shirt which read ‘Camp Auschwitz’. He has been identified as Robert Keith Packer

The shirt, worn by former welder Robert Keith Packer, also appeared to be printed with the phrase: ‘Work brings freedom’ – a translation of the German phrase on the camp’s gates; ‘Arbeit macht frei’.

Writing on Twitter in response to the Etsy listing, Auschwitz Memorial said: ‘Please remove this. It is painful to survivors and disrespectful to the memory of all victims of Auschwitz.’

Their thoughts were echoed by scores of other social media users, some of whom called for a boycott of the online site.

@drlneah7 wrote: ‘What the actual f*** @etsy? Do you really want to be a platform for Nazis?’

@sk1138-Stephan added: ‘Outrageous, this needs to be removed right away.’

@SCOUTtheDOG commented: ‘Boycott Etsy until they take this garbage down.’

The ‘offensive’ shirt was listed for sale by independent seller ASSID, but the products were removed this morning following the backlash.

Etsy confirmed they had also banned the seller from the site. 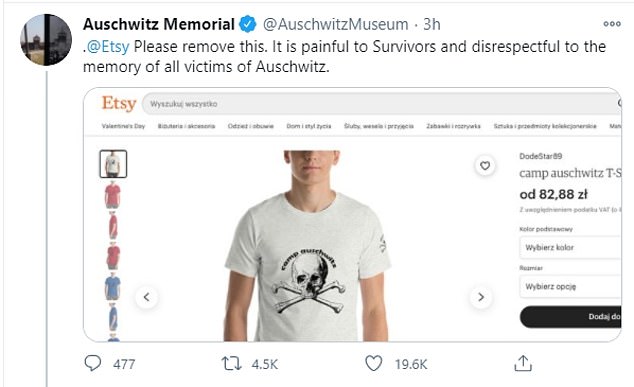 Others called for the immediate removal of the products, calling the listing ‘disgusting’

Auschwitz Memorial works to preserve the largest of the Nazi concentration camp, Auschwitz, in Oświęcim, Poland.

The memorial and museum was created in 1947 and holds a variety of archives and collections as well as research, conservation from the past horrors of the camp and seeks to educate people on the crimes of the Nazis while remembering those who lost their lives.

The controversy surrounding the shirt comes just weeks before the International Day of Commemoration in memory of the victims of the Holocaust on January 27.

A spokesman for Auschwitz Memorial said: ‘The ‘Camp Auschwitz’ sweatshirt was noticed during the violent riots in the US Capitol.

‘Many people tagged us on Twitter to let us know about this particular situation.

‘First of all it is clear that the instrumentalization of the tragedy of people who suffered and were murdered in the concentration and extermination camp as a result of ideology of hatred is always painful.

‘It is painful to survivors and disrespectful to the memory of all the victims.

‘We noticed that this situation raised discussion not only about the symbol itself and about the man who wore the sweatshirt, but also about companies that make profit from selling such products. 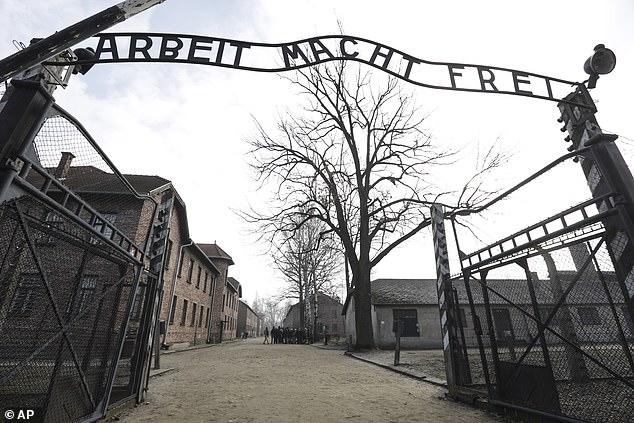 More than 1.1 million people were killed at the infamous Nazi concentration camp during World War II

‘People began to search such companies and request removal of those products and it seems some of these actions have already been successful.

‘They also contacted us for help. In recent days we have asked several online stores to remove such disrespectful products joining many people who expressed their indignation.

‘We believe that selling and making profit from items with such reference to the Auschwitz camp – a place of enormous human suffering caused by hateful ideology, where over 1.1 million people were murdered – is simply not acceptable.’

An Etsy spokesperson told Mail Online: ‘We are deeply saddened by the events that took place at the US Capitol.

‘Etsy’s long-standing policies prohibit items that promote hate or violence, and we are vigilantly monitoring our marketplace for any such listings that may have been inspired by recent unrest.

‘We removed this item immediately when it was brought to our attention and have also banned the shop that attempted to list this item.

‘Items that glorify or violence have no place on Etsy and we are committed to keeping our marketplace safe.’

Can you meet your parents? Confusion after Raab tied himself in knots