Singapore/Denpasar: For two years, Bali has effectively been out of reach for Australian travellers.

Now, finally, the Indonesian island, which welcomed as many as 1.23 million Australians a year before the pandemic, is back open for business.

Bryce Critch, Jessica Cook and their daughter Poppy were among the passengers on board the Garuda flight from Sydney to Bali on Friday.Credit:Amilia Rosa

There were only 61 passengers including 31 Australians on board a Garuda flight from Sydney to Denpasar’s Ngurah Rai International Airport on Friday afternoon, the first direct link there from an Australian city since the virus forced Indonesia’s borders closed in 2020.

But from Monday, Bali will drop hotel quarantine requirements altogether as part of a “island bubble” scheme, an undertaking Indonesian officials hope will accelerate its sluggish reopening to international tourism.

“We’ve been waiting for the first flight from Australia to Bali,” said Bryce Critch, who arrived with wife Jessica Cook and their 11-month-old daughter, Poppy.

“I wanted to come back before everyone comes back – just to enjoy Bali a little bit.”

The couple, who run franchises of the F45 gym chain in Bali’s Seminyak and Canggu areas, had been based in Australia over the past two years as the Indonesian province’s economy was crushed by the impacts of COVID-19 and its health system endured significant pressure.

Rebooting Bali’s tourism sector has been a priority for the Indonesian government of President Joko Widodo, known as Jokowi, from the moment it decided last year to fast-track vaccination on the island before other regions of the archipelago.

The emergence of the Omicron variant was a setback to those ambitions, though, with the government until now delaying plans to lift quarantine protocols, which in turn left airlines hesitant to resume services.

“We’re hoping in the next couple of months everything starts to kind of return to normal and we get some tourists back,” Critch said. 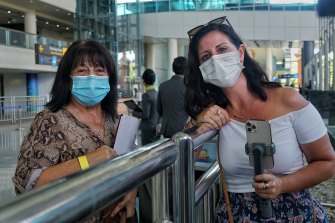 Josie Barron, left, is welcomed at the airport in Denpasar by her daughter Karlie Cummins.Credit:Amilia Rosa

Queensland woman Josie Barron was also on the flight and was visiting her Bali-based daughter Karlie Cummins and her family.

She was apprehensive about travelling for the first time in two years, but found the process to be smooth.

“[I’ve been waiting] over two years. I have not seen my daughter … only on FaceTime,” she said.

“I was really [nervous] about travelling because there was so much paperwork, but my daughter made it easy for me – she did it all for me.”

Lyle Ryder, a British citizen who lives in Sydney, said he had missed the surfing in Bali since his last visit in 2019. “I’ve been waiting a long time,” he said.

Following a PCR test at the airport upon arrival, the passengers on Friday’s flight were still required to spend two nights at a hotel, although the rules enable them to move around the resort they have booked rather than be confined to their room.

Those demands, while being gradually relaxed, have complicated the return of short-term holidaymaking from abroad, as has the absence of direct flights. The latter has meant travellers from Australia have had to make their way to Bali via Jakarta and, more, recently Singapore.

From Monday, however, quarantine on Bali will be waived and visas on arrival will once again be available to foreign tourists. The catch, if they want to travel onward into Indonesia, is that they first have to stay on Bali for three nights.

“The problem with quarantine now will be eliminated with the island bubble,” said Ida Bagus Agung Partha Adnyana, the chairman of the Bali tourism board.

The latest developments in Bali come as other nations in south-east Asia race to reopen and grab a share of the regional tourism market even as Omicron lingers.

The Philippines has joined Cambodia in dumping quarantine for overseas arrivals, Thailand has reduced its isolation requirement to a single night, Singapore has extended a vaccinated travel lane network to 30 countries and Vietnam is easing border restrictions this month.

While Garuda, Indonesia’s state airline, will fly weekly between Sydney and Bali, Australia’s Jetstar previously announced it was also re-establishing direct services from Melbourne and Sydney from March 14.

Black Women and Girls Deserve to be Protected from Violence

Man, 50, arrested for murder of Stuart Lubbock after his body was found in Michael Barrymore's pool 20 years ago