This is the moment a trainee chef was confronted by paedophile hunters after sending explicit messages to an investigator posing as a 13-year-old girl.

Joe Davitt was detained in Salford, Greater Manchester in 2018 after an undercover sting operation by the Catching Online Predators group that was streamed live on its social media page.

The confrontation came after a sting operation involving Davitt and an investigator posing as 13-year-old ‘Lucy’.

Davitt, 22 at the time, sent pictures and a video of his private parts to the investigator, asked her to engage in sexual acts and told her: ‘We can continue talking if you do not tell your parents about it.

‘Don’t tell them as I will get in trouble. I am drunk – you can send me things that are dirty.’

At Manchester Crown Court, Davitt, now 24, of the city’s Burnage district admitted attempting to cause a child to look at images of sexual activity and trying to get a child to engage in sexual acts and was jailed for 30 months.

Davitt was also ordered to abide by a Sexual Harm Prevention Order for ten years and must sign the Sex Offenders Register for life. 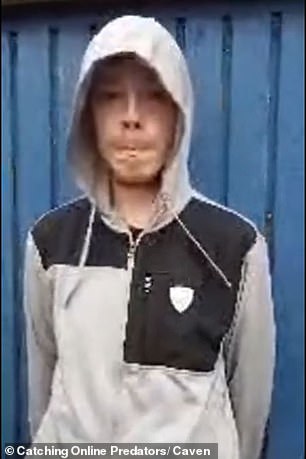 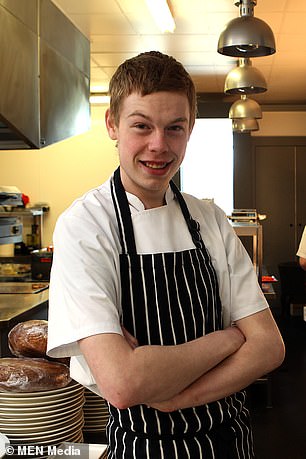 During the confrontation he claimed his Facebook account had been repeatedly hacked and declared: ‘I’ve not spoken to some 13 year old girl. I have to buy a new phone very month because it gets hacked that often. I’ve got bipolar and ADHD – my mental health is going through the roof.’

He was caught two years after he was offered a home and a job as a cook in a restaurant having previously spent most of his life in foster care before sleeping rough.

He had gone public in 2016 about his job offer and troubled life during which he was in foster care from the age of eight to 16 before becoming homeless when he moved out of his foster home.

Bosses at a restaurant in MediaCityUK in Salford Quays offered him work as a trainee chef after social services suggested he help prepare meals for the homeless at a shelter. He was also offered a council flat and even a reconditioned bike to help travel to and from work.

At the time Davitt said: ‘Ever since I was eleven and doing food technology at school I had this dream of being a chef. But I ended up homeless for nine months. Social services found me somewhere then when that broke down I ended up in an abandoned house.

‘This is the first job I have ever had and it has opened so many doors. My ambition is to one day own my own restaurant. An opportunity like this will change my life forever.’

The sting operation took place in November 2018 after the paedophile hunters created a fake profile on Facebook and received a friend request from Davitt.

Prosecutor Jonathan Savage said: ‘His profile showed his age and they started talking and she made it clear she was 13.

‘He said ‘I need to delete you I am 22 unless you want to talk but it is up to you.’ ‘The defendant then suggested they could continue taking if she did not tell her parents about it. He said ‘don’t tell them I will get in trouble.’ 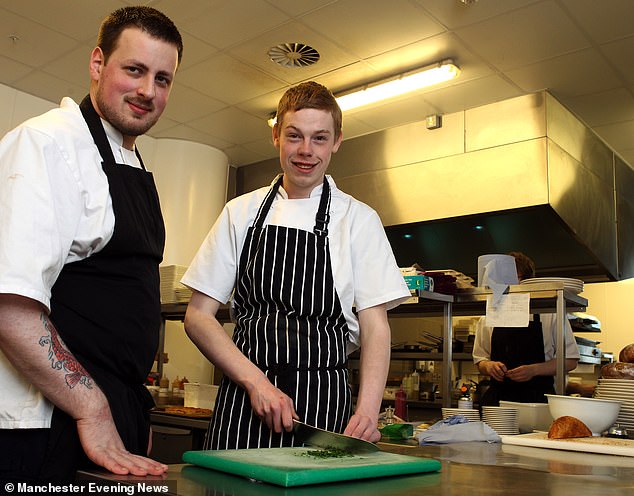 ‘He then said ‘I am drunk you can send me things that are dirty.’ His comments, questions and requests became sexual. He told her not to tell anyone even friends otherwise he would get in trouble.

‘He asked her if she had had sex and she said ‘obviously not I am 13.’ He asked if she wanted to ‘show him’ stuff including her breasts and knickers. She said her father could see pictures on her phone and that her camera was faulty.’

The court heard Davitt asked the investigator if wanted to see his private parts before sending pictures of himself in an aroused state. He then asked her to perform sex acts upon herself adding: ‘Just do it before I get mad..’

Mr Savage said: ‘The communication took place over about 48 hours. The group then decided to confront the defendant. They created a fake profile for someone closer to the defendants age and they agreed to meet in Salford and police were called.

‘The defendant initially claimed his phone was hacked and then said he stopped contact when he found out she was 13.

‘He largely replied no comment when interviewed by police but he claimed he lived with 29 others in a hostel so could not have possibly posted a video of himself. He also denied being a chef. He has no previous convictions apart from a reprimand from 2007 when he was 11.’

In mitigation for Davitt defence lawyer Patrick Harris said: ‘He is not a mature man and has had a challenging upbringing. He had been in care since he was eight and there are gaps in his education.

‘He has ADHD and suffers from depression and anxiety. These exchanges took place from 11.30-12.45 and then briefly the next day. He says he soon came to his senses and realised what he did was wrong.’

Sentencing the judge Miss Recorder Mary Loram QC told Davitt: ‘You contacted Lucy and quickly the exchange became sexual. She repeated her age to you but you believed she was sexually experienced. If this had been a real child it would have been an extremely distressing experience for her.

‘You tried to excuse your behaviour saying you were drunk. I accept you are still in your 20s and have difficulties but those factors do not come close to explaining your clear sexual interest in children.’