London: The most violent political protests to hit Paris in a decade took almost everyone by surprise on the weekend – even some of the protesters.

But they have tipped France’s president Emmanuel Macron into a serious political crisis. Until now his presidency was bleeding air like a deflating balloon. This could be the moment his authority suddenly bursts. 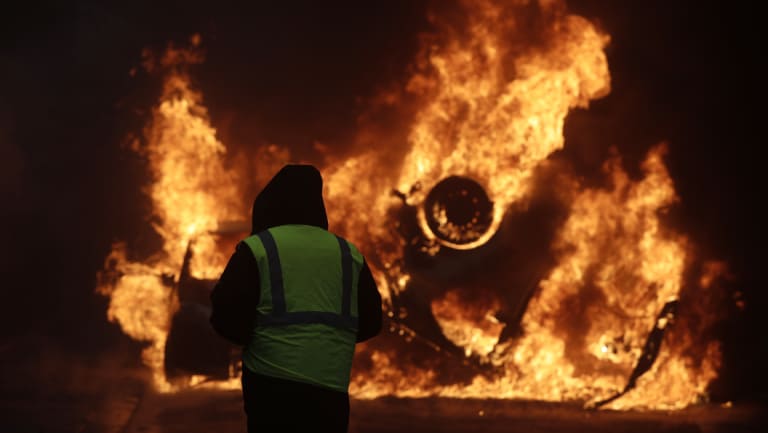 A demonstrator watches a burning car near the Champs-Elysees during a demonstration on Saturday.Credit:AP

One Le Monde columnist wondered on Sunday if May 1968 was playing out again: if this is a revolution, a “long and violent challenge to power” rather than just a pre-Christmas venting of anger.

The gilets jaunes, the fluorescent yellow jacket-wearing campaigners, came from all over France in what had begun as an anti-tax crusade. It became the seed to a bigger crystallisation of dissatisfaction.

The movement was a loose alliance of mostly young people in rural and regional France. They were angry about a diesel tax increase of 7.6 euro cents a litre, which is designed to align diesel and petrol taxes after new research exposed the particle pollution put out by diesel engines.

“Those who complain about higher fuel prices also demand action against air pollution because their children get sick,” Macron said, in response to early complaints about the tax. 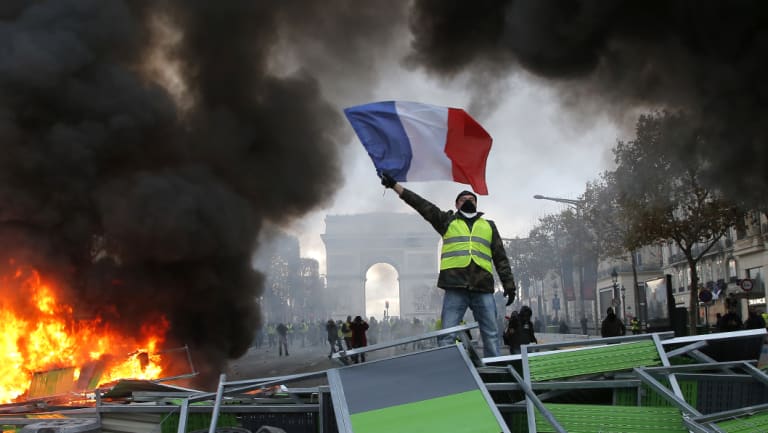 A demonstrator waves the French flag on a burning barricade on the Champs-ElyseesCredit:AP

But his typically high-handed response enraged dissenters. In rural areas, outside the reach of light rail or Uber, it was seen as yet another slap in the face from a disdainful leader.

“Every month we end up 500 euros in the red,” one woman from Lorraine in north-east France told AFP on the weekend. “This violence, it’s legitimate.”

In mid-November they got organised on Facebook and started blocking roads across the country. The very first day saw 280,000 yellow vests on the nation’s streets.

A week later, a protest in Paris turned violent.

At this stage the gilets jaunes were no longer alone, and the protests were becoming a wider revolt against Macron’s policies and leadership style. One poll found two-thirds of the country supported the protesters. 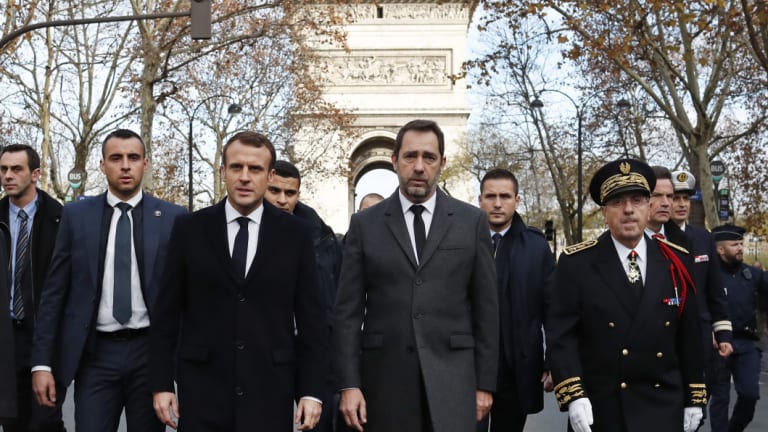 This weekend was the third successive Saturday citizens’ march in Paris organised on social media. It began peacefully but quickly went out of control.

Interior Minister Christophe Castaner claimed that “professional rioters” had organised the violence, hijacking the movement and exploiting it for their own ends.

Journalists on the ground said it was not as simple as that.

AFP reporters observed genuine gilets jaunes in the heart of the action, wearing balaclavas, building the barricades against police. They also saw many “experienced protesters” from both the hard left and far right, eager to clash with police. 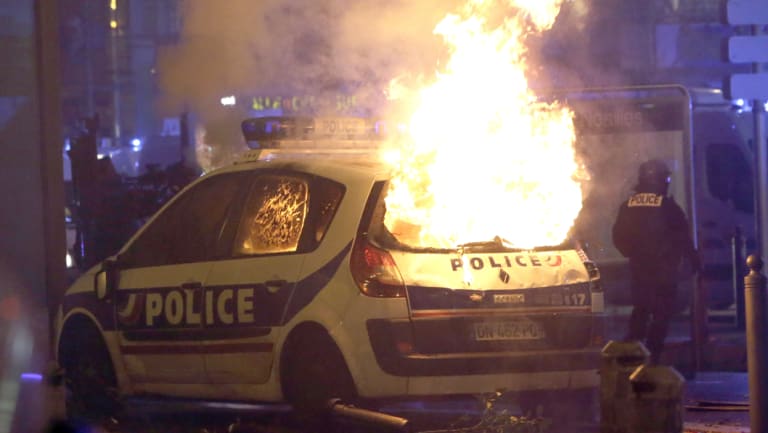 A police car burns after clashes between police and protesters, in Marseille, southern France, on Saturday.Credit:AP

“They knew how to burn a barricade or a car, and when the police first tear gas they gave advice to those around them, telling them not to panic and not to run,” AFP journalists reported.

A number of news organisations also drew attention to the fact that a large amount of fake news – pictures of bloody faces taken from protests in Spain last year, videos from other unrelated protests – had been disseminated via social media in the lead up to the protests.

Saturday's riot featured anti-capitalist slogans and saw far-left graffiti (one scrawl on the Arc de Triomphe read “topple the bourgeoisie”). Members of far-right groups were also in the crowd, reportedly having organised on social media to join the fray. 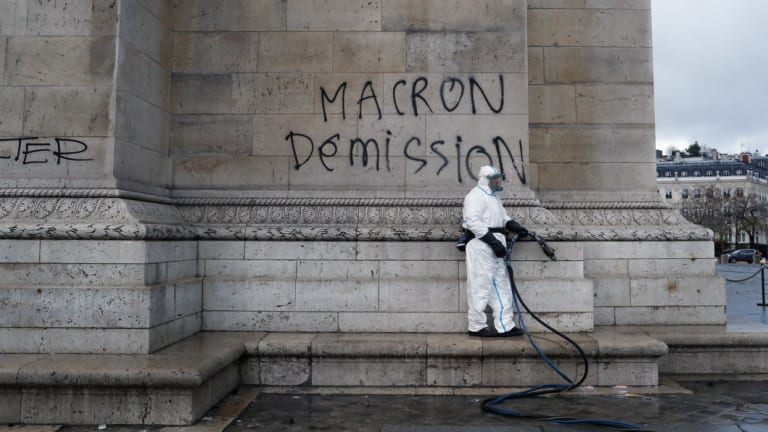 A worker about to clean graffiti saying ” Macron resignation” on the Arc de Triomphe.Credit:AP

Police made almost 380 arrests on Saturday. The Paris prosecutor said many of them had “come to fight police while claiming to be part of the gilets jaunes movement”.

Some gilets jaunes protesters told reporters they believed the violence would damage their cause.

There were signs on Sunday that the government would toughen its line rather than compromise with the protest movement, which is demanding a reversal of the fuel tax hike and a rise in the minimum wage.

A week ago, Macron had responded to the protests by promising talks with the demonstrators – though it was hard to work out who he was going to talk to, as the movement had no obvious leader. 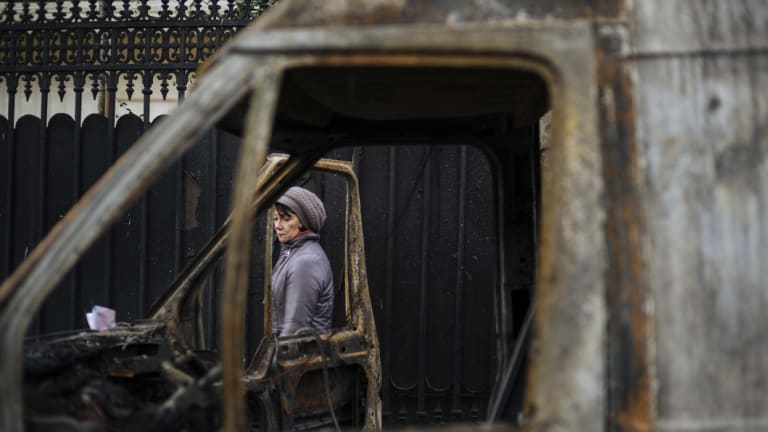 A woman and a burned out vehicle, near the Arc de Triomphe, in Paris, on Sunday, local time.Credit:AP

At crisis talks at the Elysee Palace on Sunday, Macron asked prime minister Eduoard Philippe to meet representatives of the demonstrators, along with other parliamentary party leaders.

But Macron also asked his Minister of the Interior to look at whether police procedures needed to be reviewed for the expected future protests, next weekend and beyond.

There were conflicting reports that they had discussed declaring a state of emergency.

For the first year of Emmanuel Macron’s presidency, observers were surprised at the muted level of protests in a country, and a capital, where political protests are traditionally fierce. 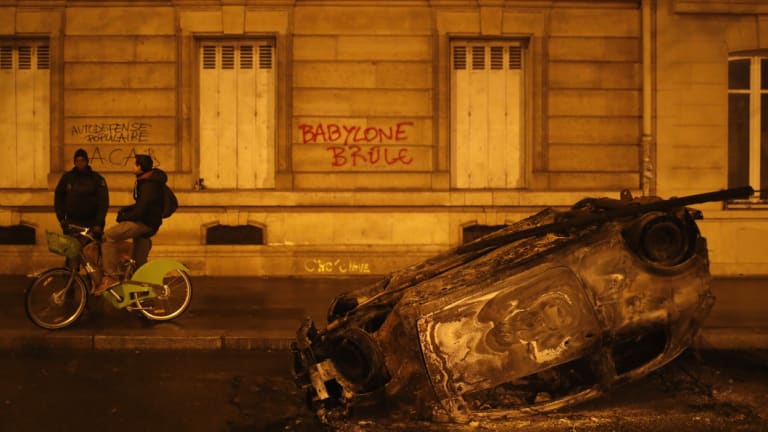 A burned out car and the slogan, “Babylon burns” in Paris on Sunday, local time.Credit:AP

There was a sense the country was giving this populist centrist a chance to deliver on his promise to solve France’s problems with a clean break from the old political system.

But a third of voters had preferred the far-right Marine Le Pen to his offering, many abstained from the ballot altogether, and the left have become increasingly angry at Macron’s reforms which have, mostly, concentrated on helping businesses and the top end of town.

He inherited a country itching for a revolution, and if he is seen as having failed to deliver one, the French may have decided to inflict another.

Laurene Powell Jobs: 5 Things About Steve’s Widow Under Attack By Trump For Owning The Atlantic

How tall is Barron Trump? – The Sun