Haven’t they heard of flat pack? Passenger has to scale 20-foot high pile of furniture balanced on pick-up truck to free it from power lines as vehicle drives down the street

While moving house is typically not the most exciting thing to do, one passenger had a near electrifying experience when he scaled a 20-foot high pile of furniture which had snagged on live power lines.

A pick-up truck on a busy road in Korat, south Thailand, with a massive stack of belongings strapped to the roof, became stuck when its bamboo armchairs got caught in the overhead cables.

Not wanting to knock off his load, the driver sent his fearless passenger to climb the mountain of furniture and lift up the wires to free the vehicle. 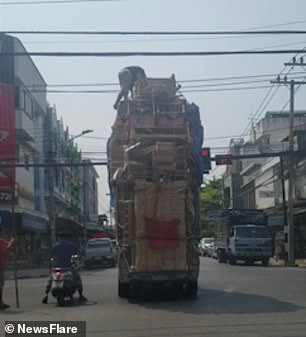 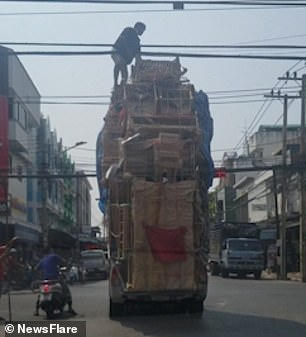 Footage from the passenger in the car behind shows the pick-up truck stopped in the middle of a main road on an urban street.

Traffic continues to pass by as a man in white shorts and a dark top carefully climbs the left side of the furniture pile.

Standing next to the vehicle is another man who appears to be holding a long pole which may have initially been used to try to dislodge the wires before proving to be too short.

Several power lines cross the short stretch of road in front of the car which means the passenger has to untangle one wire then cling on as the driver slowly edges forward to the next one.

Towards the end of the 55-second clip a bemused motorcyclist pulls up next to the vehicle and looks on in awe at the daredevil climber.

But the driver sat in the car behind, 36-year-old Kajorn, was not impressed by what he saw.

He said: ‘This wasn’t safe. The load was much too high and they aren’t allowed to climb on top of the truck like that.

‘I’m sure that if the police had seen it they would have given them a traffic fine.’ 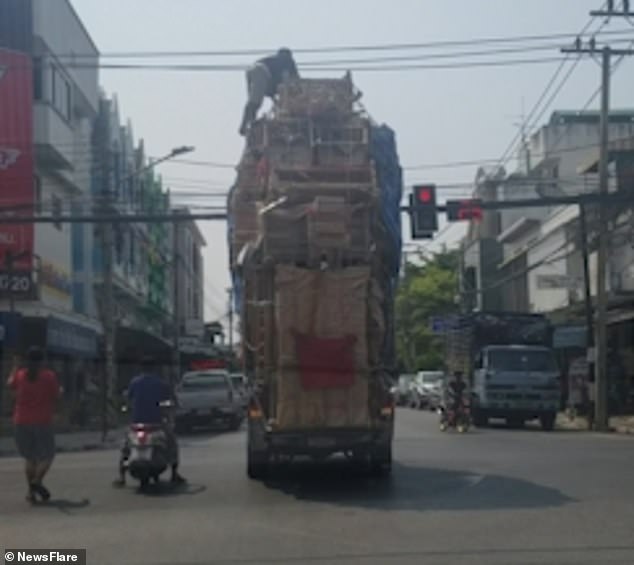 Kajorn, 36, who was driving the car behind, was not impressed and slammed the daredevil pair as dangerous

School and other cancellations in southern Manitoba for Thursday