Copenhagen: Six people have been killed in Denmark after a passenger train hit a trailer that blew off a freight wagon coming the other way.

The train, with 131 passengers on board, was heading towards the capital Copenhagen when it hit the trailer. 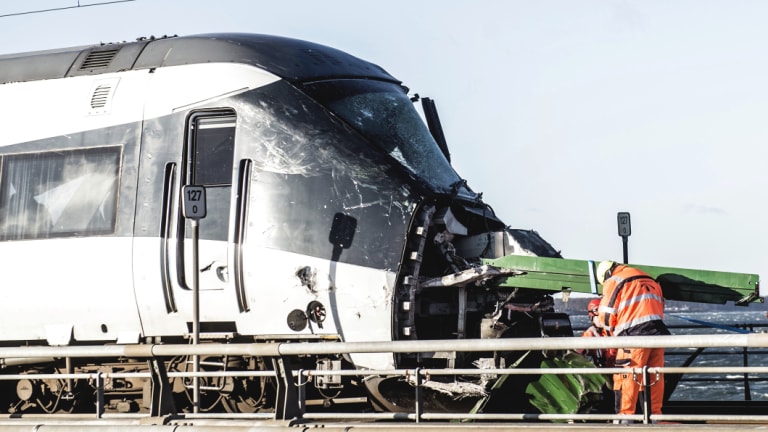 Rescue workers at the site of a train accident on Great Belt Bridge in Nyborg, in Denmark.Credit:AP

Sixteen people were injured but none critically, police said.

The accident happened shortly before 7.35am local time on Wednesday during a severe storm.

The weather hampered the rescue operation on the 18km Great Belt Bridge between Zealand and Funen, Denmark's two major islands.

"Ordinary Danes on their way to work or on the way home from Christmas holidays have had their lives shattered," he tweeted.

A preliminary investigation by the Danish Accident Investigation Board showed a trailer had blown off a freight wagon onto the tracks, a spokesman said.

"There was a very, very loud bang and then the train stopped," a passenger told broadcaster TV2.

"Terrible train accident on the Great Belt Bridge in Denmark as a result of the storm Alfrida. Our thoughts are with the injured and with the families and relatives of the dead," he tweeted.

Crates of beer could be seen inside.

A train operated by DB Cargo, which carries goods from Carlsberg's Fredericia brewery to Copenhagen, was involved in the accident, a Carlsberg spokesman said.

‘If you asked me 20 years ago, I would’ve laughed’: Angelina Jolie hints at move into politics