The elderly and vulnerable have queued for more than two hours in the cold for a coronavirus jab at a Birmingham GP hub, according to the mother of an extremely vulnerable teenager.

Nicola Leadbetter was greeted by a substantial queue outside a surgery in Yardley when she arrived for her teenage daughter Victoria’s 10.10am vaccination yesterday.

Victoria was invited for her vaccination by her GP, who deemed her clinically extremely vulnerable, but most of the others waiting in the queue were over 75.

When they arrived they found a queue snaking away from the surgery along the edge of the neighbouring rugby pitches and Billesley Common. 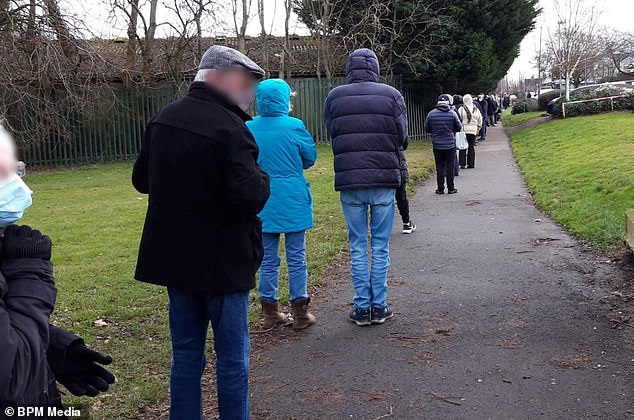 Nicola Leadbetter was greeted by a substantial queue (pictured) outside a surgery in Yardley when she arrived for her teenage daughter Victoria’s 10.10am vaccination yesterday 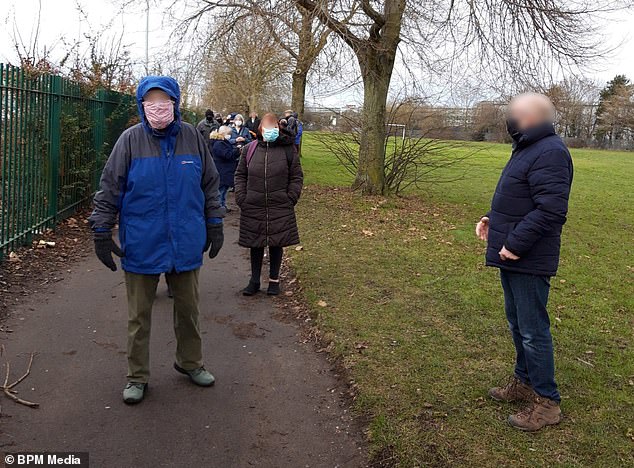 Ms Leadbetter said: ‘There were hundreds in the queue. We waited over two hours in all – we arrived at 9.30am, for a 10.10am appointment, but it was two hours before we got in and we finally left at 12.20pm.

‘It was really cold, there was nowhere for people to sit while queueing, and no time order, so you couldn’t sit in your car and then come out at the last minute.

‘The lack of organisation was appalling – leaving the elderly to stand in the cold that long. We were queueing for nearly three hours in all.’

Nicola said queues ran along the footpath between the two outdoor venues, and those queueing wore masks, kept their social distance and waited patiently in ones and twos. 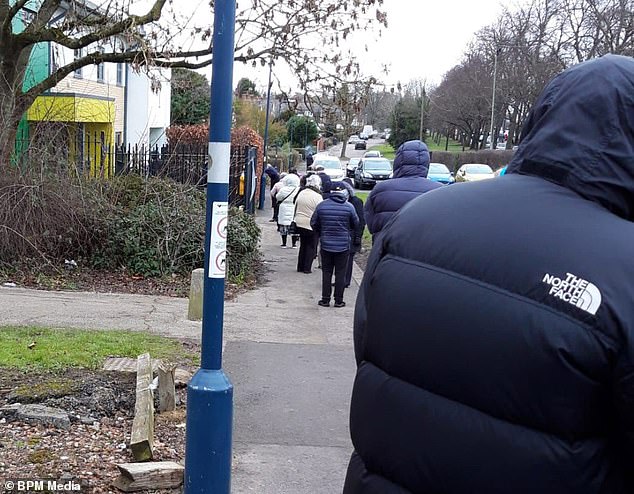 Green Ridge is a vaccine hub for several GP practices in the area as part of the rollout of the Oxford-AstraZeneca vaccine.

Meanwhile, a queue of more than 70 cars waited for almost half an hour outside a coronavirus testing centre after an ‘opening times mix-up’, leading to an investigation by a local council today.

The Isle of Wight Council said it would try to find out why some people were told to arrive at 9.30am when the Medina testing site on the island, in Hampshire, did not open until 10am.

In a statement, the council said: ‘Please don’t arrive early for your booked COVID-19 test. This morning saw over 70 cars queueing at 1Leisure Medina for 25 minutes before the centre opened.’

The council received furious complaints from those who said they had been told to arrive earlier than the centre opened.

Tracey Hayward, posting online, said: ‘My partner had an appointment supposedly at 9:30 am. I made the phone call to 119 and that was the appointment they gave me with a text confirmation!

‘When he arrived there there was no testing facility etc to be seen but more cars were turning up. At about 9:55 he saw someone in a hi vis so asked what’s happening to which he was told we don’t open until 10!

‘So he was there half an hour early through no fault of his own! So I’m not surprised there was queues etc. They were probably backlogged!’

It was not known how many others in the queue had received a similar communication to that of Ms Hayward or why so many drivers had arrived early to the testing site.

A spokesman for the Isle of Wight Council, responding to Ms Hayward’s complaint, said: ‘This should not have been the case. We are finding out what happened.’

Health Secretary Matt Hancock has pledged the Oxford jab will be used to vaccinate the four most vulnerable groups – over 70s, social and health care staff and the clinically extremely vulnerable – by Valentine’s Day.

A total of 20 GP primary care hubs are now in action across Birmingham and Solihull.

The city’s first mass vaccination centre, in Millennium Point in the city centre, opened yesterday and the city’s main hospitals are offering vaccinations for patients and staff.

Why are Prince Andrew's lawyers such a secret?

‘Donald’s right’: Putin says US Syria pullout is the ‘right thing to do’

Barbara Bush so upset by George’s affair she considered suicide