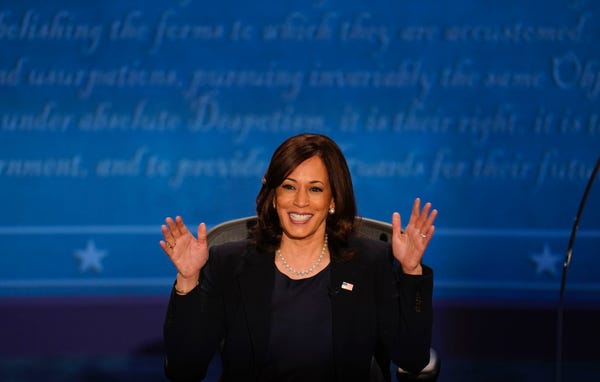 A day after a Republican senator from Georgia mispronounced and mocked his colleague Kamala Harris' name, social media users rallied in her defense.

The hashtag #MyNameIs took over Twitter, with celebrities, politicians, and people of color all around sharing the correct pronunciation and origin of their name.

Sen. David Perdue, meanwhile, is facing backlash for repeatedly mispronouncing Harris' name at a rally for President Donald Trump on Friday. Many people, Harris' staff included, have denounced his mockery of her name as racism.

At the rally in Macon, Georgia, Perdue was addressing the crowd ahead of the president's arrival.

"But the most insidious thing that Chuck Schumer and Joe Biden are trying to perpetrate — and Bernie and others with them — and Kah-MAH-la, KAH-mah-la, Kah-MAH-la, Kamala-mala-mala, I don't know, whatever," he said, to the sound of laughter from the audience.

"Well that is incredibly racist," Sabrina Singh, Harris' campaign press secretary tweeted. She also said that Perdue and Harris have been colleagues in the Senate for more than three years and they have interacted on the floor on several occasions. The two also serve on the Senate Budget Committee together.

His remarks didn't land with politicians and other social media users either, who generally viewed his mockery of her name as disrespectful and deliberate.

Perdue is up for reelection this November. His Democratic challenger, Jon Ossoff, also slammed the remarks.

"Senator Perdue never would have done this to a male colleague," Ossoff tweeted. "Or a white colleague. And everyone knows it."

Since the remarks went viral, Perdue's campaign has tried to downplay them. Campaign Communications Director John Burke said the senator "simply mispronounced Senator Harris' name, and he didn't mean anything by it."

Harris has spent years teaching people the correct way to pronounce her name.

In 2016, she released a video on the correct way to pronounce her name. In the video, kids went through the wrong pronunciations until one kid said it correctly. Her name is pronounced "comma-la."

When Harris ran for president last year, pundits and lawmakers continued to mispronounce her name.

In her 2019 memoir, "The Truths We Hold," Harris again addressed the correct way to pronounce her first name.

"First, my name is pronounced 'comma-la,' like the punctuation mark," she wrote. "It means 'lotus flower,' which is a symbol of significance in Indian culture. A lotus grows underwater, its flower rising above the surface while its roots are planted firmly in the river bottom."

Harris will become the country's first Black Indian-American vice president if she and Democratic presidential nominee Joe Biden are elected this November. She will also be the first woman vice president.

Despite her years-long tenure as a lawmaker and her rise to the top of the vice presidential ticket, people still mispronounce her name.

Trump has repeatedly mispronounced her name. In an interview with the New York Times last year, Trump pronounced her first name as Kah-MEE-La. He's also pronounced it incorrectly during White House press conferences.

People’s Vote London march – when is the Final Say rally and what's the route and what time does it start?

The Undertaker is Rumored to Return For WWE Survivor Series 2020

Therapy for a Jets fan: ‘I can’t take it anymore’