Perisher Ski Resort is not liable to pay damages to a woman who was injured when one of its ski instructors collided with her because the accident was an "obvious risk" of engaging in a dangerous recreational activity, the NSW Supreme Court has found.

Justice Richard Cavanagh found in a decision this month an August 2014 collision between the woman and a ski instructor employed by Perisher, both competent and experienced skiers who were not skiing together, was caused by the negligence of the instructor. 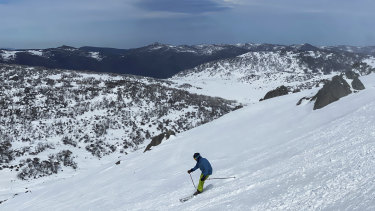 Perisher was not liable for the negligence of their instructor, the NSW Supreme Court found.Credit:Alex Ellinghausen

However, Justice Cavanagh found Perisher did not have to pay damages because it could rely on a defence in the state's Civil Liability Act (CLA) which carves out liability for negligence in cases where the harm suffered by a person is the "result of the materialisation of an obvious risk of a dangerous recreational activity".

This was "another sporting injury case in which the defendant has the benefit of the dangerous recreational provisions of the CLA", Justice Cavanagh said.

Lawyers for the woman had argued skiing was not a dangerous recreational activity as defined by law, nor was the collision in question an obvious risk of skiing.

He noted it was surprising there "has not been any higher authority on the proposition that skiing is a dangerous recreational activity", such as a decision of the NSW Court of Appeal or High Court.

Justice Cavanagh said when assessing whether there was an "obvious risk" in this case, it was to be framed generally as a risk of collision between skiers, rather than a risk of a competent and experienced skier colliding with an instructor. When the risk was framed in this way, he said the risk was obvious.

"It would have been obvious to a reasonable person in the plaintiff’s position that if another skier lost control or was not doing what he or she should be doing on the slopes, a collision might ensue and significant injury might be suffered," he said.

The court heard the woman sustained a number of life-changing injuries, including to her right hand, left shoulder and left knee, and developed post-traumatic stress disorder after the accident. She had undergone surgery and been treated by a range of specialists including physiotherapists, hand therapists and chiropractors.

Justice Cavanagh said if he was wrong about the defence being available to Perisher, he would have awarded the woman $651,801.17.

The woman's solicitor, Lough & Wells Lawyers partner Trevor Wells, said the result was disappointing and the firm was reviewing the decision.